Emptying Out the Spring Training Folder

Seeing as though it is the last day before the 2015 baseball season opens I thought it might be a good time to clean out the photos from my spring training folder.

I've really begun to fall for this Cubs team.  There are some great people who make up the roster, who do wonderful things in the community. 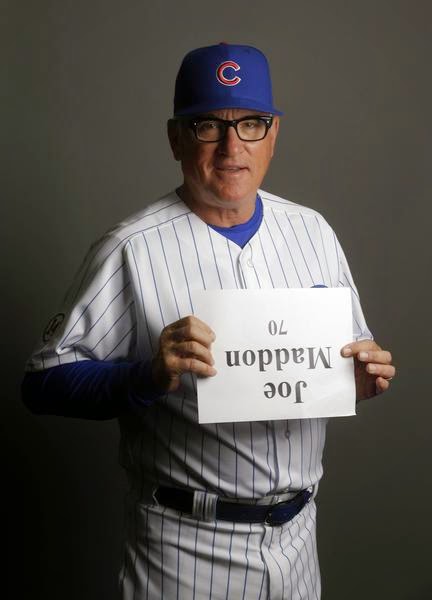 Joe Maddon, the new manager, brought up the idea of shaving the players' heads to help support pediatric cancer patients.  As you can tell from the picture above Joe Maddon likes to keep things loose.  (At least I'm hoping he intentionally holding his name placard upside down on purpose to get a laugh.) 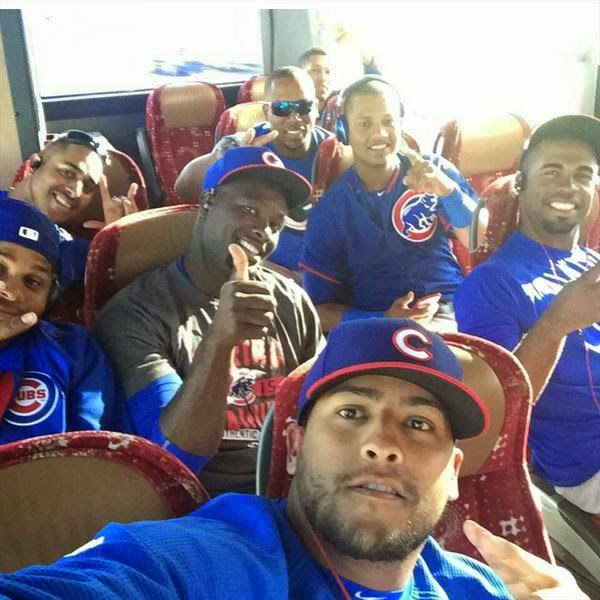 Most of the Cubs 40-man roster jumped on board and went under the clippers for a wonderful cause.  As you can tell from this back of the bus selfie by Matt Szczur it looks as though their hair is growing back just fine.

The picture below was taken early in camp, before the Respect Bald event, and it features two of the strongest men in the Cubs lineup. 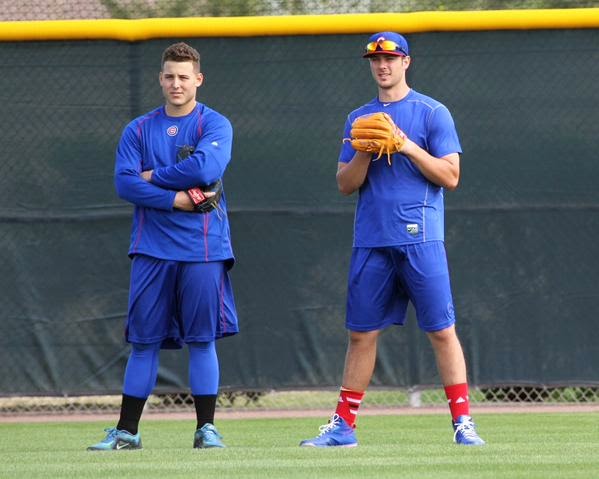 Rizzo should put up big numbers this year, but more important is the fact that he's had Kris Bryant's ear for part of the spring.  From everything I've read it seems as though Bryant has his head screwed on straight, but being able to lean on Rizzo and his experience will be akin to having an ace up his sleeve.

Everyone knows Bryant's name by now, and most everyone understands the reasons for him starting the year in Iowa.  Some are even having fun with it.

The Cubs prospects put on a nice show this spring, and in one particular game Javier Baez, Jorge Soler, and Kris Bryant went back-to-back-to-back. 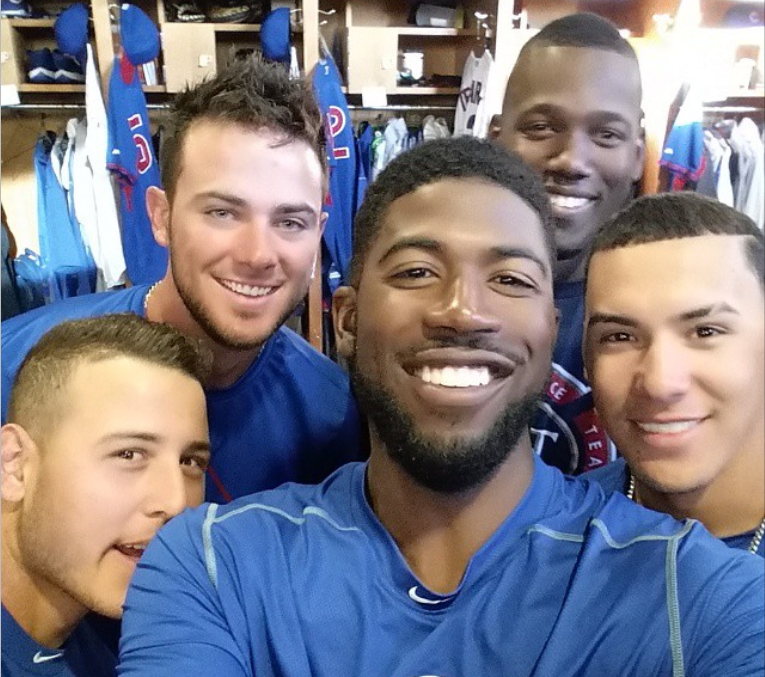 I think Dexter Fowler might be my new favorite Cub.  The upside is he's a great person and he can be the leadoff hitter the team has been searching for.  The downside is that he is only signed for one year and the minor leagues are ripe with talent to replace him.

More prospects!   On the left we have my first glimpse of the Cubs 2015 #1 draft pick, Kyle Schwarber, donning the tools of ignorance. 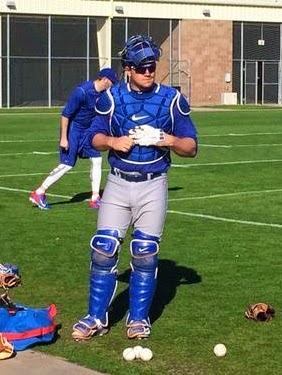 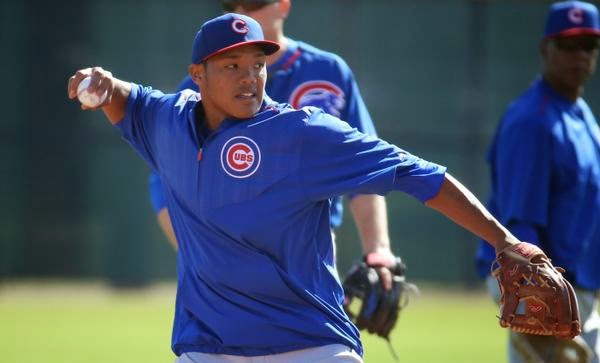 On the right we have a picture of the slick fielding Addison Russell.  It appears he is throwing a two-seamed fastball across the diamond from the shortstop position. I was always taught to grip the ball across the seams (4-seamer) when making defensive throws, but maybe that's not the Cubs Way?

I think Will Ferrell is explaining just that to Addison Russell here.
The Will Ferrell game was a bunch of fun to watch and then rehash later, and I think this picture captures it all the best.  It's hard not to laugh at Ferrell when he's doing a schtick.

I think Jon Lester's contract may have something to do with prices for tickets going through the roof. 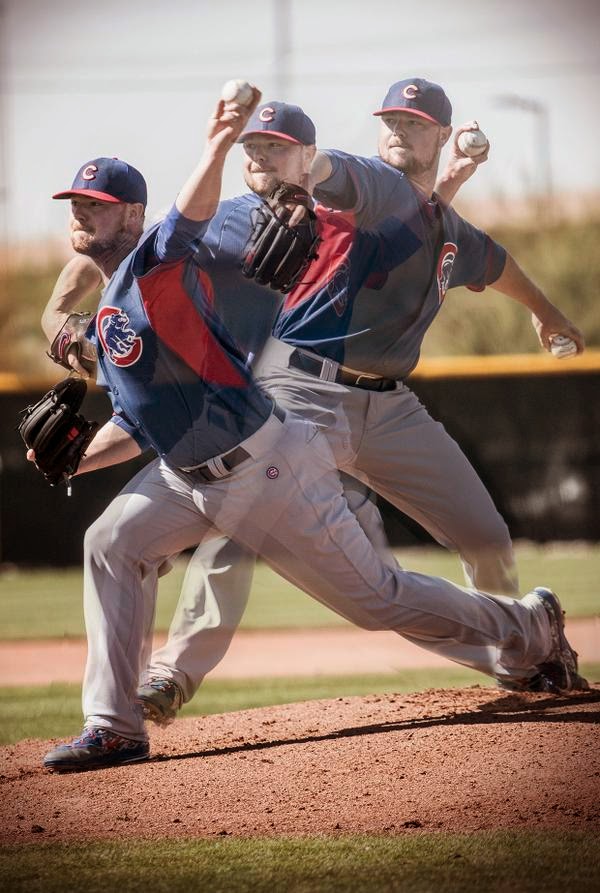 It's a simple case of supply and demand.  Cubs tickets are in demand and there's a shorter supply than normal because the bleachers aren't scheduled to open until May (LF) and June (RF). 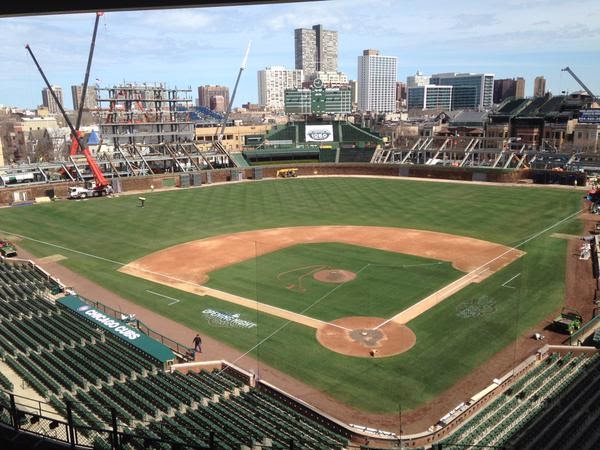 The picture above was from late March and the one below was just from a couple of days ago. 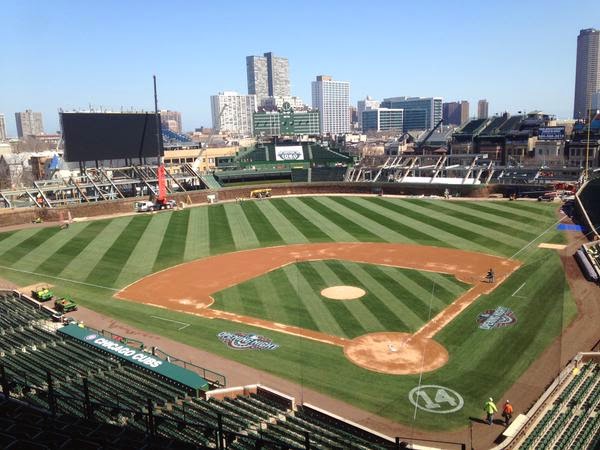 Not a ton of changes, but it appears that the left field video board is up for ESPN's Sunday Night Baseball.

Thanks for stopping by today and visiting my picture heavy post.  Go Cubs!