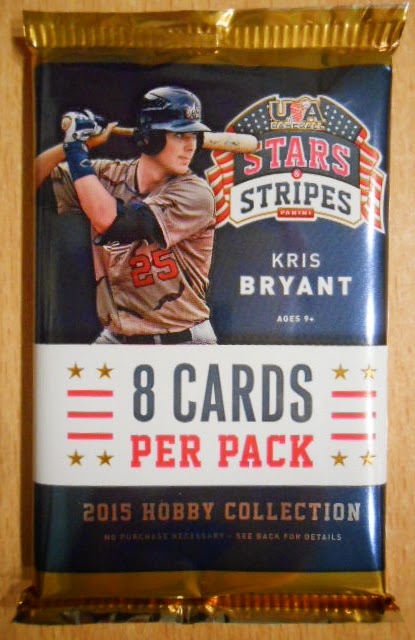 I've had my eye on this set for awhile. I didn't jump on board with the 2013 version of Stars and Stripes, because I didn't know it was out there.  I consider myself a little bit of a prospector and like the idea that Panini doesn't have to work around the absence of MLB logos.

Let's break open a pack and see what it's all about.

The first card is a guy I don't know, but I'm okay with that.  Austin Bergner is a junior in high school and won't be eligible to be drafted until the summer of 2016. 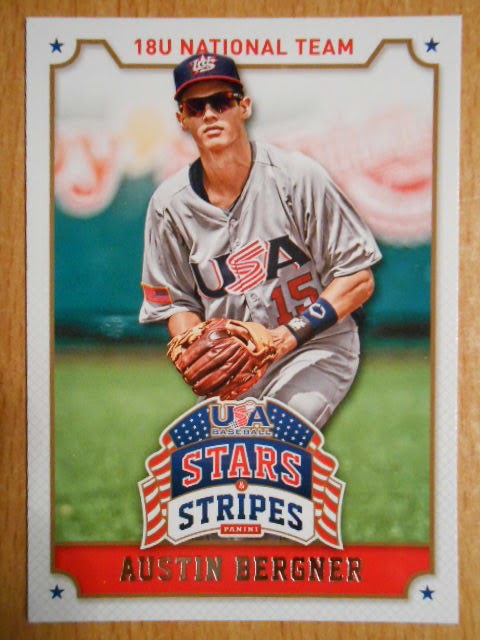 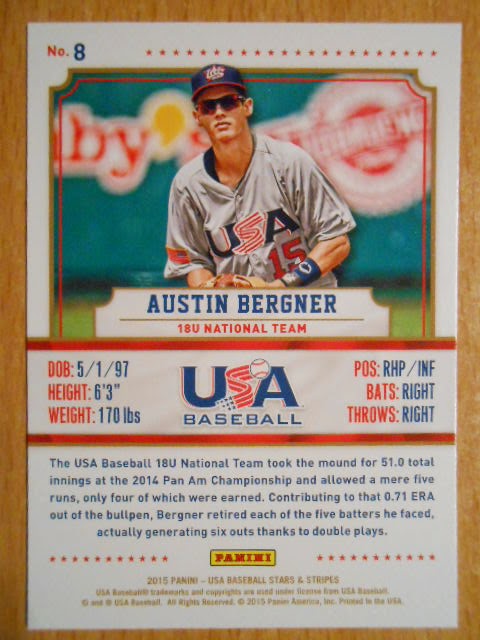 The backs of the cards have a simple write up about the player's history as member of the USA National Team(s) and a few stats.  I wish they didn't use the same photo as the front, but I have to figure there probably aren't too many pictures floating around of these guys. How neat would it have been if the player was featured in their USA uniform on the front and then their high school or college uniform on the back?  I could dig that.

Alejandro Toral was born in 1999.  Let's not talk about him.  He's just going to make me feel old. 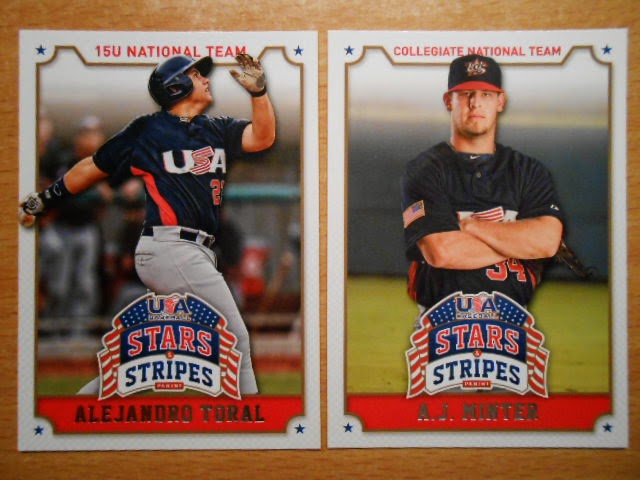 A.J. Minter is a junior pitcher at Texas A&M and started off the season strong, but he had Tommy John surgery last month.  Good luck with your rehab, A.J.

Justin Garza is a junior pitcher at Cal St. Fullerton.  He's healthy and will be draft eligible this summer. 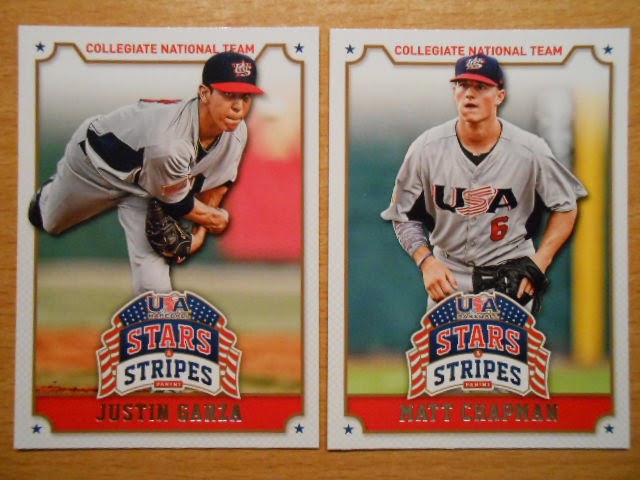 Matt Chapman, and third baseman, was drafted by the Athletics in the first round of the 2014 amateur draft.  He go his feet wet in the Midwest League last summer and struggled a bit. He has yet to play in 2015. 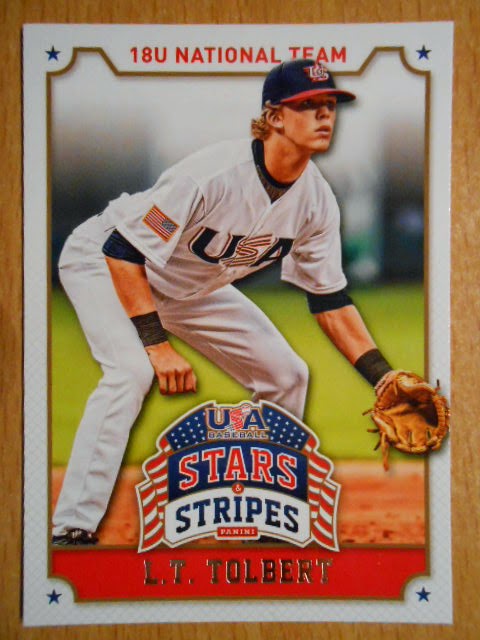 L.T. Tolbert captured the MVP award from the Under Armour game at Wrigley Field last August.  He's a senior in high school and has a commitment to play for the Gamecocks next spring.

On to the inserts!

The Crusade inserts are shiny and thick.  Maybe it's my Swedish bloodlines, but I really like the yellow and blue background.  And like most card collectors, I'm a sucker for shiny! 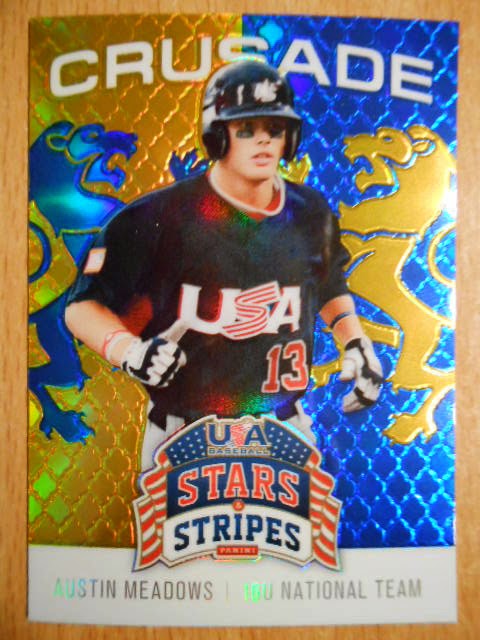 Austin Meadows was drafted seven slots after Kris Bryant in the 2013 draft. He's off to a hot start in the Florida State League and owns a lifetime 0.320 minor league average.  From everything I've read it sounds like the Pirates have a pretty nice prospect on their hands, but the Bucs' outfield right now is stacked: Polanco, Marte, and some guy named McCutchen.

Daz Cameron, the son of Mike Cameron, is high school outfielder in Georgia who graduates his May.  He is being touted by many of the draft pundits as a first round talent. 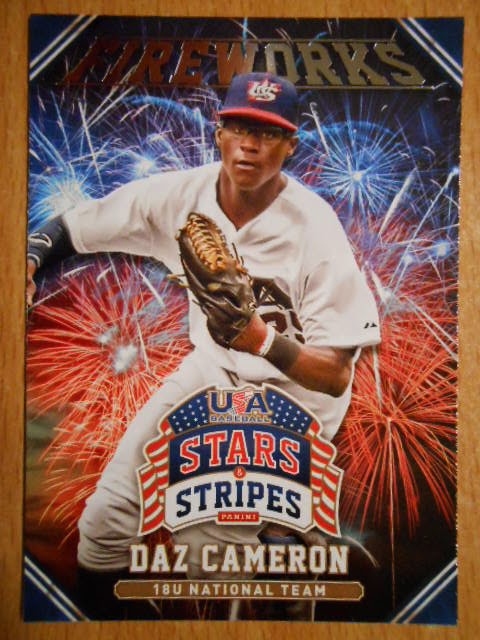 The Fireworks insert is not particularly shiny, but it is well done. There are other insert sets in Stars & Stripes including Champions, Statistical Standouts and Diamond Kings. I'm pretty stoked about the Diamond Kings.

It'll be fun to follow some of these guys as they make the jump to professional baseball.  And who knows, maybe there are some future Cubs in the mix.  Theo likes to draft guys who have already gone through Tommy John surgery . . . yep, I'm looking at you A.J. Minter.