What list might that be?  Well, I guess it's technically not really a list as much as it's a receipt from the post office.  Most of you know what I'm talking about by now, but if you aren't part of the in crowd then take a second to fill yourself in.

Yes, I'm a recipient of one of the Junior Junkie's padded yellow mailers from Louisiana.  T.J. and I didn't have a trade history until he reached out to me about a month ago.  It was a slow developing trade, but well worth the wait on my end. 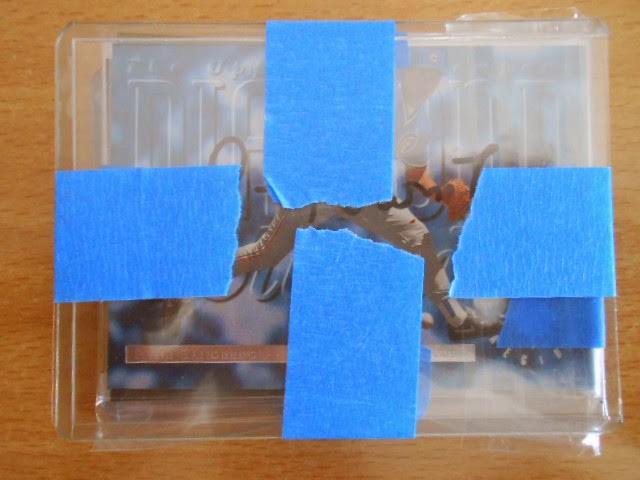 Look at all of that marvelous blue tape.  T.J., you're going straight to good guy list.

The first thing I noticed in the package was a nice brick.  It was a 1994 Williamsport Cubs team set from the short season New york-Penn League. 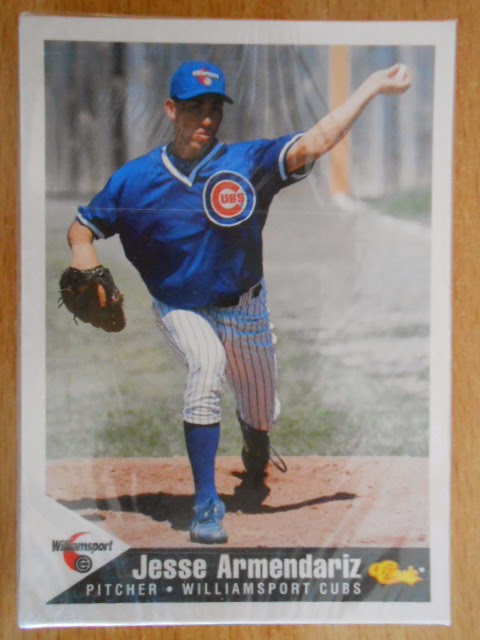 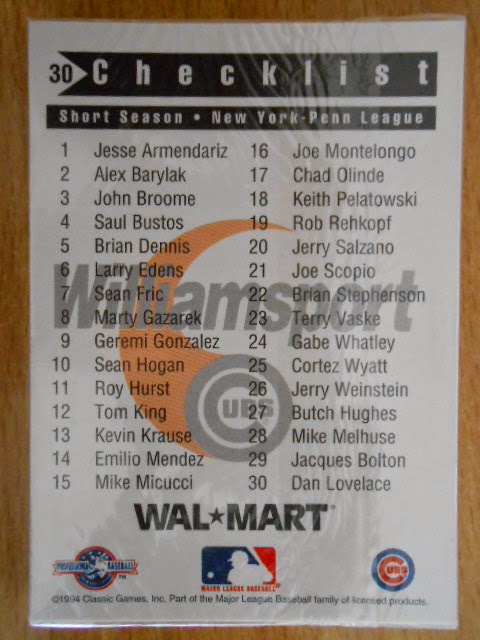 There's only two names on that checklist I recognize and one of them never made the major league roster.  Brian Stephenson was the 2nd round draft pick of the Cubs in '94, but he never got higher than double-A.  Geremi Gonzalez burst onto the scene in 1997 and pitched well that year for a bad Cubs team.

Next up we make a stop to the Kerry Wood player collection.  I have the two gold bordered cards, but not the silver. 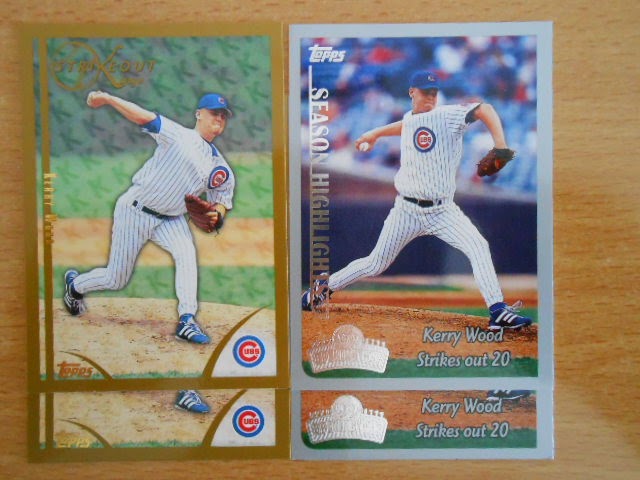 The silver bordered cards are from the 1999 Topps Opening Day set.  I didn't know Opening Day was around in the 90s. Good to know. 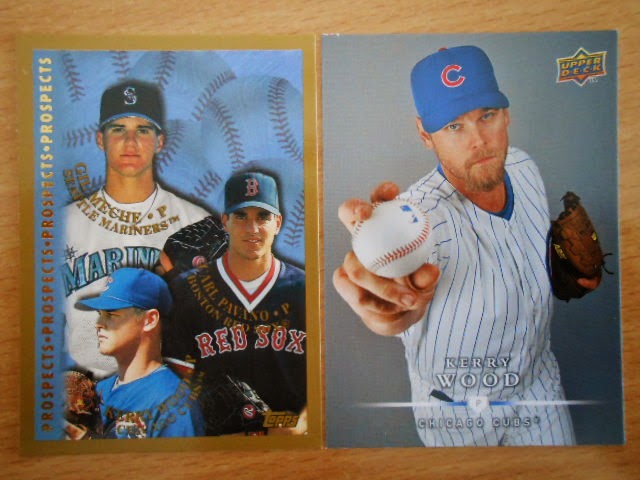 Kerry's cards always have a home with me, even if they're dupes!  I think the Upper Deck card may make it's way onto my new TV stand I just finished making.

Oooooh, shiny!   I love the International Parallels from Bowman. I prefer the United States' flag to the other varieties: maps or state flags.  This is also one of my earliest cards of Kerry on cardboard (1997). 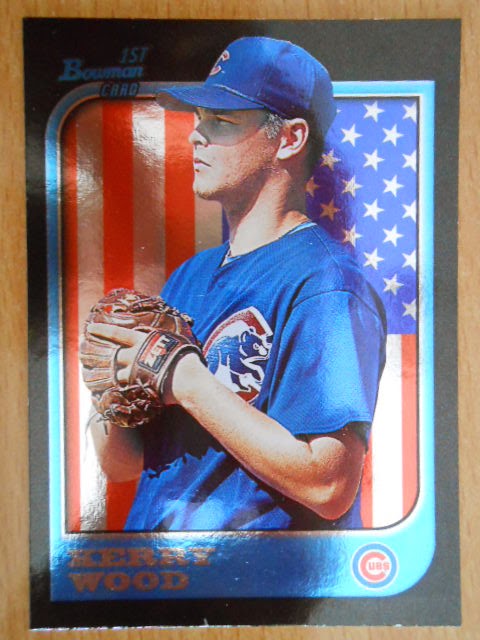 This Kerry Wood card is number 387 in my ever growing collection.  I may reach 400 yet!

I already own a copy of this card, but it wasn't on my checklist . . . and that really bothers me.  I wonder how many other cards have snuck through my system. 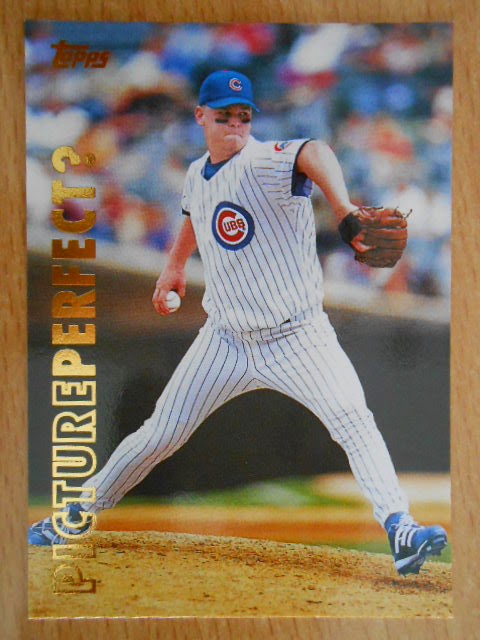 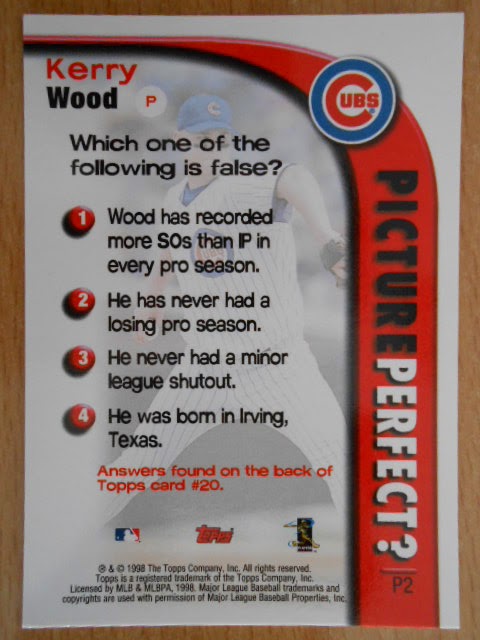 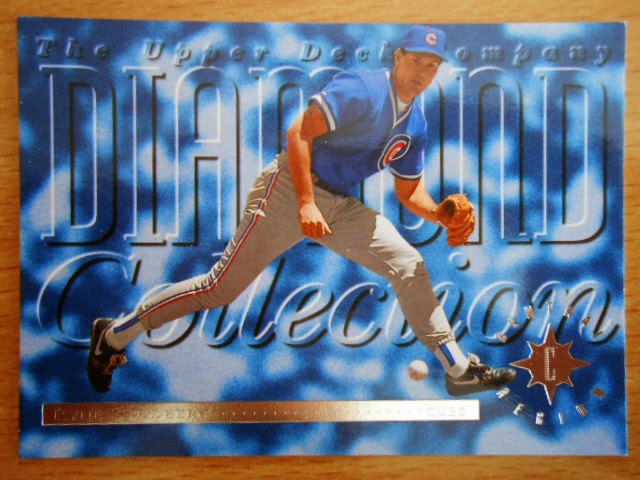 Lastly, we have a shiny horizontal Ryno!  The foil is hard to read, but in the lower right-hand corner it mentions the "Central Region".  I'm fairly certain this was an insert in one of Upper Deck's sets, but outside of that I don't know.  No matter, it's number 758 in my collection.  It's beautiful and makes great use of the horizontal layout.  I can only find one flaw with this card: faux stirrups.  I can't believe Ryne Sandberg would wear such things.  Ugh.

Thanks for the cards T.J.!  I've got some Mariners set aside for you, and a couple of Griffeys I think you're really going to like!  They'll be out to you shortly!