I've kind of talked myself into picking up at least one autographed card or relic card of every member of the 2016 Cubs.  I don't really have any rules, but ideally I'd like all the cards to have the players wearing Cubs garb, but I'll take what I can get. 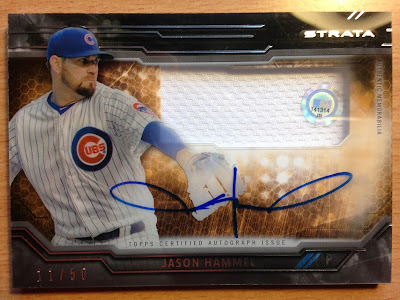 I like the little MLB Authentication sticker on the jersey swatch of this Jason Hammel card. I went to MLB's Authentication page and typed in the information on the sticker. I found this particular jersey swatch came from a 5-4 win over the Giants on August 6th of 2015. Hammel couldn't finish the fifth inning so he wasn't credited with the win, but it was a game the Cubs won!  It's nice to know the relic is actually from a jersey Hammel wore at some point. 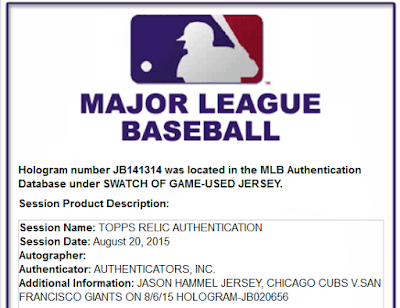 I picked up the above 2015 Strata card of Jason Hammel the other day and it goes down as my first and only card purchase so far in 2017.  White jersey, auto, and numbered 11/50 for under ten bucks. That's a win in my book!