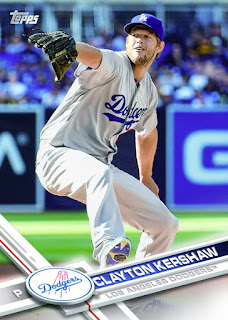 I haven't had anything to do with Topps flagship product since 2011. Back then I enjoyed the design and the diamond giveaway promotion, which resulted in me building Series 1, Series 2 and Update from packs.

Since then the designs haven't really drawn me in. There was the surfboard design and that was followed by the sea turtle design. The file folder design of 2014 wasn't too bad, but I never pulled the trigger. I give Topps points for moving away from the white borders in 2015, but in my eyes it was a hot mess. The full bleed route was an interesting choice in 2016, but I was not a fan of the smokey corners.

The cards I've seen for the 2017 edition have intrigued me. Maybe I'll open my wallet and by a buy a box or two?

I always like to do a little research before I go all in on something, so when Topps released their checklist for Series 1 I took a long gander at the names.

Apparently I wasn't the only one who had done so: 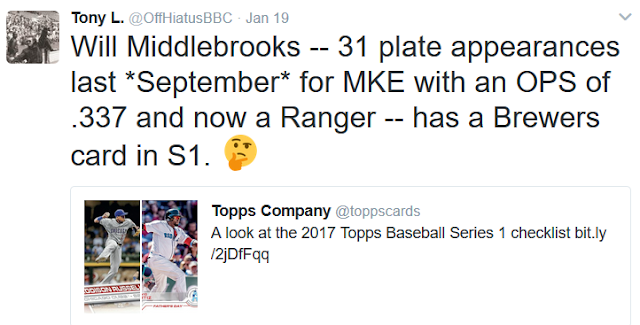 Tony and Topps haven't always seen eye-to-eye and I can't say that I blame him. The Brewers have recently been grossly underrepresented in most (if not all) Topps releases. Of the 350 cards in Series 1 the Brew Crew received 11, which is just about right. So, good on Topps.

But why Will Middlebrooks? As Tony mentions in his Tweet, it's not like Middlebrooks was a main cog on the twenty-five man roster in 2016 for Milwaukee, his third team in the last three seasons. The man played in 10 games during the entire season, while only seeing action in the field at third base. Yet Topps' decision makers obviously felt he was more deserving than Hernan Perez who played 60 games at third and has five more years of control for the Brewers.

Checking MLB.com's depth charts I find Travis Shaw is currently at the top of the third base position for the Brewers. Neither Shaw nor Perez is in Series 1, but instead we get Middlebrooks. I can't assume Topps is trying to go all 2002 Topps Total on us and include everyone who made the 40 man roster. So it must be a timing thing, right?

So, let's examine the timing of it all.

Will Middlebrooks, pictured as a Brewer on his 2017 card, was granted free agency on October 3rd and then signed with the Rangers on November 11th.  There has been plenty of MLB transactions since October 3rd and many involving players who were also awarded cards in Series 1.

I can't really fault Topps here... in most cases. I can't expect them to predict the volatility of the trade market. Some may argue that the writing was on the wall, as in Jorge Soler's or Chris Sale's case, and they shouldn't have been cards in Series 1. And maybe if there's enough smoke, then Topps holds off on including them in their product until Series 2. The inclusion of a top rookie on the checklist, like Yoan Moncada, is always a good play. Who could have predicted Moncada would be the key piece going back to the White Sox in the Sale trade?

Let's dissect the Series 1 checklist a further. Below is a list of players in the set and the team they represent is in parentheses.

Middlebooks asked for his walking papers on October 3rd, a month before the free agent filing date, because he didn't see a future in Milwaukee. Rather than going through the arbitration process with the injured Tyson Ross the Padres non-tendered him. One could argue it would be tough to predict if Middlebrooks and Ross would indeed become free agents. Although, anyone with internet access and a modicum of effort could unveil who was scheduled to become a free agent after the 2016 season.

(For the record, the lists above are not comprehensive.)

Here's where it gets interesting: Chris Carter (Astros), Mark Trumbo (Orioles) and Edwin Encarnacion (Blue Jays). Each of these three players were to be free agents at the end of the season and were not issued a regular card, but instead were given a League Leaders card. This makes me believe Topps wants to steer clear of players who may sign with different teams during the off season, but instead are forced by their own rules to feature them on a League Leaders card.  No?

Yet, by looking at the free agent names listed above, I don't think there's any rhyme or reason as to who's included on the checklist.

When does Topps decide their Series 1 checklist? You would think they wouldn't purposely place a player with their former team within the set. If that's true, then I think it is safe to assume they finalized their checklist before November 3rd, because Cameron Maybin was traded on November 3rd to the Angels from the Tigers, as the first action of the off season. Maybin is shown as a Tiger on his 2017 card and if Topps knew of this trade they would have photoshopped the card or replaced him on the checklist altogether, right?

The finalization date must be after September 15th, because that's the day the Yankees signed Billy Butler to a contract, and Butler has been given a card as a Yankee in Series 1. Doing some quick math and that's about a six week window between the Butler and Maybin transactions.

One may argue Topps needs to start printing on November 4th to be ready for a release on February 1st. Huh?  That's nearly three months! Any idea how long it took me to get the Cubs World Series box set? I received mine forty-one days after the last out was recorded. Obviously, the print runs for the World Series box set and 2017 Series 1 are completely different and more time would be needed. But if Topps started printing Series 1 on November 4th, then that would be eighty-eight days until the release date. That number seems way too large of a number to me.

Things aren't adding up. When does Topps finalize their checklist? How long does it take to print, package, and ship the cards to retail stores? Is Topps really making an effort to give collectors the best product possible? (e.g. - players in Series 1 are featured with their current team for the release date) Why are upcoming free agents given cards in Series 1 at all when they could be represented in Series 2 with their new team?

Questions. So many questions. I do have one answer though.

Will I be purchasing any packs of Topps Series 1 this year? Nope, and it's out of fear that the first pack I buy will contain only players representing a team for who they no longer play.