Ben Zobist Night at the Rivermen

The Peoria Rivermen, a member of the Southern Professional Hockey League, honored Ben Zobrist this past Saturday night. For thirty dollars fans would get a ticket to the game, a food and drink voucher, and get to quickly meet Ben Zobrist and obtain an autograph. I hadn't been to a Rivermen game in the last decade, but this promotion got me through the door, along with 8,300+ other fans for their biggest crowd of the season.

Here's a picture of Ben signing autographs at his table just off the concourse. 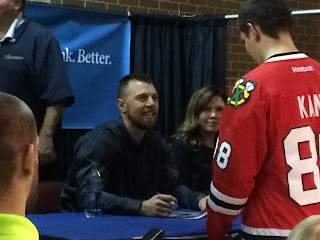 As always, he was approachable, humble and kind.  He shook my hand and thanked me for coming out. I thanked him for coming to Chicago and making a lot of Cubs fans really happy. 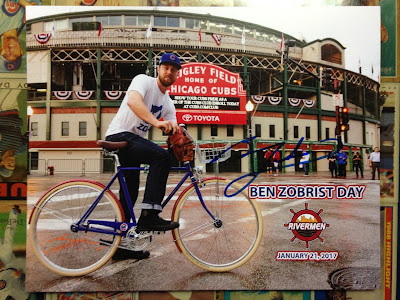 He autographed the same 8" by 10" photo for everyone. After we bough the tickets to the game we learned that he would only be signing an 8" by 10" for everyone and I bummed because I wanted to get this card signed: 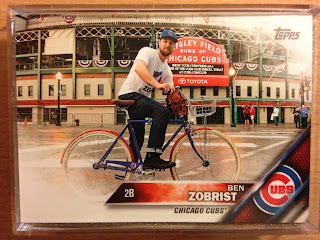 Yeah, I guess that seemed to work okay! LOL

Ben had many autographs to sign. I believe the number was 6,000, so I think he enjoyed giving his hand a rest in the middle to walk out onto the ice. 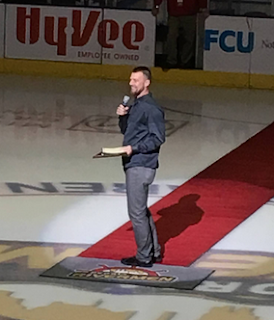 He was introduced by a city councilman and given a key to the city. Once the teams were introduced and the other preliminaries were held he then donned a Rivermen jersey and dropped the first puck. 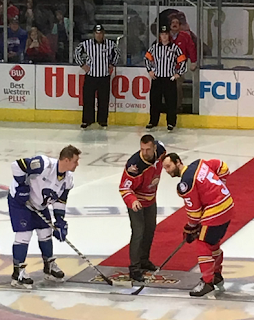 Afterward Ben returned to the concourse to sign more autographs and we were entertained by some good ole minor league hockey. 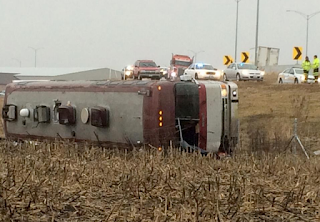 The Rivermen scored the first goal, but the Columbus Cottonmouths stormed back with four of their own. The crowd was pretty shocked, because just two days before the Cottonmouths bus turned over on the highway on its way to Peoria and the last place team was without much of its top talent.

The Rivermen fought back and eventually tied the game and won in overtime. Three-on-three hockey is fun to watch!

I also had fun watching one of my former students on the ice. 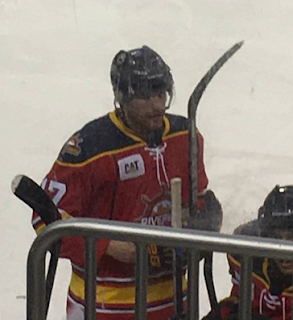 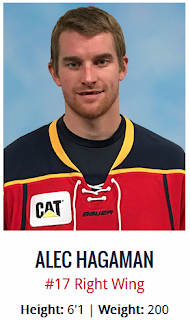 Alec was one of my freshmen baseball players back in the day. I also had him in my Algebra 1 class for a year. I thought he was going to be one of the top baseball talents in the area by the time he was a senior, but he chose hockey instead. It seems to be working out for him!

It was a fun night with my sister and my good friend, Jim!