It's time for a shameless plug for my 4-box group break which will then seamlessly transition into another edition of Pack Wars!  Sign ups are still going on: cards of your favorite team from four boxes for four bucks.  I've busted the '89 and '90 Swell boxes and pulled enough cards for complete sets from both, which means guaranteed teams sets.  Woo-Hoo! 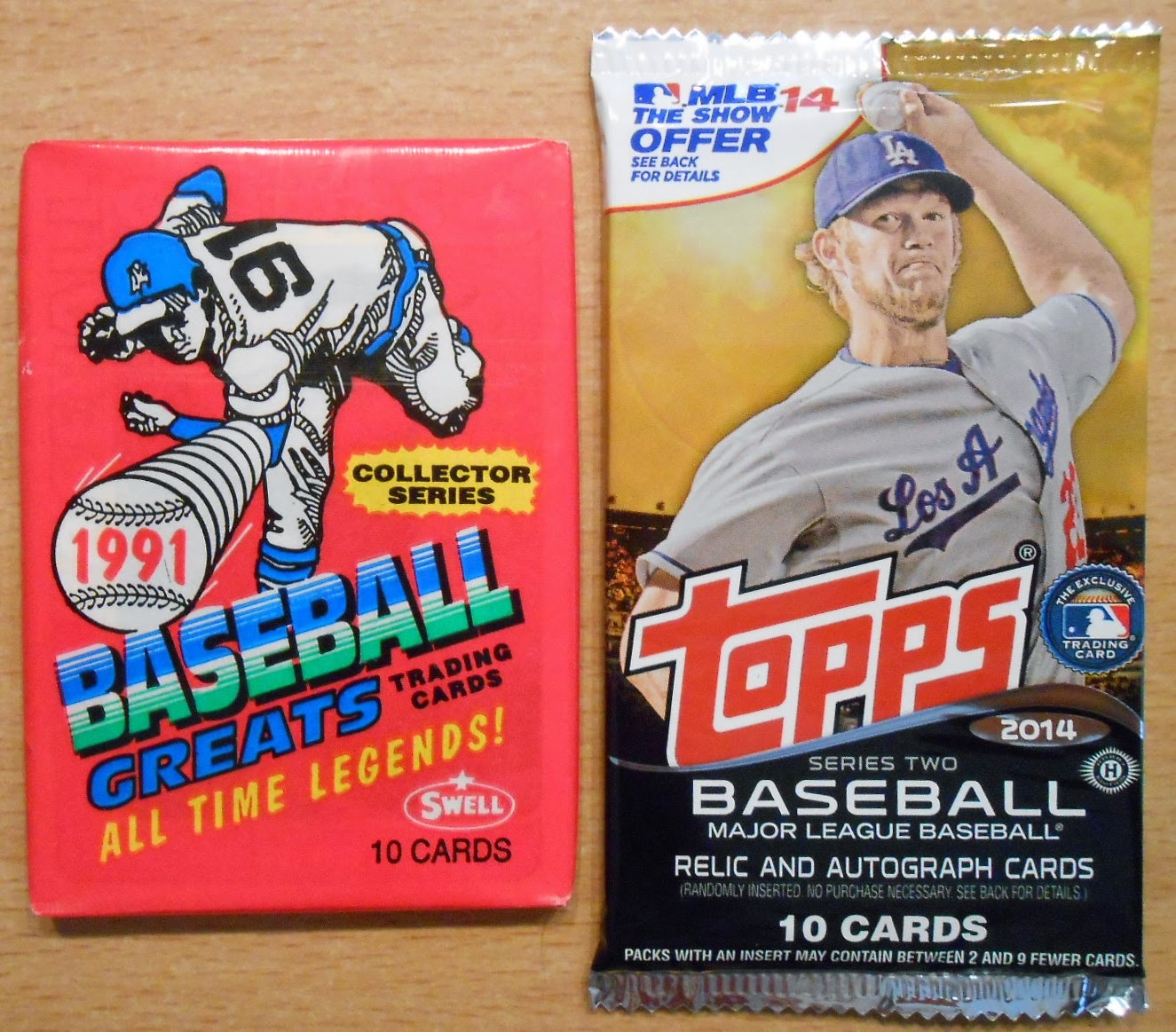 I'm in the process of breaking and sorting the '91 Swell box, but I thought it might be fun to pit a pack of '91 Swell Baseball Greats against 2014 Topps Series 2. 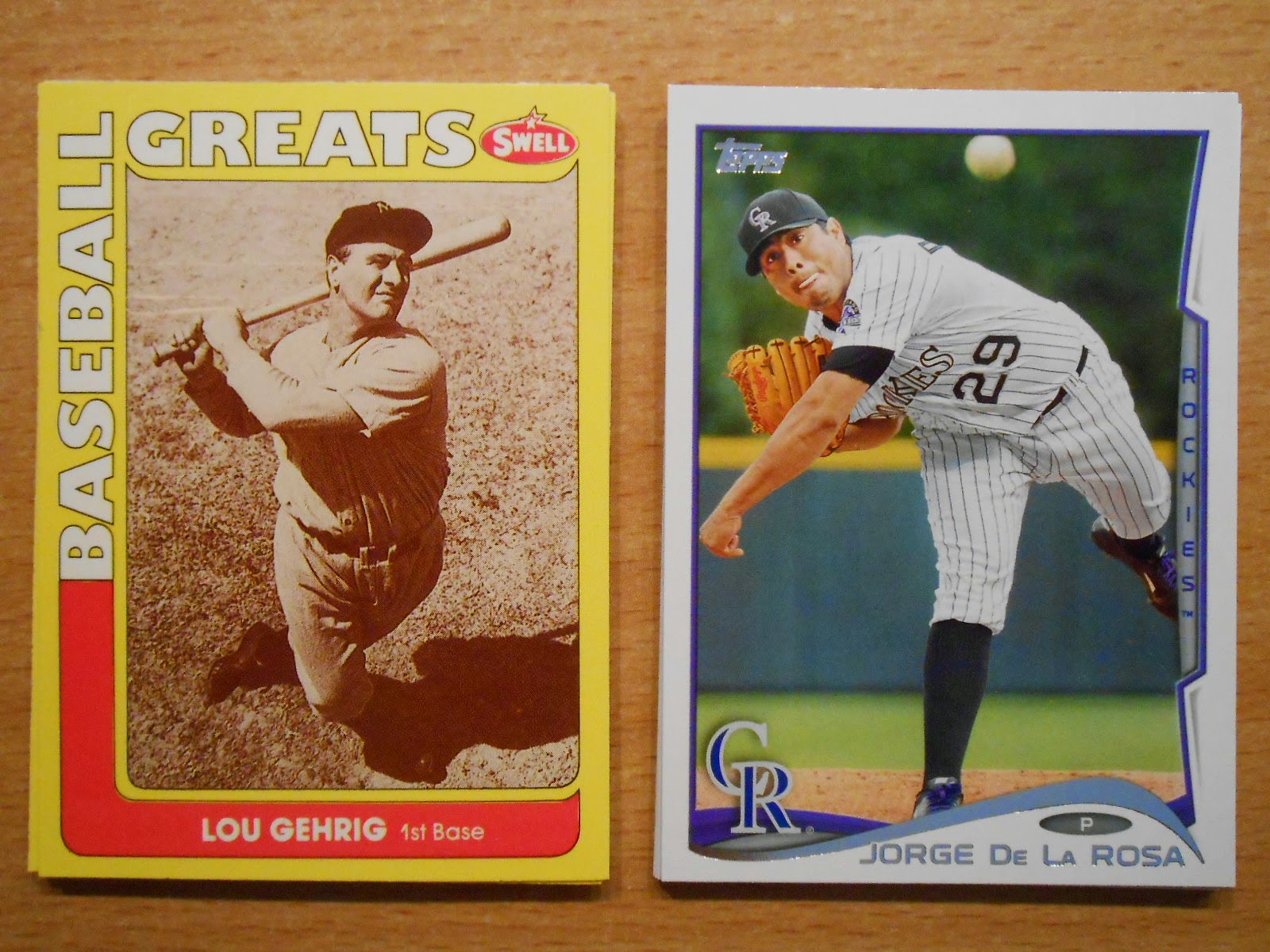 Wow, Swell comes out of the gates swinging for the fences with arguably one of the best players of all time.  The De La Rosa is a nice card, but in my eyes this is about as lopsided as a match-up you'll find.
'91 Swell = 1
'14 Topps S2 = 0 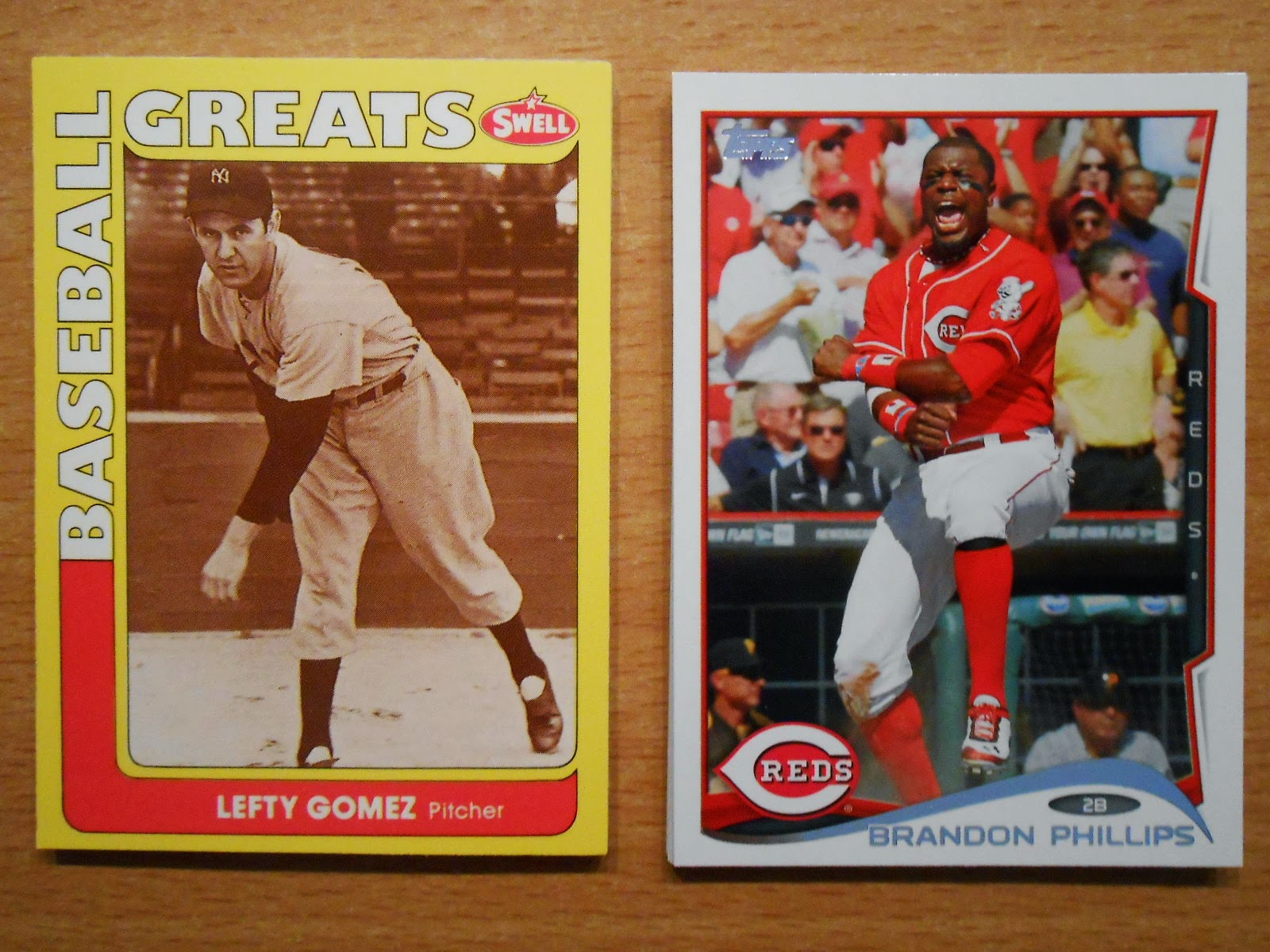 Lefty Gomez was a fantastic pitcher, but I love the emotion captured on Brandon Phillips card.  Did you see BP gave a ball to a heckler with a message on it the other night?  Simply. Classic.  Topps evens the score.
'91 Swell = 1
'14 Topps S2 = 1 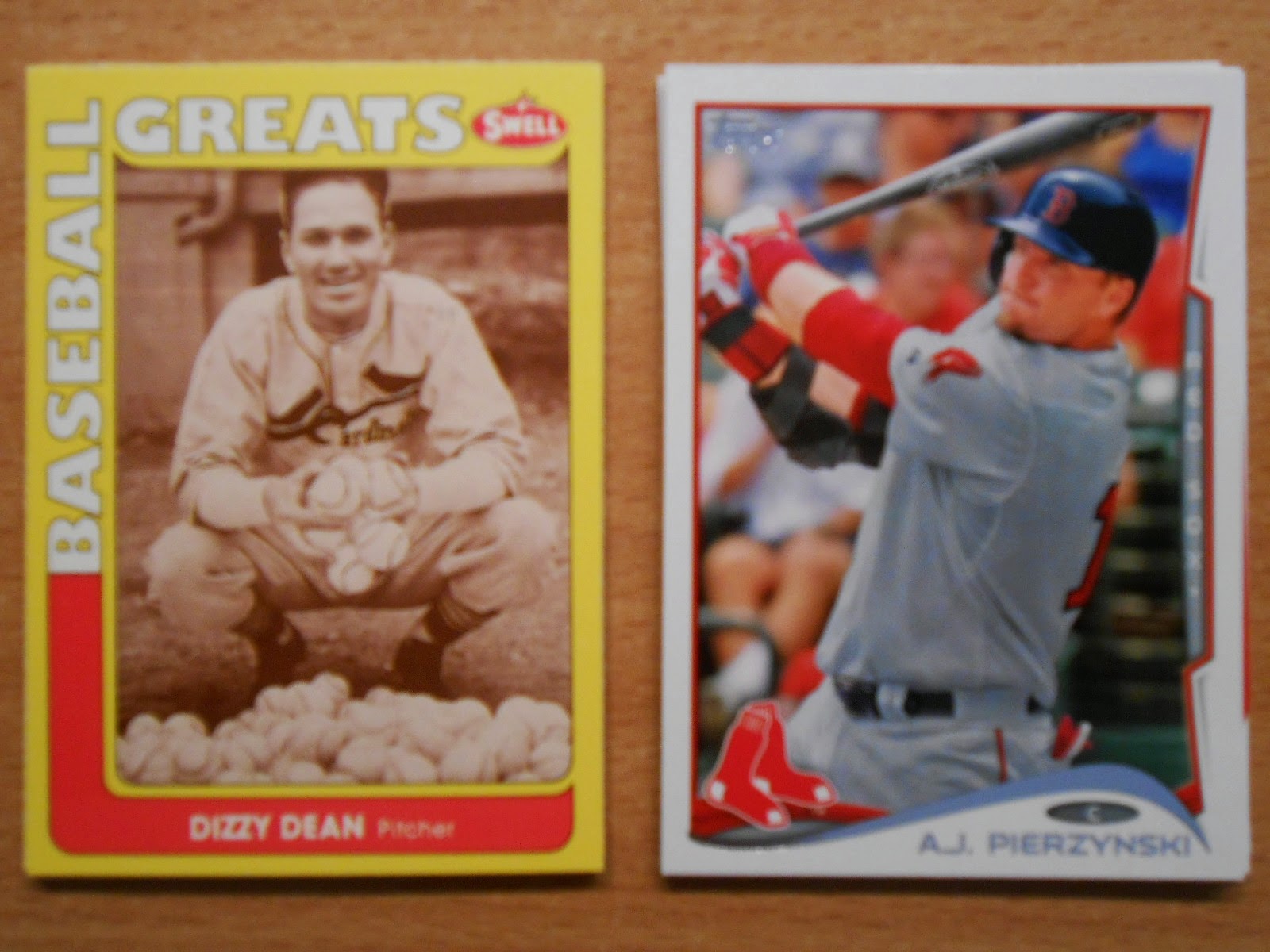 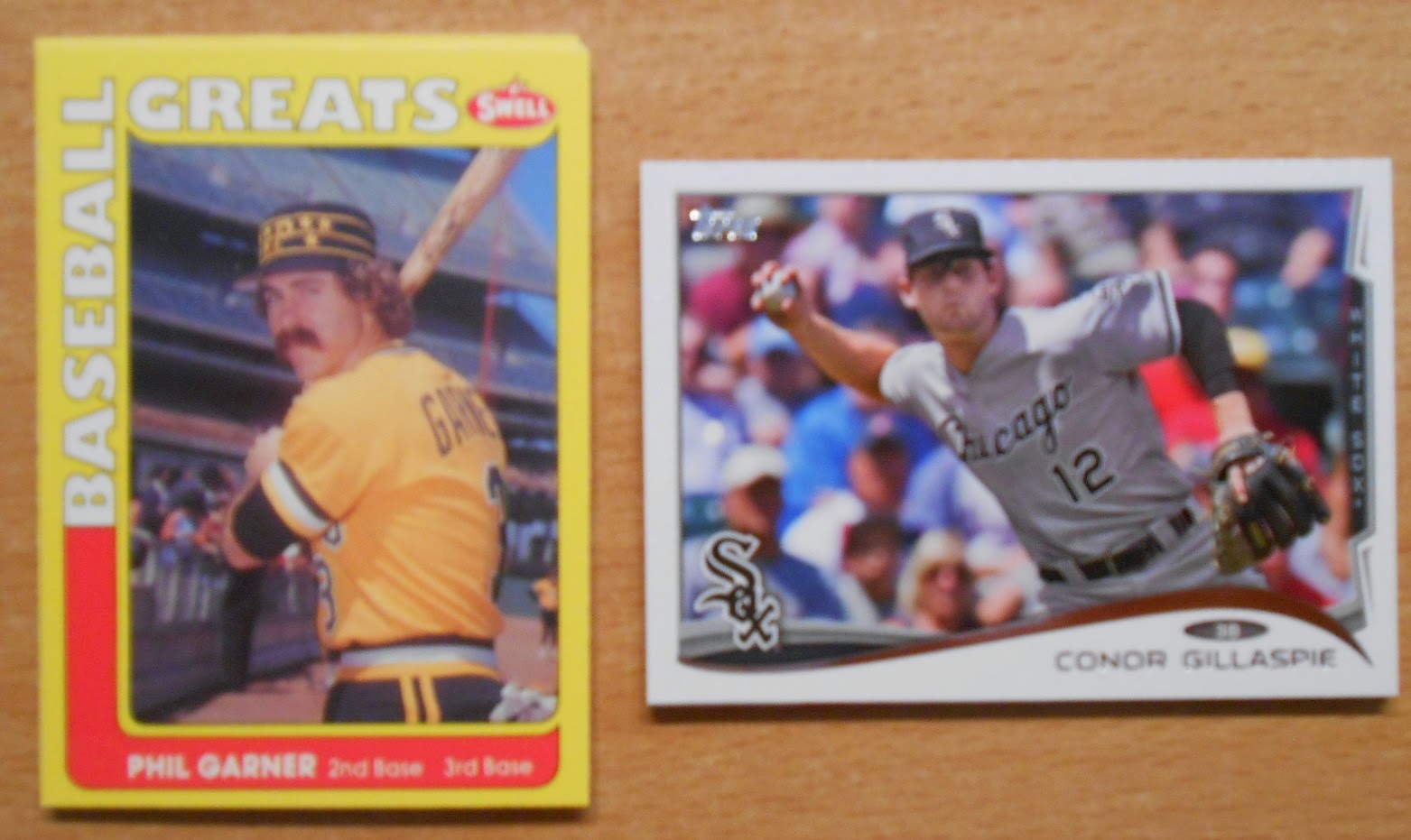 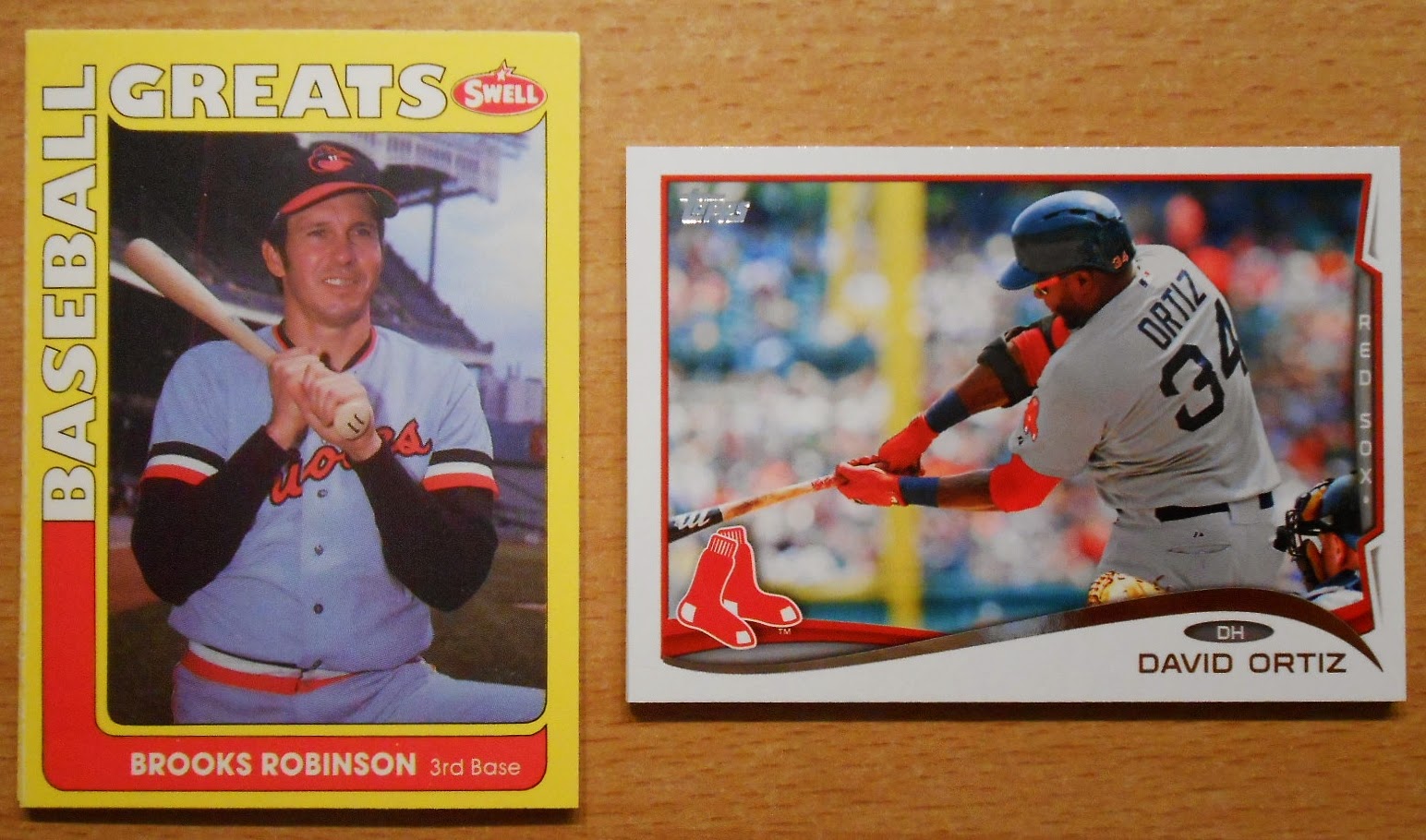 I really liked the cropping on the Conor Gillaspie card above, but I think Topps went in too close on this one.  I want to see where the ball is located!  Contact?  Swing-and-a-miss?  Brooks Robinson might be the finest fielding third baseman of all time, but the posed shots from Swell are making me yawn.  The point goes to Topps.
'91 Swell = 3
'14 Topps S2 =2 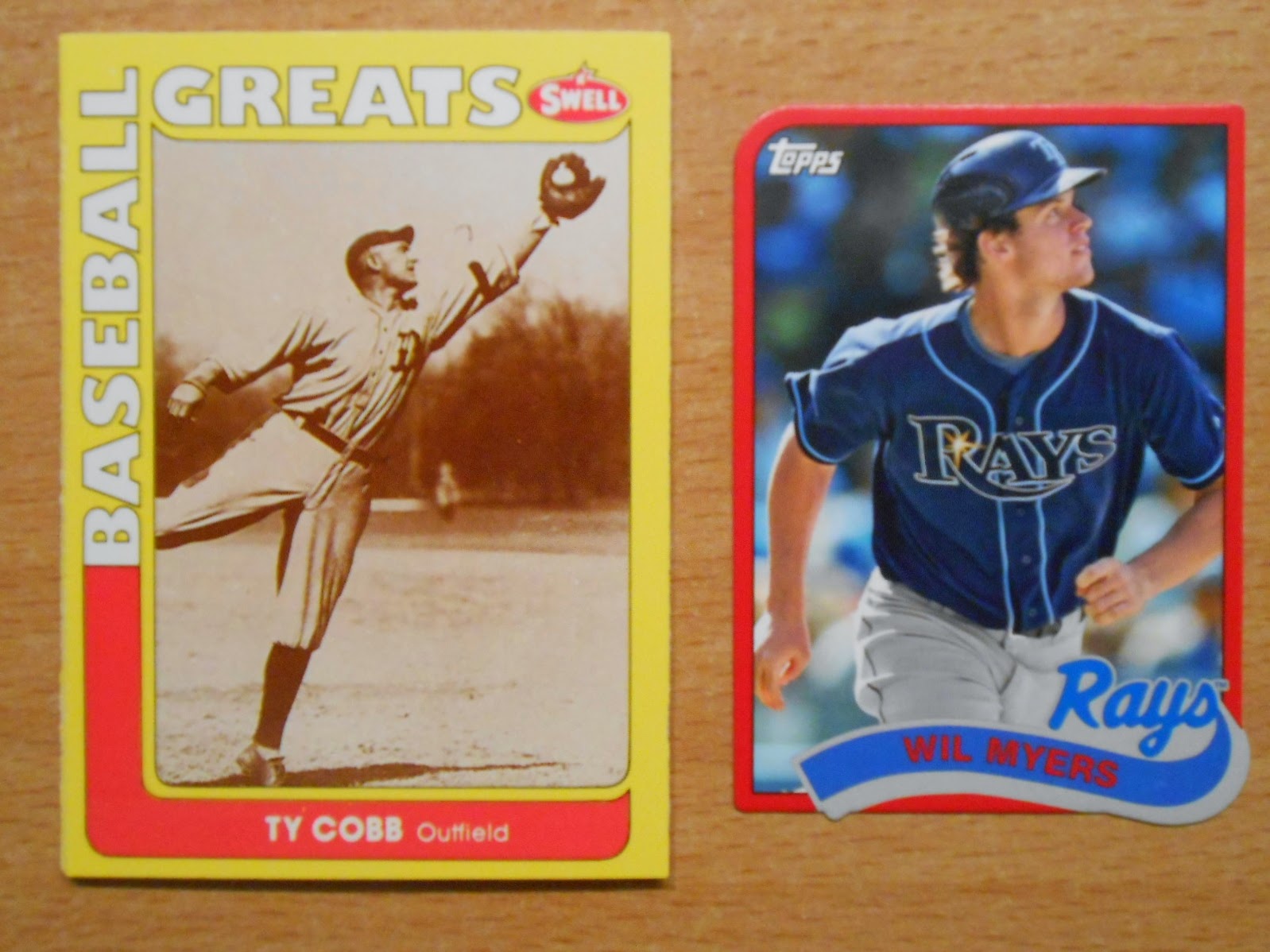 Ty Cobb versus a mini?  Wow, what a heavyweight match-up! Wil Myers is really struggling this year after capturing the Rookie of the Year award last year.  Plus, I don't think I know of any Rays bloggers to trade with.  Bummer.  Upon further review, this point goes to Swell.
'91 Swell = 4
'14 Topps S2 = 2 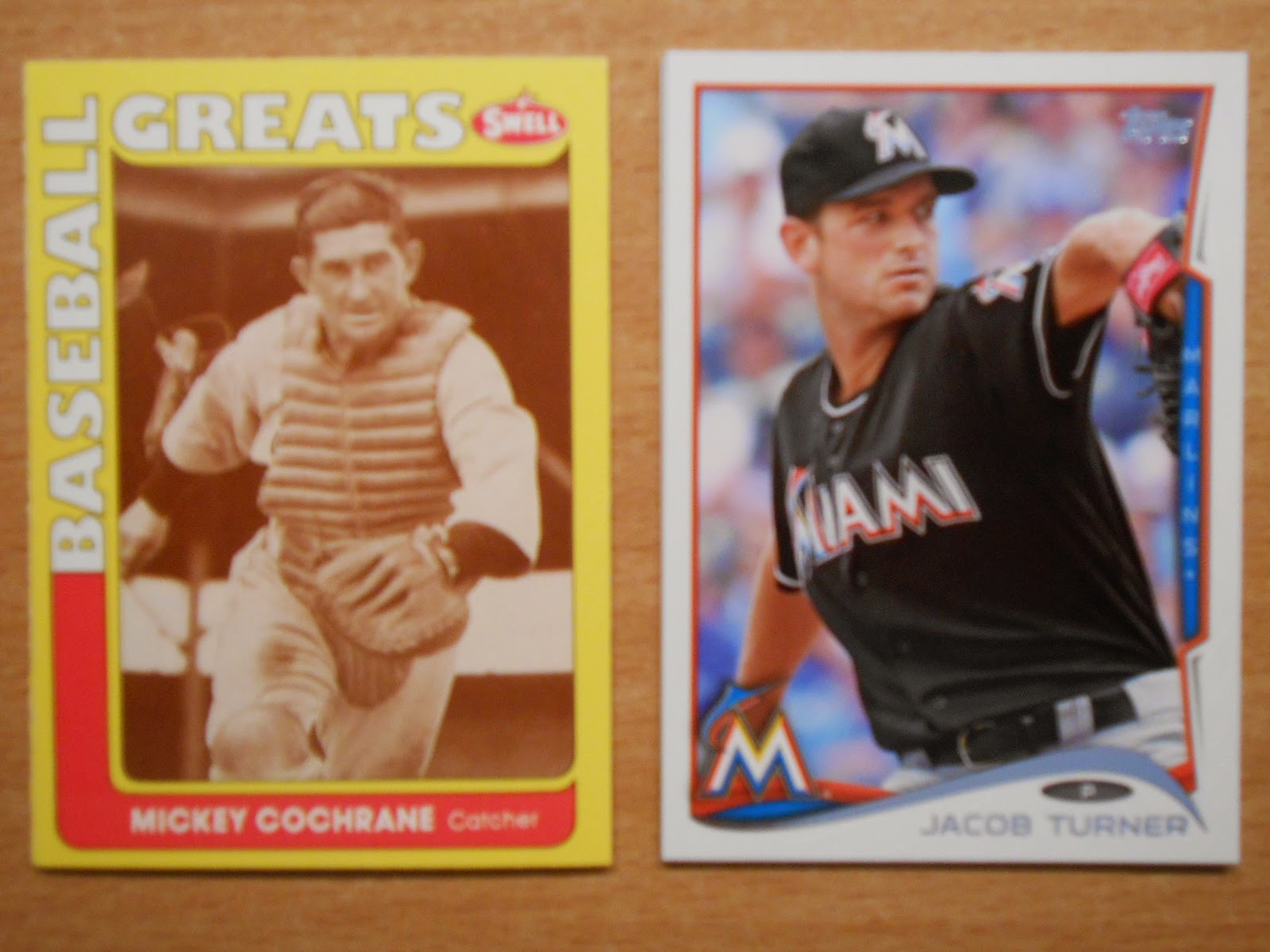 I apologize for the blurriness of some of these photos.  Swell finally used an action shot in the pack!  Jacob Turner?  Meh.  Again, I don't have a trading partner I can send the Marlin to.
'91 Swell = 5
'14 Topps S2 = 2 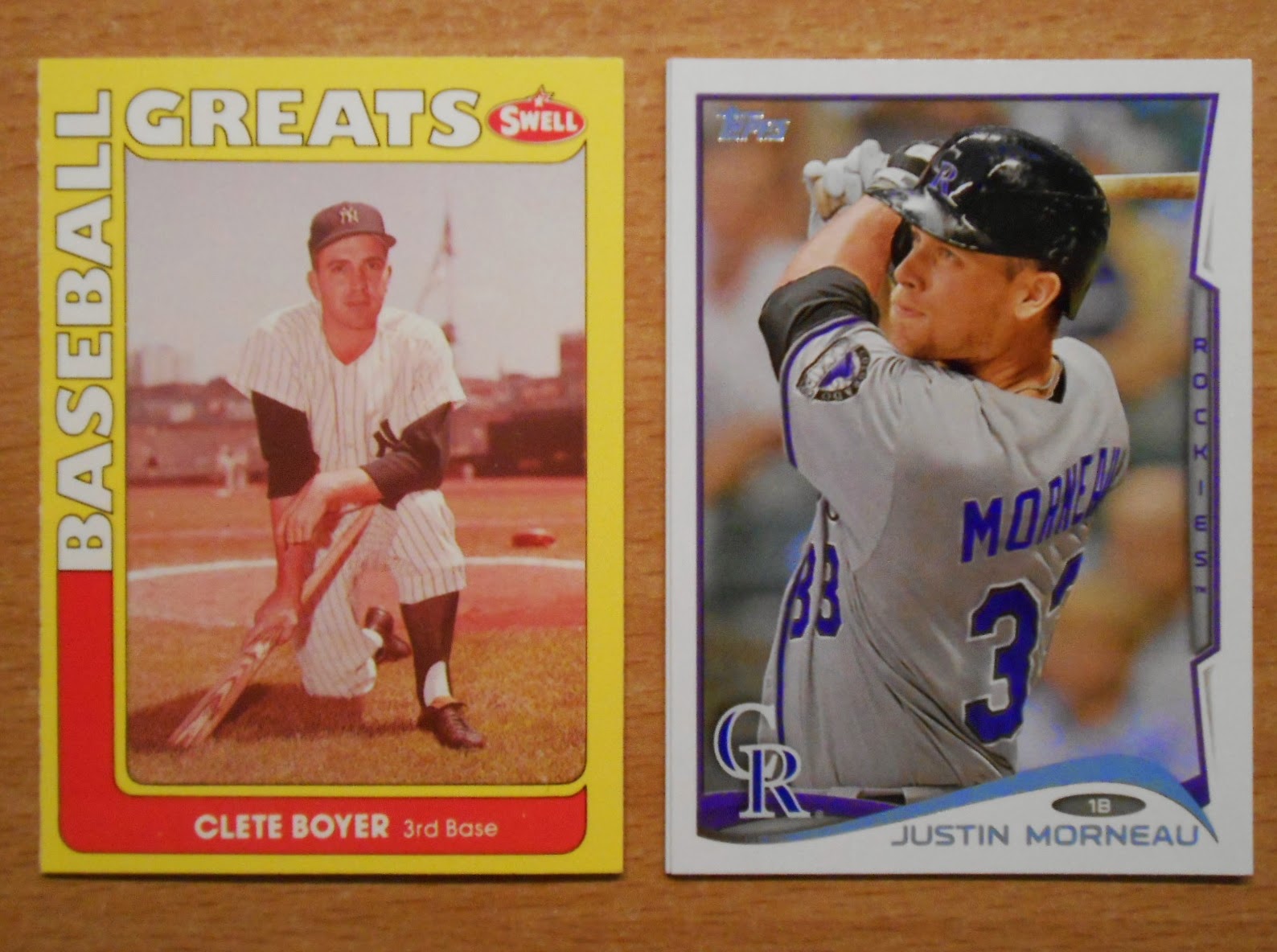 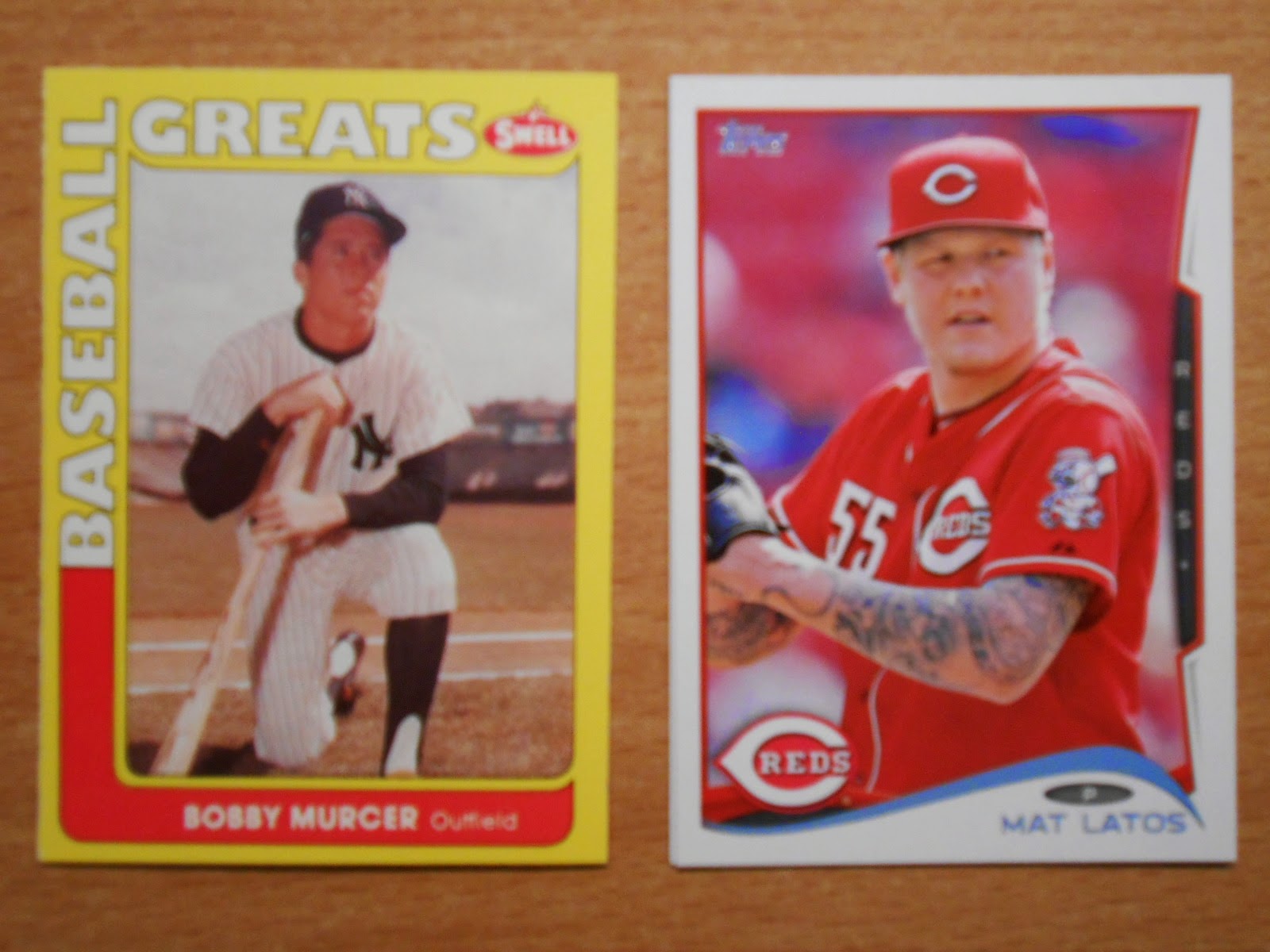 Bobby Murcer gives me my fourth Yankee in the pack, which by my count is at least three too many.  To tip the scales even further Mat Latos is so bad-a$$ he only needs one "t" to spell his first name.
'91 Swell = 5
'14 Topps S2 =4 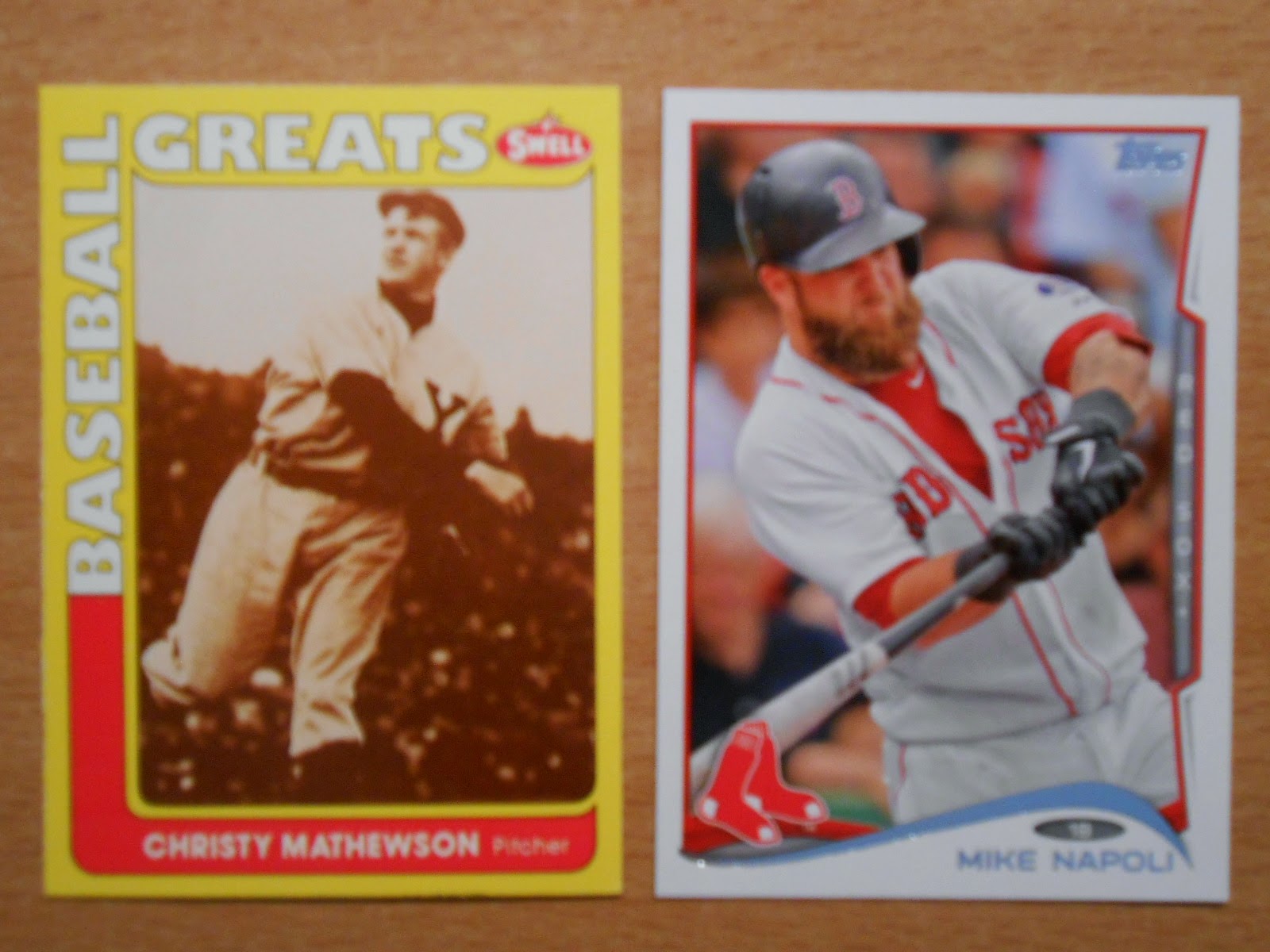 There we have it.  '91 Swell plays Topps to a draw, but we could have had a different outcome if I had drawn a better player than Wil Myers for the insert.  So it goes!

Thanks for stopping by for another edition of Pack Wars.  Don't forget to sign up for my box break!