I was on the fence as to what to set to build this year: Archives or Bowman.  Then Nachos Grande offered up a three-box team group break and I was able to snag the Cubs.  Score!  Well, the group break will allow me to cross Topps Archives off my list.  In my collecting world it makes little to no sense to build a set when you already have all of the Chicago Cubs.

I've never collected a Bowman set before, but I have dabbled a bit with Bowman and its parallels before.
Exhibit A: My Dillon Maples rainbow.

This all got me to thinking about one of my favorite bloggers: The Cardboard Junkie.  He's a very witty blogger who introduced me to the FrankenSet, "Think of it as a set built like Frankenstein's monster out of many different parts."

So I went to my LCS and purchased a jumbo pack and hobby pack to get started.  Here's some of the variety that I can expect, including the gold parallels:
Bowman prospects, and my first two Cubs cards!  Gioskar Amaya (left) is playing for Low A Kane County and Christian Villanueva is in AA manning the hot corner. For what it's worth, Villanueva came over from Texas in the Dempster deal. 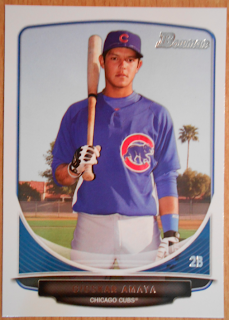 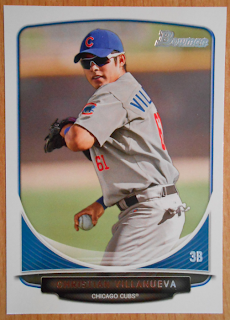 Ice parallels!  Man, I do love cards that shine and sparkle!

International and State parallel cards that feature the flag of the nation/state the player originated from.  I just so happened to pull Yonder Alonso's base card in one pack and his Cuban flag parallel in the other.  Cool.  Obviously, the parallel flag card will go into my FrankenSet. 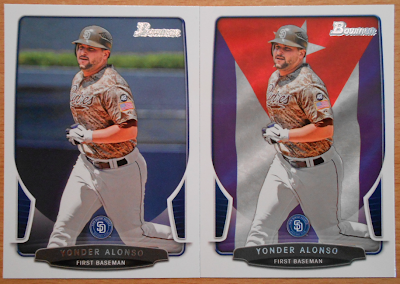 I was lucky enough to pull a chrome auto of Taijuan Walker out of my jumbo pack.  This one will go into a top loader, not my set, but it's always fun to pull an autographed card! 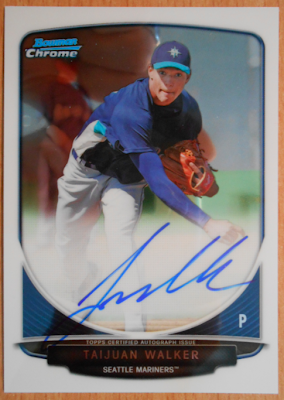 This should be a fun little project to keep me busy over the summer!