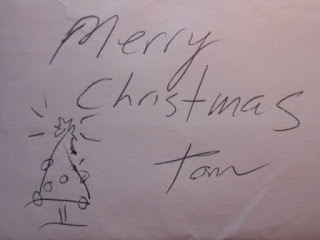 I received a XMas PWE from Stealing Home in yesterday's mail.  I love me some holiday cheer and cardboard.  What a great combination! 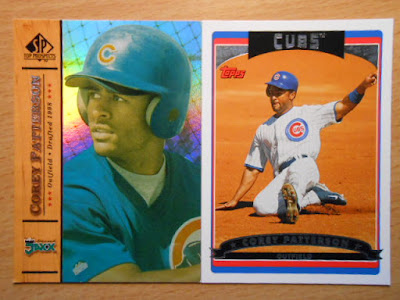 Oh, I remember those days when the Cub fans' hopes and dreams were attached to just one prospect.  Patterson never did quite match the hype, which seemed to be the rule for Cubs prospects during the last couple of decades.  Then Theo and Jed took over and our line-up is full of prospects striving to match the pundits predictions: Bryant, Soler, Schwarber, and Russell.  Oh my! 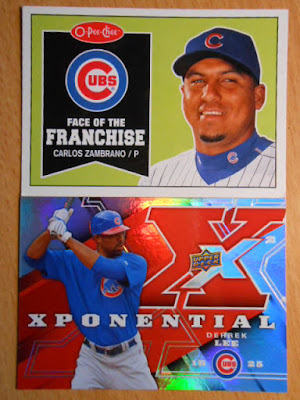 Big Z and DLee were two of the mainstays from the most recent successful Cubs teams. As a math teacher, the Xponential card really speaks to me.  It'll be tough to keep that one out of the Cubs FrankenSet.  Added bonus: it's shiny! 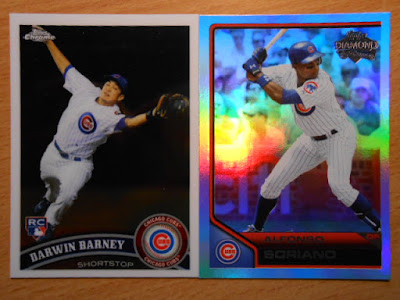 Darwin just signed on with the Jays and will probably make the Opening Day roster for Toronto due to one of their other middle infielders being on shelf due to injury until May or so.  I have the base Lineage card of Soriano in the FrankenSet, but it will soon be replaced by this Diamond parallel.  Very nice! 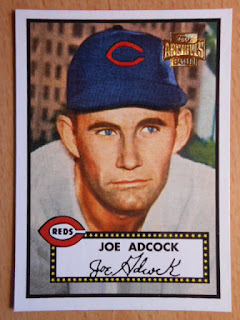 Adcock played for four different franchises, but he never played on the Northside of Chicago.  It's a pretty nice card from a set I don't have much of.  I think Oscar may have mistaken the red C on the Adcock's hat for a Cubs C. I'm sure I have a few Reds in my Cubs boxes for that very reason! 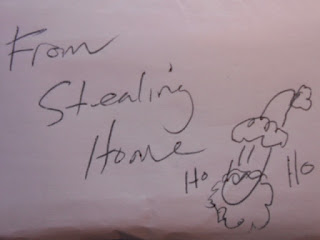