Matt, from Bob Walk the Plank, hit me up with some unlicensed Merry Xmas wishes. For the record, these arrived a week ago, which was well before the 25th, but I do my best spread out my posts and I try to go in order from when then hit the mailbox. 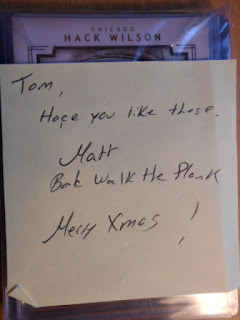 I never dabble in the high end market.  Never.  Don't get me wrong, I'll window shop on Ebay, but I can't bring myself to even purchase cheap singles of Cubs.  Maybe it's a mental thing from being raised in the Junk Wax Era, when a wax pack could net you fifteen cards for fifty cents.

Maybe I should learn to expand my horizons a bit? I love everything about these cards, all the way down to the photo selection so that Panini doesn't have to hide the fact it doesn't have a license. 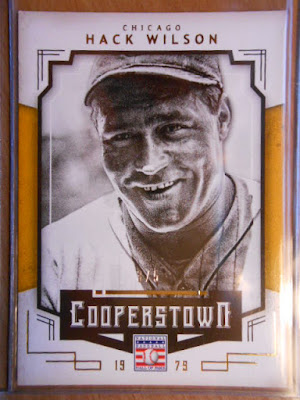 They sport a clean a design and the black and white photos really do it for me.

I've been toying around with creating a Hall of Fame binder and maybe these will get me started.  I've been thinking about this binder when I'm out jogging for exercise, and after a few runs I've decided that I would like to sort the pages by the year the players were inducted into The Hall. So, I really like how that's visible at the bottom of the card. 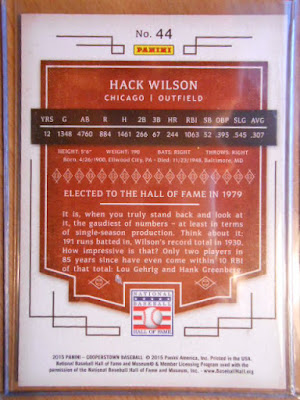 Did you notice the different colors between the two cards?  The Hack Wilson (above) is the gold parallel and is serial numbered 3 out of 5, and the Gabby Hartnett (below) is the green foil parallel and is numbered 1 out of 10.  Low numbers FTW! 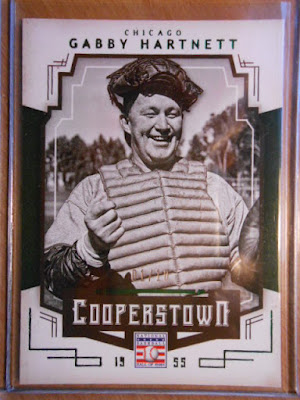 The backs feature career stats, the player's vitals, and a nice little write-up.  Simple, sweet, and to the point.  Well done, Panini.  2015 Panini Cooperstown gets an 'A' in my book! 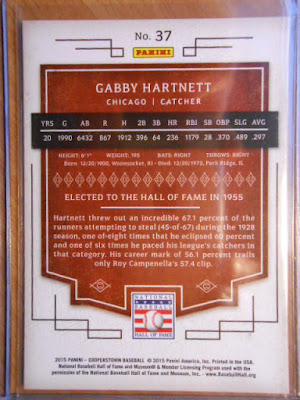 The last card in the bubble mailer is from Panini Immaculate, which is another uber-high-end set. For the record, Copperstown boxes commonly go for over $100 and have twelve cards per box.  Meanwhile, the Immaculate set is even pricier at six cards for roughly $200.  Waaaaaay out of my league. 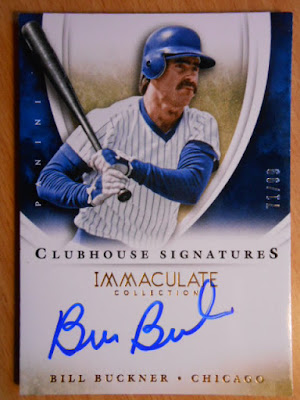 Somehow Matt wound up with these in his possession and I'm the lucky beneficiary. The Bill Buckner is an on-card autograph and is numbered 71/99.  It is also a very thick card and is quite striking.  Another strong effort by Panini.