Completing a couple of sets was my main reason for visiting Sportlots.com, adding a few Cubs was just a perk.

Shawon Dunston was one of my favorites when I was growing up.  He exhibited so much hustle on the field and his arm at shortstop was truly second to none.

Here's a nice 2005 Topps Archives card of Shawon done in the style of the 1990 flagship. 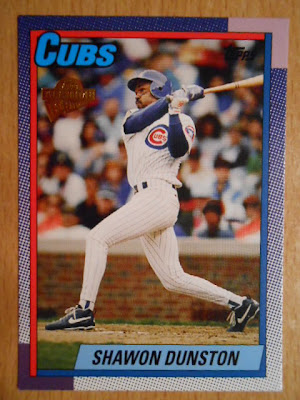 I needed a different card of Welington Castillo.  I mean, hey, he's supposedly going to be the starting catcher for the team next spring.  I had a few 2011 Topps Update cards of his, but I was hoping for something else.  A 2008 Bowman card that features his '07 season with the Peoria Chiefs was a nice find for $0.18. Score! 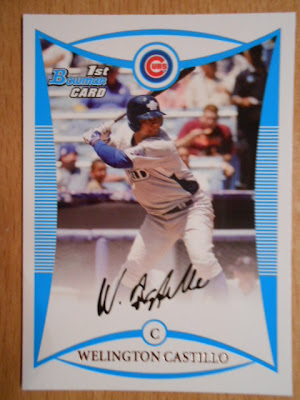 Many collectors have a tendency to pull the same player from packs, and often times they don't like the player or they play for a rival team.  Back in the 1990's I could pull a Juan Gonzalez card without even trying.  At least he was a pretty decent player.
My luck has changed.  I actually frequently pull cards of a player from my team!  What's the odds?  So, I am now unofficially collecting Starlin Castro. So, to help the unofficial player collection along I added a few cards. 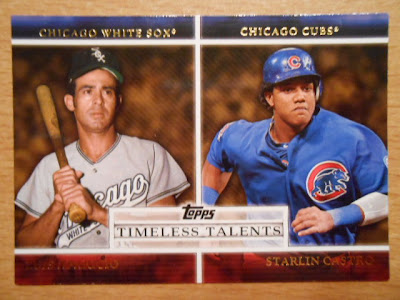 2012 Topps Timeless Talents card with Luis Aparicio.  Apparently Starlin's game is comparative to Aparicio's because they are "rangy shortstops with game-changing speed".  Um, first, Castro's career average is 40 points higher than Luis'.  And secondly, Aparicio led the league in steals nine straight seasons.  Castro can steal a base, but not like that.  Nice try, Topps, but I don't see it. 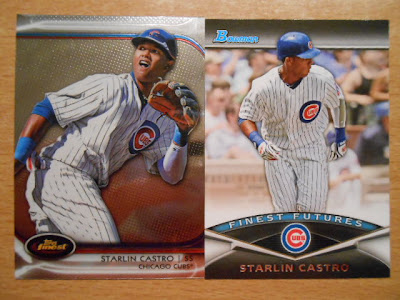 Plus I added some of the new Cub acquisitions.

Meet one of the newest additions to the starting rotation: Scott Baker. 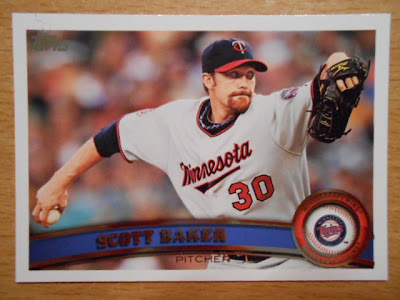 Brian Bogusevic will battle Tony Campana for a roster spot: 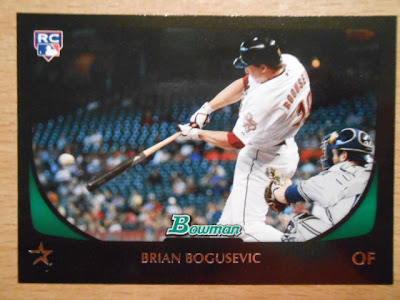 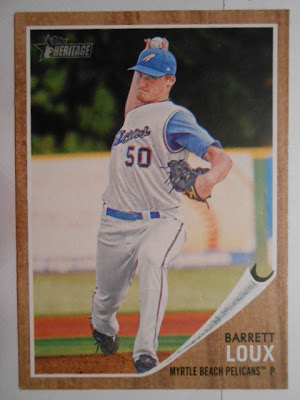 Loux is my new favorite minor league player to follow.  He was compensation from the Rangers for Geovany Soto.  The original pitcher we received in the deal turned out to have a bum arm. The Rangers, in good faith, sent us Barrett instead.  Barrett is a former #1 draft pick who earned Southern League Pitcher of the Year honors in 2012.  Nice!

Plus, get this: he doesn't have an ulnar colateral ligament in his pitching elbow.  Basically, that means his previous two organizations gave up on him because he's a bit of an unknown.  I say, great!  The man at least won't have to be subjected to Tommy John surgery because he can't tear a ligament he doesn't have.

Welcome to the Cubs, Barrett!