Play with the Pros

I was kind of bummed last evening.  I had a basketball coaching commitment to fulfill, but I wanted to attend the "Play with the Pros" event, which was being sponsored by the Peoria Christian Center, and was taking place at the Avanti's Dome in Pekin, IL.

The event is designed to be a baseball clinic for youngsters.  The instructors were all professional baseball players who have roots in the Peoria area.  What a great way to give back to the community.
Obviously, with today being my 35th birthday, I'm a little old for the demographic they were hoping to attract, but I would have been happy to sit in the corner and just take it all in.

So last night I'm keeping stats on the iPad during the varsity game with the head coach's daughter.  The game is moving fairly quickly and we're struggling to log all the events as neither of us are terribly famililar with the stat keeping software..  Karl, the normal scorekeeper, and I have a pretty good relationship, and he is a wiz with the iPad.  Yet, Karl was at "Play with the Pros" and would be running late this evening.  Oh, how I envied Karl.  In my book, basketball takes a backseat to baseball every time.

Finally, Karl shows up in the middle of the 3rd quarter and I can finally return to my normal post of narrating the the stats while his fingers fly about the iPad logging everything I say without hesitation.  It's good to have Karl back.  But wait, there's more.

There's a timeout in the action... and what's this?

Karl's brought me a birthday present!  Which, totally brightened up my Friday night!

An autographed baseball from the coaches at the "Play with the Pros" clinic.  Sweet deal!

Brian Shouse, the top autograph, grew up in Effingham, IL, and attended Bradley University. He maintained a 3.72 earned run average during his pro career.

Chad Johnson, the bottom atuograph, played catcher for Galesburg High School last spring and is now in the Royals organization.


Josh Parr, middle autograph, graduated from Illinois Valley Central High School and played the University of Illinois before being drafted by the Diamondbacks.

Zach McAllister, the bottom autograph, is a 2006 graduate of Illinois Valley Central and made his Major League debut for the Cleveland Indians last season. 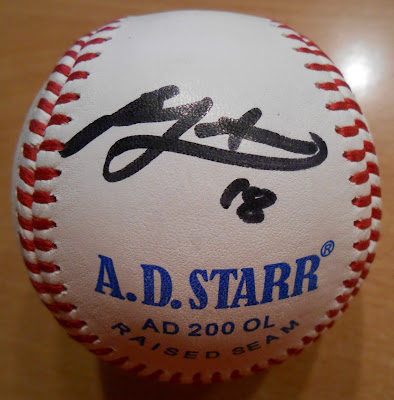 Ben Zobrist is a native of Eureka and has become one of the most versatile players in the league for the Tampa Bay Rays.   I secretly try to draft him for my fantasy leagues each spring.  Shhhh!  Don't tell anyone!

Karl definitely has the hook up.  He's worked with Ben Zobrist in the past and they e-mail from time-to-time.  I wish I had those kind of connections when I was in high school!

Thanks for the great gift, Karl!  It's the next best thing to actually being able to attend the event!