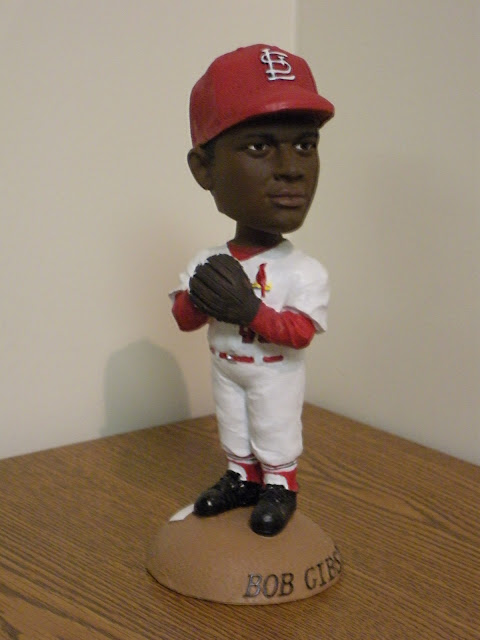 Bobblehead #16
Name: Bob Gibson
Position: Starting Pitcher
Team: St. Louis Cardinals
Description: 7 inches tall; poised to make his next pitch from the top of the mound.
Relevance: I have been to games at the Old Busch Stadium and the newer version.  This ballpark commemorates those visits.  And seriously, being a pitcher fanatic, why wouldn’t I pick Gibson to represent the Cardinals?
How Acquired: Another eBay purchase.
Other Notes: The Cubs have had some solid pitchers take the mound over the years, but who would you pick as the one that stands out?
Mordecai “Three Finger” Brown?  He won 29 games for the 1908 Cubs and he’s a Hall-of-Famer, but he pitched in the “dead ball” era.  Plus the last time he won twenty games was over a century ago.  Someone more recent perhaps?
Greg Maddux?  He won 61 more games and his ERA was nearly a full run lower as a Brave.  I think not.
Ferguson Jenkins?  Hall-of-Famer, best years with the Cubs, and played in this era.  He and Maddux’s are the only pitchers to have their number retired.  He may just be the best representative of the Cubs.

For the Cardinals, it’s an easy decision.
Check out Bob Gibson, specifically that 1968 season.  Wow!  He, more or less, single handedly forced Major League Baseball to lower the pitching mound to give the batters more of a fighting chance.  He didn’t hit a ton of batters, but he knew how to pitch inside effectively and batters just appeared timid in the box.