The Joy of A Completed Set Run

For quite sometime now I've been working on adding each Topps baseball set from the time I was born to when I jumped out of the hobby during my teenage years.

I started collecting cards in 1988, but I didn't finish that set until the summer of 2019. It wasn't that it was that difficult, but I never really took the time to see what I had until decades later. For the record, the first set build I managed to complete was the 1989 Topps set the summer it came out.

Anyway, immediately following the completion of the '88 set I started on the 1982 set, one which I was pretty excited about. Older sets have star names which are not frequently on my radar and other players to learn about. Overall, it's a fun learning experience collecting an older set, but one that was interrupted by Covid. Also, I came to find not many collectors build sets from the early 80's so most card show dealers leave their inventory at home. Womp-womp.

This past summer I thought I tracked down the last cards for the set, but after double checking I found I was missing card #600. Ouch. A double zero card number!  Thankfully, it was an 18 cent purchase from Sportlots, plus shipping of course. The card arrived early last week. 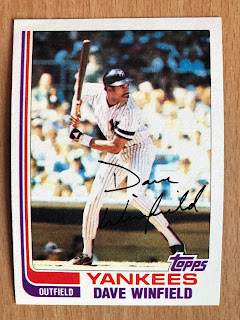 Woo-Hoo! Now I have all the Topps sets from 1978 through 1993 Series 1. It's not the longest consecutive run on the blogosphere, but it's something I'm definitely proud of.