An Auto of Randy Johnson?

I celebrated a birthday a couple of weeks ago with my family and my sister surprised me with a nice little stash of autographed baseball cards.

All of my autographs and relic cards are housed in top loaders within a couple of sizeable "shoeboxes" within my man room. Up first are a couple of infield prospects who didn't pan out. 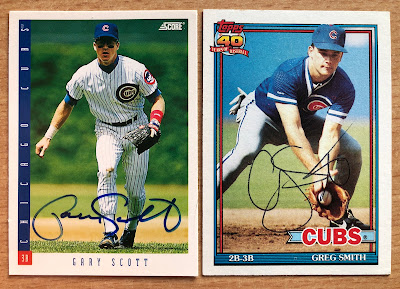 Neither Greg Smith nor Gary Scott had much MLB staying power, but Scott hit 0.366 during Spring Training in 1991 and had all of Chicago dubbing him the next coming of Ron Santo.
This is my second autograph of Turk Wendell, who I have privately nicknamed "Turk the Quirk." 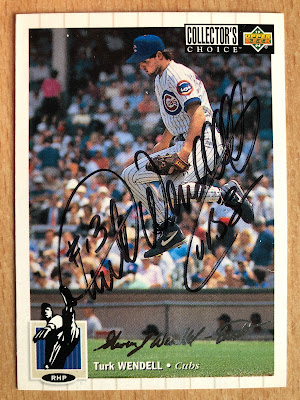 Wendell who turned in a pretty fair major league career was more known for his quirky superstitions when we was first brought up. On my other card, which is also a Cubs card, he inscribed "Mets" under his signature. I'm glad he scribbled in "Cubs" this time around!
Tommy Hottovy did not play for the Cubs, but he is the current pitching coach for my favorite team. 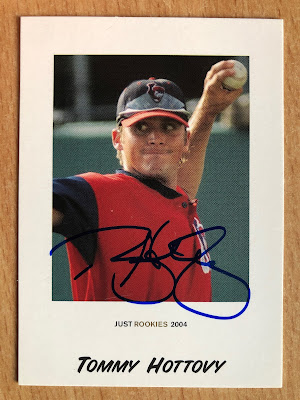 Up next are autographs of four different players with whom I share a surname: Greg Olson, Matt Olson, Garrett Olson and Gregg Olson. 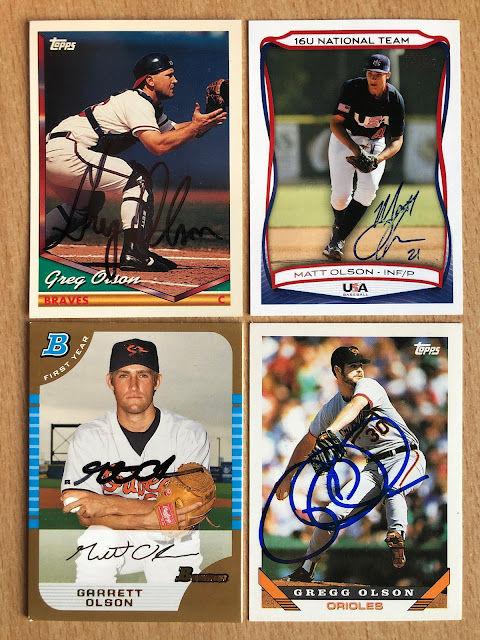 I have player collections of Greg and Gregg, but this is only my second card of Garrett and his first autograph. I've been known to snag Matt Olson base cards at shows on the cheap when I run across them, and this is my second autograph of his.
Randy "Big Unit" Johnson was always one of my favorite players. This is not that Randy Johnson. 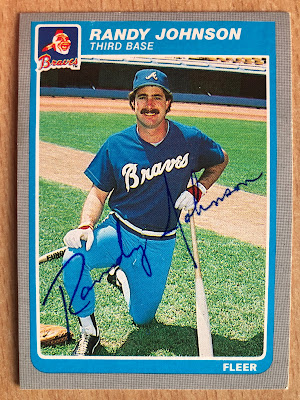 This Randy Johnson played 204 games for the Braves in the early stages of the 1980s. Joke's on me! 😂 Good one, Jane!
This was my favorite card of the lot, and honestly it wasn't it even close. 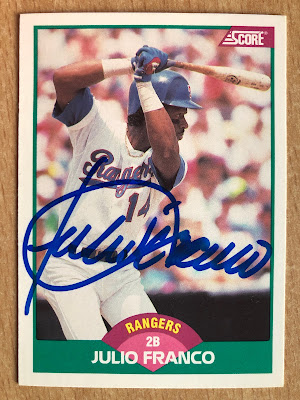 Julio Franco had one of those batting stances every kid wanted to imitate and it's shown on this card. Additionally, Julio's signature is beautiful and he's another one of those players who holds a footnote in my memory banks as one of the oldest to ever play baseball at its highest level.
Julio was actually my answer to a trivia question last month, albeit the wrong answer. "In 2004, this player became the oldest major leaguer to win a batting title." Julio hit 0.309 in 2004 as a 45 year old. FORTY-FIVE! But, alas, he did not win the batting title that year. (The correct answer is a slugger who is currently on his 10th year on the current HOF ballot.)
Thanks for the great stack of autographs, Jane!
Posted by P-town Tom at 1/02/2022 04:16:00 PM