This Package Hit The Spot

A very large padded yellow mailer filled my mailbox late last week and its contents were all of the same theme: Cubs cards from years past! John, from Johnny's Trading Spot, must have needed to clear out some room in his collection. I'm always happy to help out!

In all, there were over 200 cards in the mailer . . . enough to draw the attention of Holiday, my curious cat. 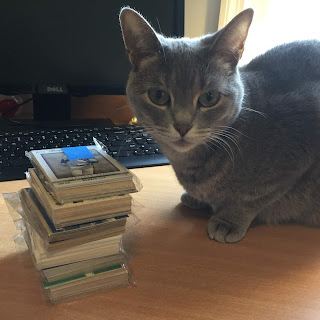 There wasn't just complete Cubs randomness. Instead, the contents were very well organized and it seemed as though there was 8 to 12 cards from about twenty different sets. Nearly all of the sets were from the 90s and the first decade of this century. 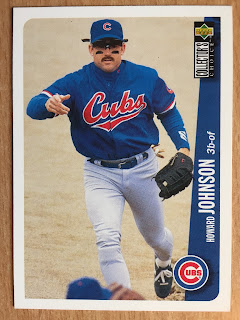 The back of this '96 Upper Deck Collector's Choice card shows him playing in 87 games and hitting 0.195. I believe this card would qualify as a sunset card. Eat your heart out, Dimebox Nick!

Milton Bradley, from the 2009 Topps Ticket to Stardom set. 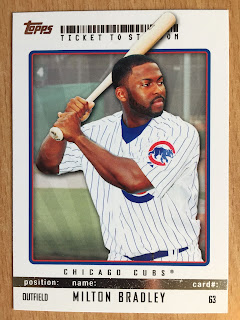 When the Cubs signed Milton Bradley I thought he was the perfect fit: an outfielder who could hit for average and take a walk. Somehow I completely overlooked the fact Bradley was a complete headcase. Oy. 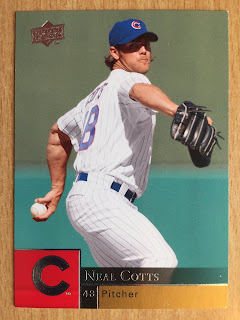 I remember Neal Cotts as a pretty fair lefty reliever, but one of my friends used to call him Captain Chaos.

A Molina in a Cubs uniform! 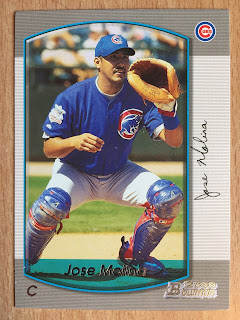 The back of this 2000 Bowman card states that Jose Molina is the brother of Benjie Molina. It makes no mention of Yadier, who would be drafted by the Cardinals that same summer. 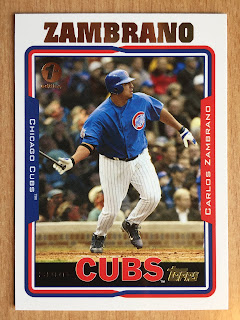 I still have fond memories of Big Z at the plate. Still only 38, Zambrano played for the Chicago Dogs this summer and pitched in 35 games and even got 19 plate appearances in a league that has the DH.

Woo-Hoo!  There were some Brooks Kieschnick cards in the package! 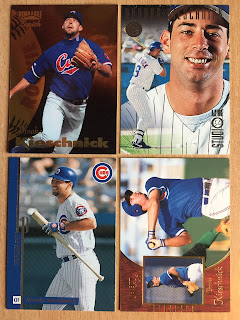 Three of the four were new to my player collection of the former two-way player. I now currently have 98 different cards of his. So close to the century mark!

Last up are the only cards in the package from 2019. 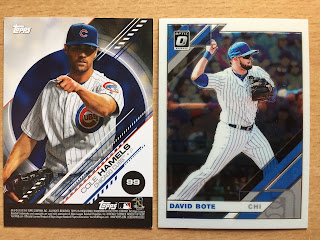 The Cole Hamels is from the Topps Sticker set and has Marcus Stroman on the front. I love me some stickers! The Bote is as shiny as can be... adding another card of Bote McBoatFace to my collection makes me smile.