Complete Sets from the Estate Sale

A little over two months ago I attended an estate sale in P-town that just had an astronomical amount of cards being sold.

I made out with a nice haul which contained a few shoe boxes crammed with top loaders and a couple of overstuffed binders. It has taken me the last nine weeks to get everything sorted to my level of meticulousness, but I finally have a grasp on what I now own.

Today we're going to take a look at the complete sets I added to my collection.  In an upcoming post I'm going to throw out a few want lists for sets that are darn close to being complete. 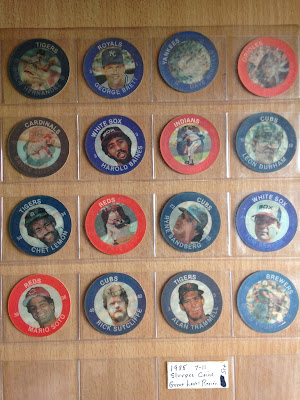 There are sixteen coins in this set and cover players from the Tigers, Brewers, Reds, White Sox, Orioles, Royals, Yankees, Cardinals and Cubs, including Sutcliffe and Sandberg. I'm not sure how the Yankees and Orioles are part of the Great Lakes Region, because they seem more like the Atlantic Coast region to me. 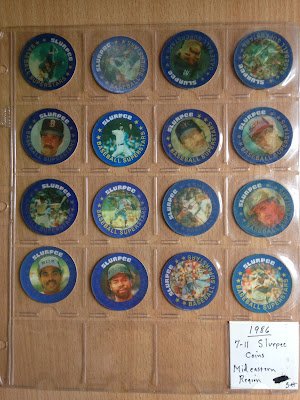 Another sixteen coins in this grouping. This time each coin is shared by three players, which I like immensely. The one in the far left column, third row down, is titled "MVPs" on the back and has Robin Yount, Willie Hernandez and Ryne Sandberg. The coin underneath that one is titled "Rookies" and pictures Ernest Riles, Ozzie Guillen, and Shawon Dunston. 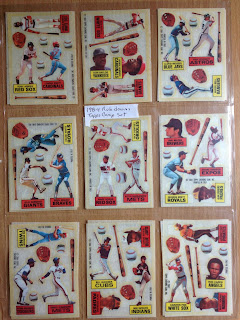 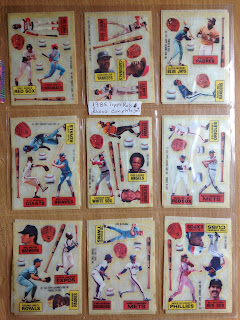 Many of you have seen these before. I've taken pictures of only the first pages, but there are thirty-two "cards" in each set. 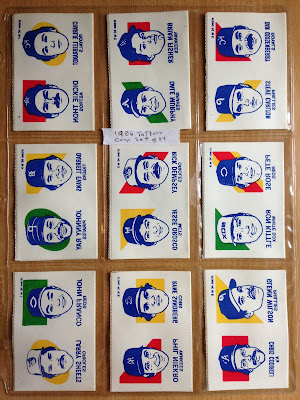 There twenty-four rub down sheets, but I had only seem them ripped apart until now.
Subtract the snow cone from this picture and that was the look on my face when I unfolded one of these rub down sheets.
Check this out! 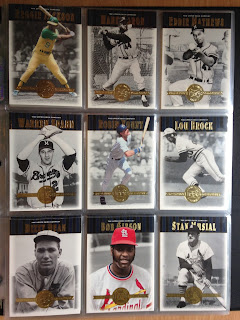 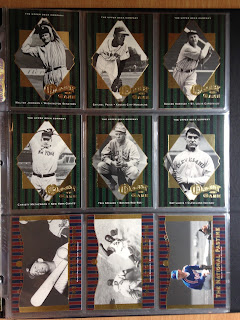 I've been receiving the Cubs from this set in trade packages for years. The base cards (1-90) are nice, and come in three different designs, but the inserts are where it's at. Unfortunately the insert sets weren't heavily represented in the estate sale lots I purchased. C'est la vie. Regardless, I'll never pass on a set of Hall of Famers.

In total, I picked up these five odd-ball complete sets and the one UD set for about twenty bucks. They don't sell for much on Ebay and could probably be had for about that amount in total, but I'm pretty happy to add all of them to my collection. Also, it's great that they came in a binder with pages so I can flip through during commercials breaks of a Cubs telecast and enjoy!

Stay tuned for the next post as it will contain three sets that I need some help trying to finish. Until that time, thanks for stopping by and reading!
Posted by P-town Tom at 6/13/2016 09:01:00 AM