Welcome to another edition of Pack Wars, ladies and gentlemen!  On the left we a wax pack of 1988 Topps, coming in at 15 cards and one 26 year-old piece of gum.  On the right we have a newer release in 2014 Stadium Club, which measures in at a measly five cards.  Sadly, sans gum. 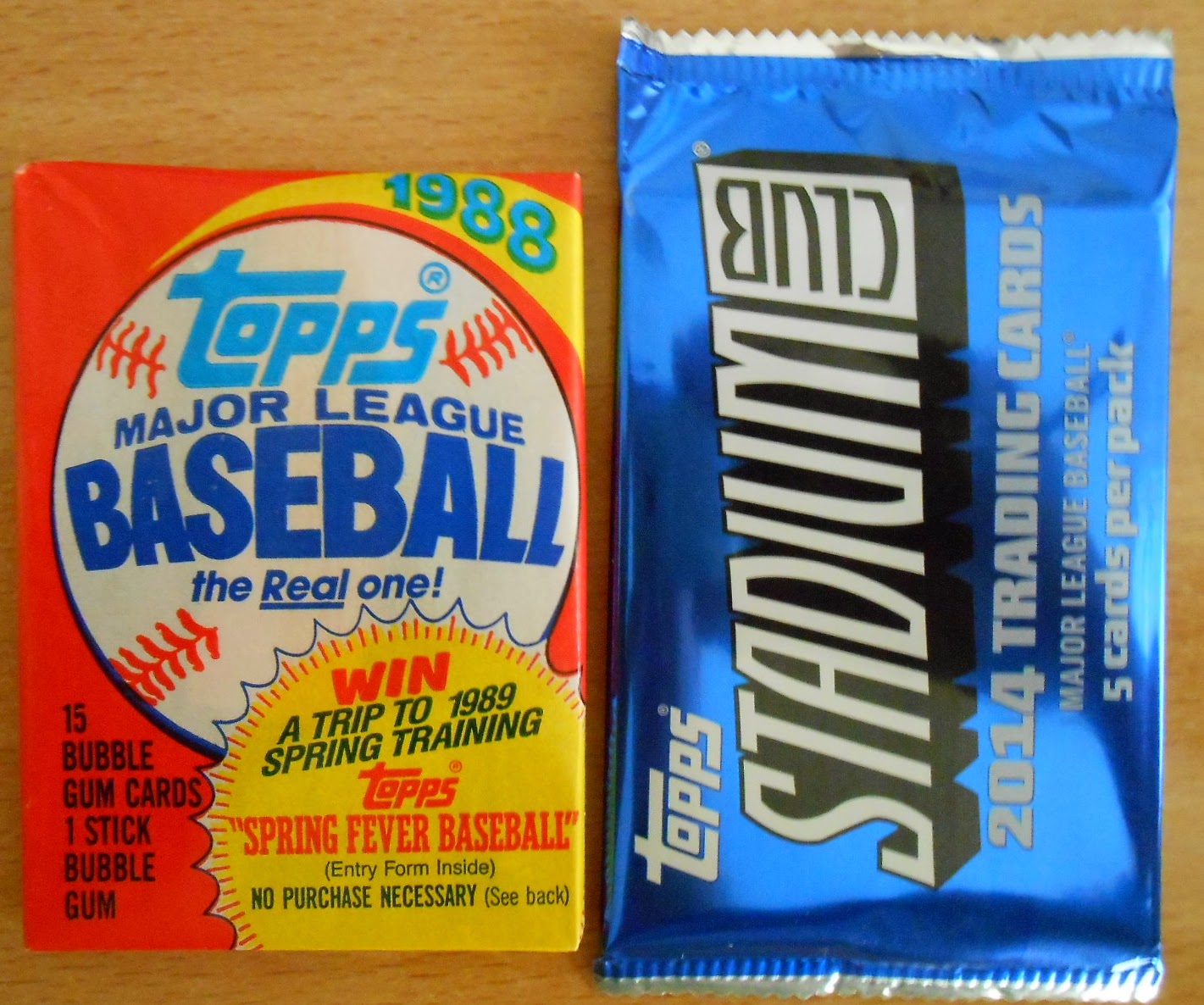 Let's hope the Stadium Club brought it's 'A' game, because it will be matched up against three cards in each round! 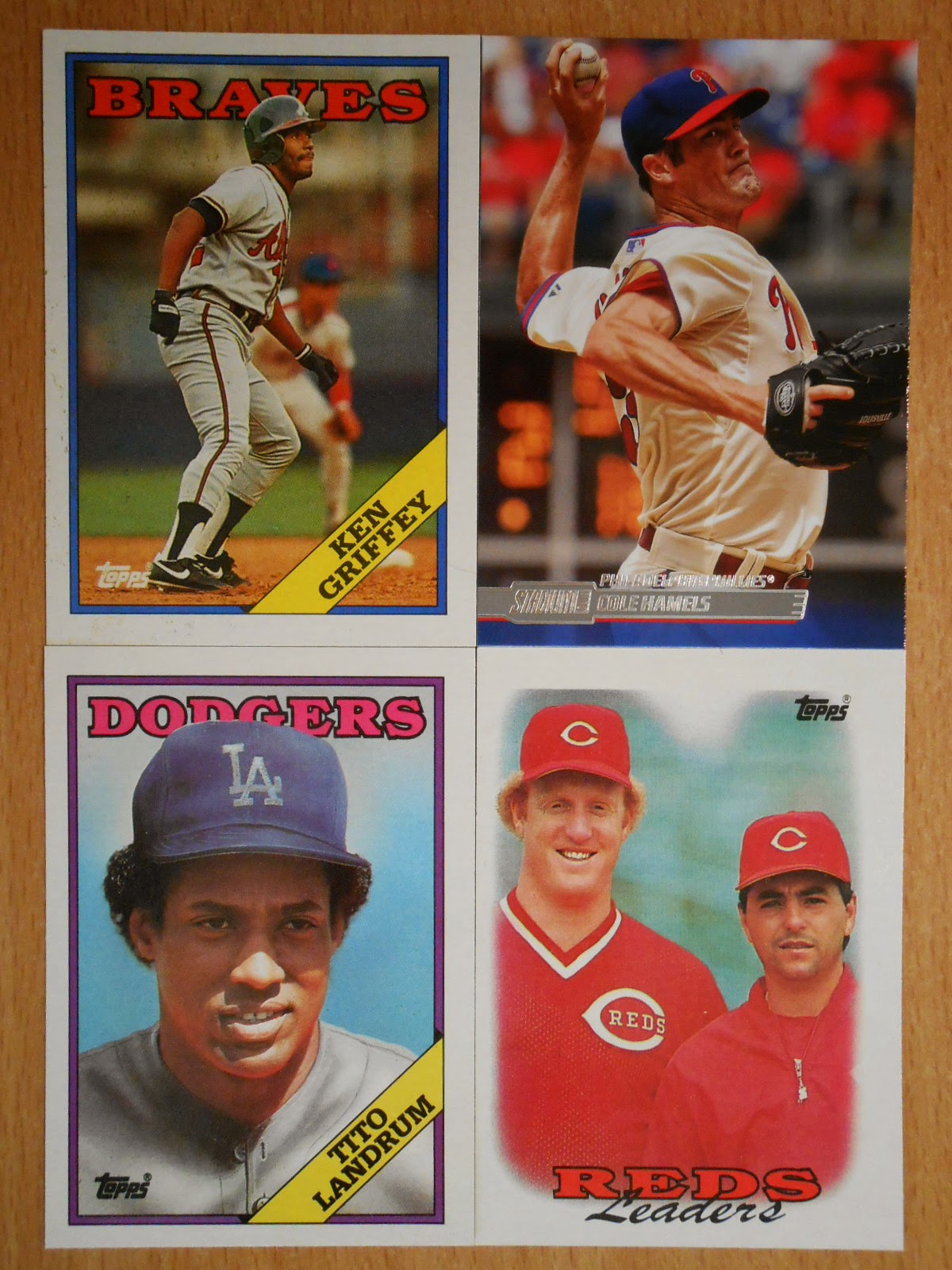 Tito Landrum and Tom Browning seem to have the same barber.  Ken Griffey has a wax stain on the back.  Stadium Club throws out an unimpressive first card in Cole Hamels.  Although, there is speculation that the Cubs may trade for Hamels this off season.  Stadium Club strikes first with a speculation point. 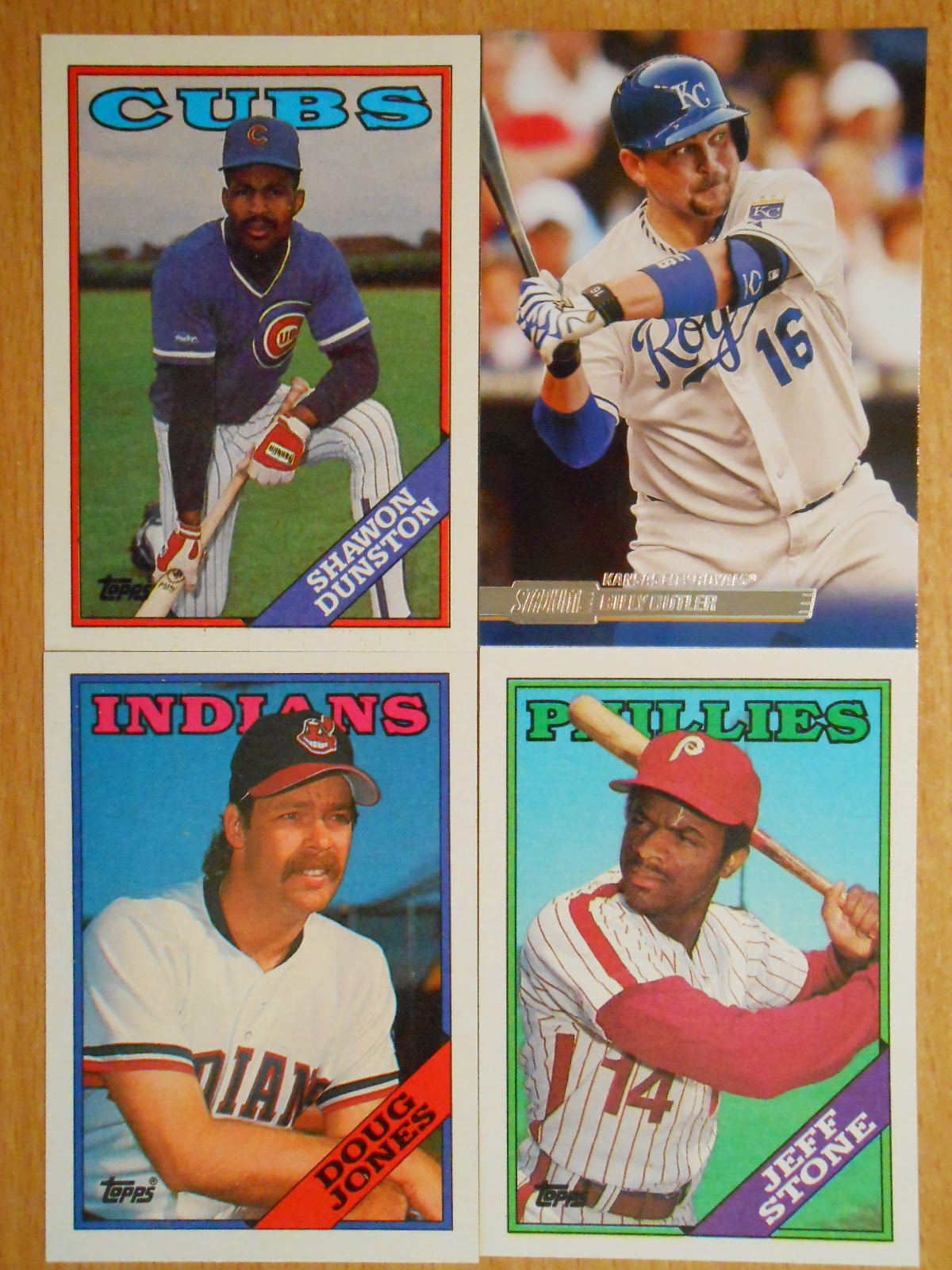 Shawon Dunston!  That's a nice pull for this Cubs fan.  I'm not sure who Jeff Stone is, but Doug Jones has a nice flavor saver there.  No mention of Billy Butler's nickname: Country Breakfast.  Bummer.
Acquired: Via Draft?  Was Topps too lazy to look up the round or year?  Laaaaaaaazy.  Don't worry Topps, I got you... 1st round of the 2004 draft.

Past Topps ('88) thanks Present Topps ('14) for being so lazy and basically handing Past Topps a point. 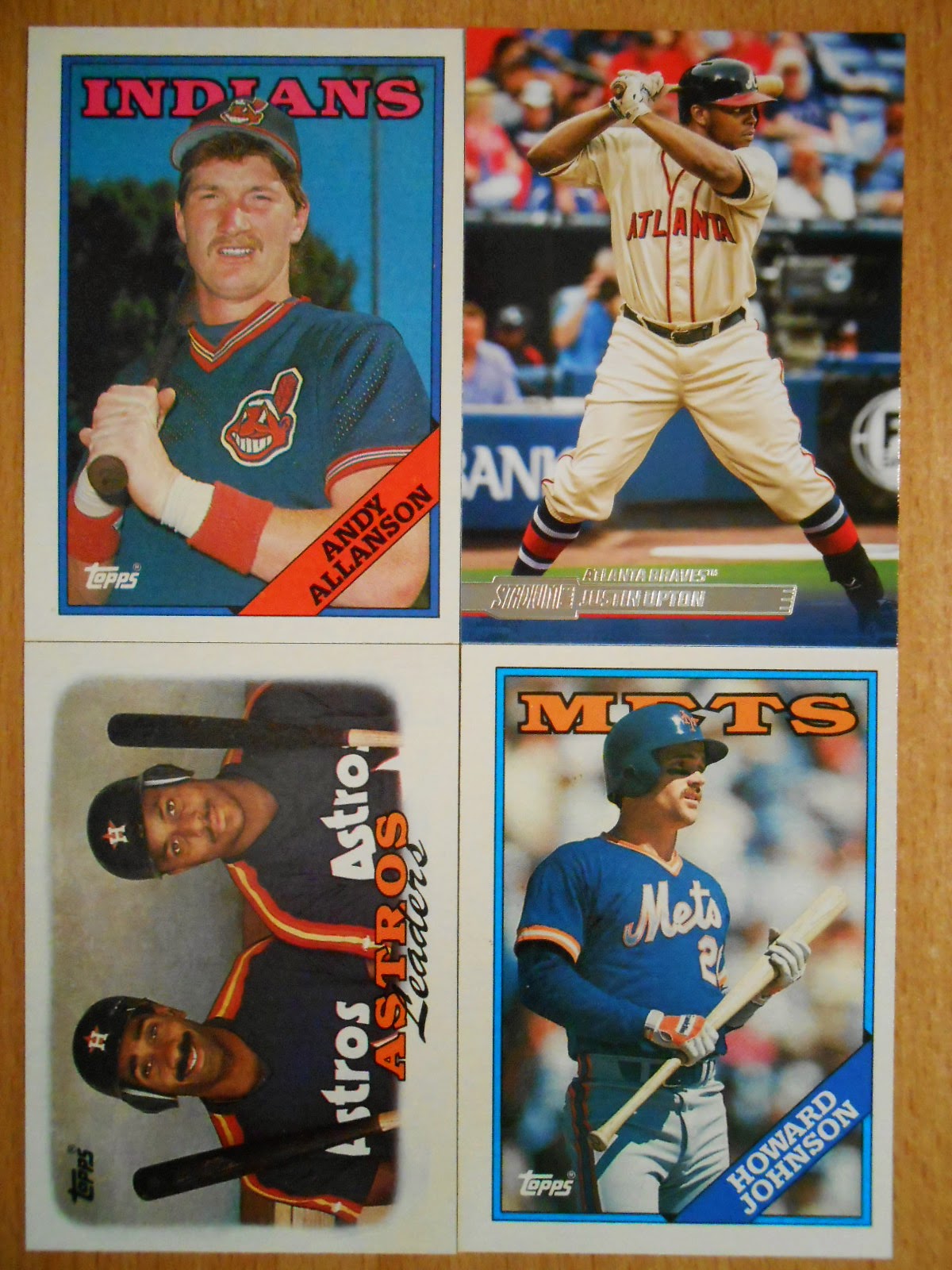 Whoa!  Justin Upton is sporting a throwback uniform.  Cool!  But wait, so is Andy Allanson, Howard Johnson, Kevin Bass, and Billy Hatcher.  Hmmm...   The point goes to '88 Topps because I always like Howard Johnson.
HoJo. He had a shortened nickname before it became cool.  Yes, I'm looking at you ARod et al.

For the record, if Stadium Club used this picture of Justin Upton on his card, then the Uptons would have earned Stadium Club a point. 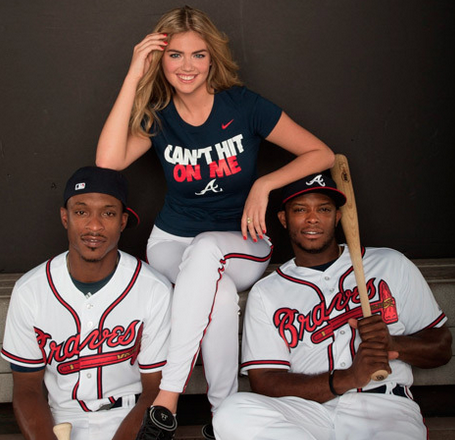 Could a pack of junk wax take down a mid-end Topps product from 2014?  Crazy to think so, but there's still two packs left. Jose Abreu won me a fantasy baseball title this year.  End of story.
(Boy, I like rounds that are easy to score.) 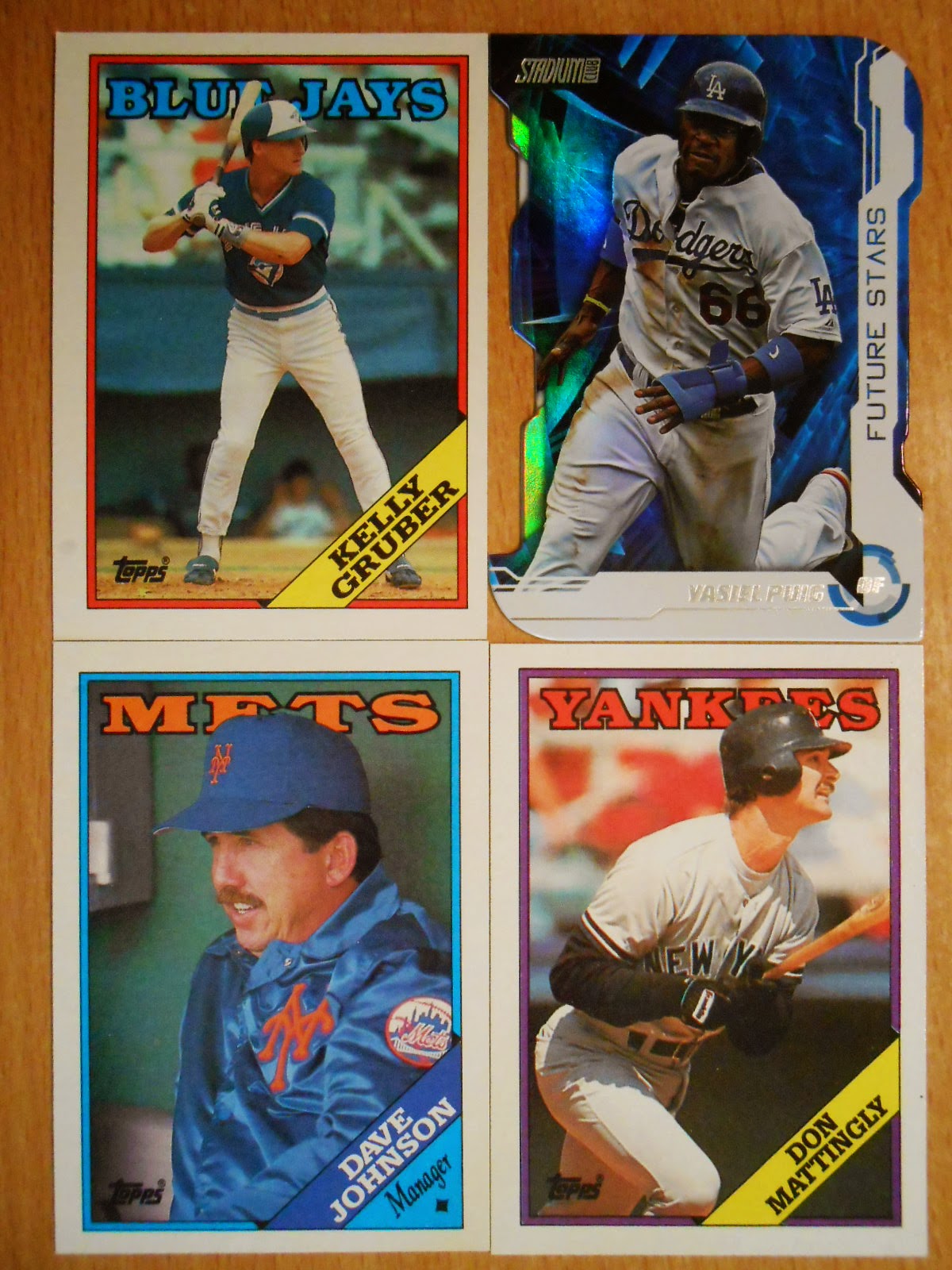 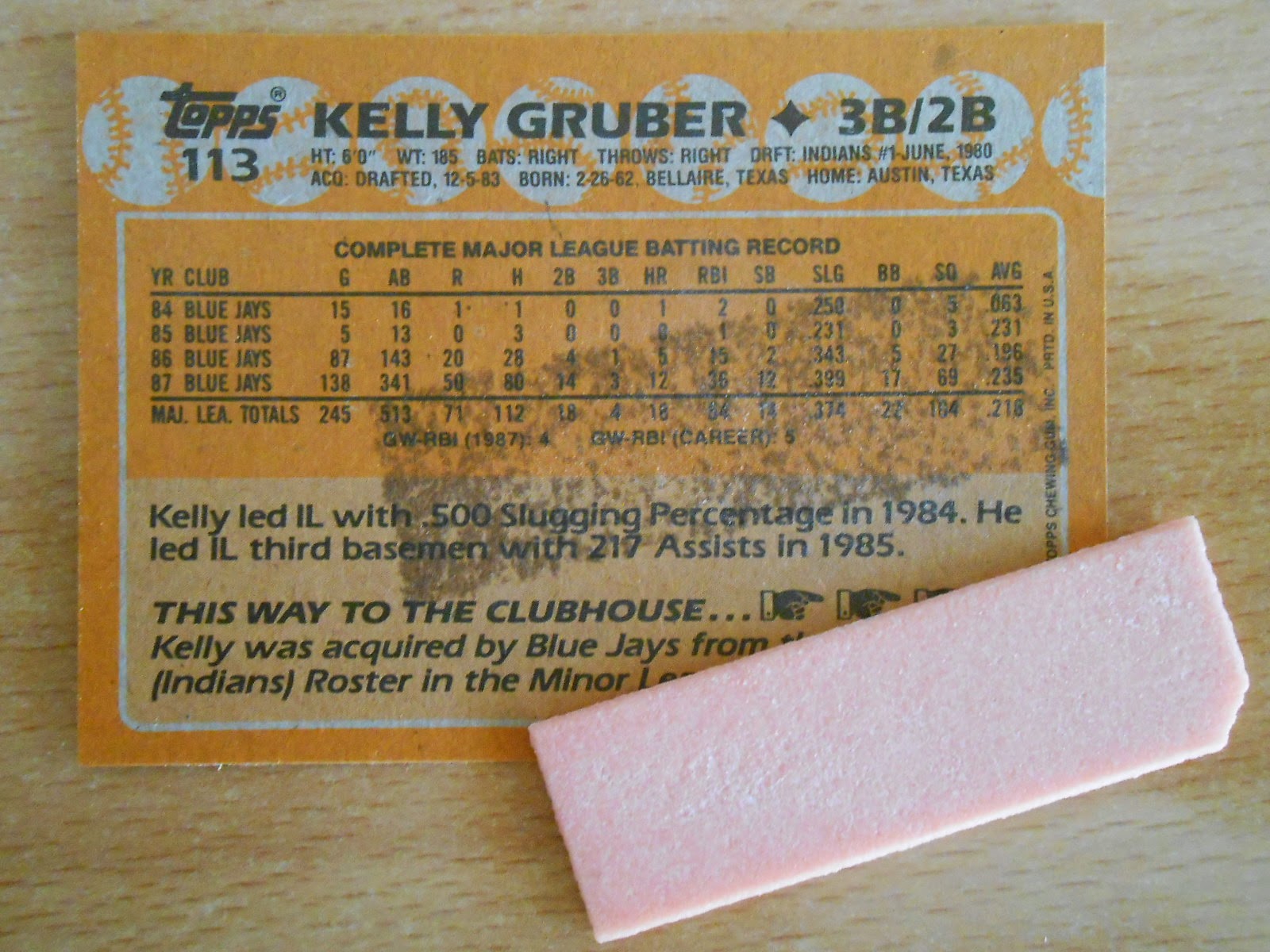 Wow.  Lot's to love about this matchup.  Mattingly was a beast of hitter in the 80's.  Davey Johnson is sporting a sweet mustache.  Kelly Gruber, a fine third baseman in his day, has the best gum stain I've ever seen!
Stadium Club?  I pulled a Yasiel Puig die cut Future Stars insert.  These go for a bout two bucks on The Bay.
The three Topps cards and the gum won't sell on the Bay at all.  Maybe I can get someone to buy the gum for a few credits on Listia?

I'll give this one to Stadium Club, but only because the '88 cards are all duplicates and I don't have many Puig cards.  Kind of an anti-climatic final decision.  It is what it is.

So, 2014 Topps Stadium Club finds a way to defeat the '88 Topps Wax Pack.  It took a rally in the form of Jose Abreu and Yasiel Puig to do it, but I think the other judges out there would side with me on this one.  If not, let me hear you in the comments!