My collection has a modest little run of completed Topps sets from the past: 1986 through 1992.  I picked up the '86 set for five bucks at a card show last year, and I challenged the blogosphere last year to trade me their '87 repeats to help me build that set, which was a fun little project. The rest of the sets were built from packs back when I was a middle school kid addicted to cardboard.

It would make sense to chase the '85 set to continue the run, because it is my favorite aesthetically from the 80's, but the 1984 set is the elephant in the room. Let me explain...

Wes, the crazy mad-bomber of largess cardboard packages from Jaybarkerfan's Junk, has hit my mailbox so many times that I have lost track.  I was long overdue to send him a payback package.  When I got wind that he was working on the '84 set I took to eBay and found a nice auction described as containing 1400+ cards, but it was more like 1,600+ cards. 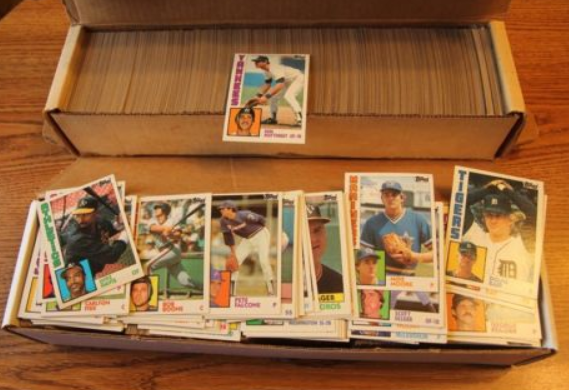 Of the twenty-three cards missing from Wes' set only four were bigger names (Pete Rose, Eddie Murray, Cal Ripken, and the Strawberry rookie) and the rest can probably be had for pennies.  I figure the eBay seller must have purchased a big collection and posted the 84's without really sorting through to figure out what was there.  He/she probably didn't want to sift through two 800-count boxes of unsorted cardboard from three decades ago.  At about a penny per card I was happy to do it!

As a bonus I was able to send out a couple of PWEs and a large box for Wes into the blogosphere.   Nice.

And now I have a new set to chase!   I didn't pick a 2014 set to build for the first time since I got back into the hobby in 2009.  Instead I decided to save a little money and knock some of the others off of my "to be completed" list, and I was able to cross of eight from my list so far!  Yes, it's been a good year.

If you'd like to help by trading me some '84 Topps, then I would be more than happy to try to make it worth your time.  Just send me an e-mail or leave a comment!   Here's my want list.  Thanks for stopping by!