It's early January and a baseball fan can't help be just a tad giddy about what the upcoming year will hold.  How will my Cubs fair in Year 2 of the major rebuild?  How will the fan in me adjust to the Peoria Chiefs' new affiliation with the ... gulp ... the Cardinals?  Which MLB ballparks will I be able to cross off of my list? 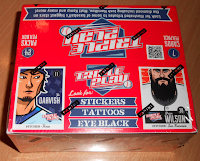 1. Collect and finish only two 2013 products. Last year I surveyed the field and went after Topps Archives, and find that I'm still working on the short prints.  Bleck.  Meanwhile I was purchasing Opening Packs, because they were affordable and I needed something to rip.  After many trips to the LCS I eventually reached the point where it was feasible to finish the set.  Done!   Then Panini Triple Play came out of left field and I fell in love with that set.  Then I was given a box for my birthday.  A want list will be up before too long.    Three sets in a year?  Many will scoff at such a low number, but it made my head spin.

In summary, I'll be waiting for the 2013 Triple Play version to hit store shelves and probably a Topps product.  But, which one?

2. Clean up the Man Room.  There are cards all over the place.  Some are reserved for trade fodder.  Some need to be put in binders.  Some need to find a home in my Cubs box.  Many are unsorted and need a place to go.  I'm kind of a neat freak, and the state of the Man Room is really starting to bother me.

4. Find a card show that has a dime box and indulge!  Nick, at Dime Boxes, seems to run into these pretty regularly, and he visits shows in the Chicago-land area.  Hey, that's just a short trip up I-55 from me.  Road trip!

5. Add my first 1/1 card to my collection.   I have three of dayf's 1 of 1 cards, which are most certainly top shelf and appreciated.  And I was once in possession of 2011 Topps diamond embedded card, but I flipped that to buy more cards that were of value to me.  But I would like to add in a 1/1 card from Topps or Panini that features a Cub.  Perhaps a printing plate is in my future? 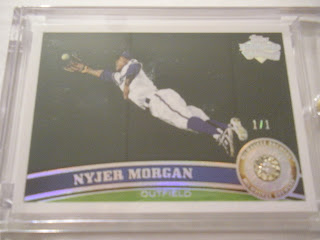 I'd also like to spend less on cards, but complete more trades within the blogosphere.  Unfortunately, it's hard to accumulate trade fodder without spending.  Just another hurdle that I'll have to figure out how to leap.  So for now, I'll hold off on making that one official.