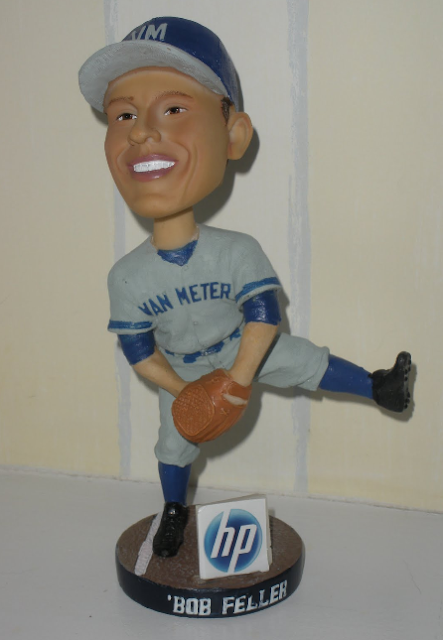 Bobblehead #6
Name: Bob Feller
Position: Starting Pitcher
Team: Van Meter Bulldogs (High School)
Description: 7.25 inches tall; Bob is in the middle of his windup with his leg fully extended.
Relevance: I spent a couple days in Iowa last summer and I visited the Field of Dreams movie site, caught an Iowa Cubs game, and visited the Bob Feller Museum in Van Meter, IA.
How Acquired: Giveaway promotion at the I-Cubs game on July 19th, 2011.
Other Notes: Van Meter is a small town just west Des Moines where Bob Feller was born and raised.  The museum there is a nice little tourist attraction of one of the best flamethrowers in the history of Major League Baseball.
Player History: Bob Feller struck out 15 batters in his major league debut and two weeks later fanned the same number of batters as his age (17).  (Only one other player in MLB history has accomplished that feat, and he will soon be featured in the countdown.)
During the late 1930s, Feller was recognized as the most well-known young person in America, with the possible exception of Shirley Temple.  Feller’s high school graduation was nationally aired by NBC radio.  Feller served four years in the military during his early 20’s, but that didn’t stop him compiling 268 wins, 279 complete games, and leading the American League in strikeouts seven times. Feller pitched three no-hitters, participated in eight All-Star contests, and was elected to the Hall of Fame in 1962.
Bonus Note: Bob Feller visited Peoria in the late 1980’s and signed autographs at a Chiefs game.  I don’t recall if I was able to score a Feller autograph.  Unfortunately, the eleven year old version of me didn’t have the interest in baseball history that I now possess.  Oh, to turn back the clock! 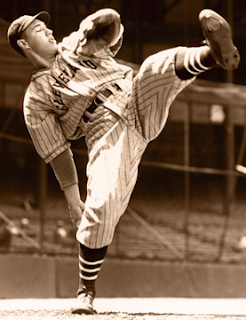