During the summer of 2010 I had lunch at the Chicago Grill on North University a couple of times. It's a nice restaurant whose menu features gyros, poorboys, Chicago dogs, burgers, gyros, baklava, and many other tasty items.  You place your order at the counter and the staff brings it out to you on nice ceramic plates.  As you wait, you have two seating options: tables decorated with sports cards or regular ol' booths.  Um, tables please!  I'm never really sure how long it takes the staff to cook my order, because I'm always distracted by the 1990's cards from the four major sports.

Then I thought, "I could do this.  I could make something that distracts myself!"

I already had the item in mind... the coffee table in the Man Room could use a refinishing and repairing (bottom right corner in the picture).  We picked the table up at The Attic or a garage sale a few years ago for cheap.  The easiest solution I had in mind would be to construct a new top to fit over the existing surface. 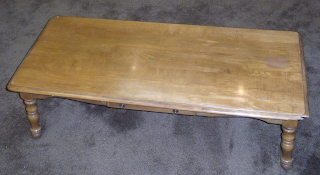 I collected cards for a good year, all the while thinking about the creation process.  I did some research on YouTube, built a fame, bought some epoxy resin, and eventually got started this past August.  It's been a slow process.  The frame took only one weekend to build, but I had to run to Dad's to borrow his brad-nailer to attach the frame.  It took another week to stain the wood to match the existing sun-bleached legs. Another trip to Dad's to borrow some of Grandpa's wood stain to darken up the first coat of stain I had applied.  Thanks for the assistance, guys!

What type of cards would I use for my table?  I follow the Bulls, watch the Bears, but I'm infatuated with everything Cubs.  So, I started looking on eBay for cheap lots of Chicago Cubs cards.   I set some rules follow:
1. everyone on the table must be in a Cubs uniform
2. no more than one card from any given set
3. no more than one of each player

Halt!  School started and the process slowed to a steady crawl.  Each weekend I would sit down and "mess" with my card collection.  I had accumulated a little over two thousand Cubs cards and I had to figure out which ones would make the final cut!

114 cards were needed in all.  Some of the cards were easy to choose:

Turk Wendell would have a spot because of his antics.  Turk always wanted to look "tough" on the mound to collect any sort of psychological advantage he could over the hitter.  In his mind's eye players who used chewing tobacco were tough and scary.  He didn't like the risks associated with chewing tobacco, so he chewed gobs of black licorice instead.  Except, he didn't like the flavor of the licorice, so he would brush his teeth in between innings.  He was an odd one.  Click here for a few more of Turk's quirks. 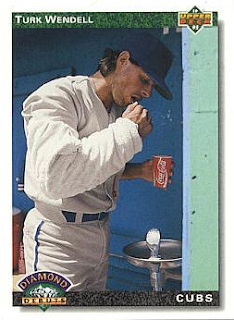 Glenallen Hill was one bad dude, although his card shows his softer side.  His muscles appeared to have muscles. He was a force in Cubs' lineup for a couple of years and was a fan favorite for how hard he played and how far he hit the ball.  He's the only one that has hit a ball on TOP of one of the apartment buildings outside of Wrigley.  I remember watching that game on TV and exclaiming, "What the heck did I just witness?!?" 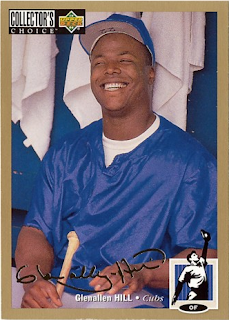 Bobby Scales, now of the Nippon-Ham Fighters in the Japanese League, was another no-brainer for me.  Why, because he was a minor league lifer that finally got a chance to play in the bigs and he played well. He came up in 2009 had a few big hits during his first week at the age of 31.  When I found out he was my age at the time AND he was a substitute teacher in the off season I was hooked.  I was sad to see the Cubs let him go, but I'm glad he's still chasing his dream! 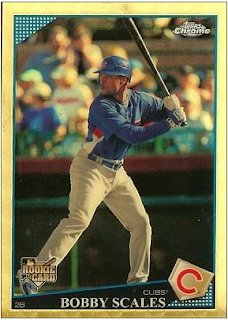 Then it started getting tough.  I know of a ton of Cubs, but some I had absolutely know connection to.  So, I sprinkled in a couple of minor league Cubs that I cheered for when they played with the Peoria Chiefs.  Thank goodness Bowman seemingly produces cards of t-ballers!  Welcome to the table Alberto Garcia and Nelson Perez!

Managers?  Sure, let's add them in!  Sweet Lou, Dusty, Don Zimmer, Jim Frey, Leo Durocher, and Charlie Grimm.  That's a manager representative for every season they made the playoffs (or came close in Leo's case), except Jim Riggleman (1998), since they last played in a World Series with Grimm.  I liked Riggleman, but couldn't find a card of him in a Cubs jersey.  C'est la vie.

What about the villains?  Well, no Carlos Silva or Milton Bradley that's for sure.  Sammy? Yeah, his ego and juice defined the Cubs for over a decade.  Zambrano?  Yeah, as crazy as he is it was hard for me to see him not on the table.  So yes, Big Z was in.

So, I broke a rule.  Sandberg, Dawson, and Kerry Wood ended up on the table each a couple of times.  They are my favorites after all!  So, I broke my own rule... whatever.

Even still, with the rule breaking and all, I was one card short. 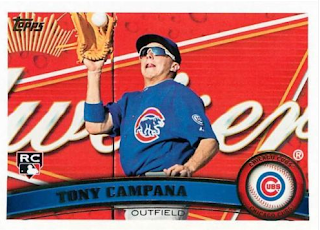 I needed one more card.  I wanted Tony Campana.  He hit his first professional homerun as a Cubs this summer.  Did I mention that it was an inside-the-park homerun?  I guess he made it around the bases in 14 seconds or something silly.  He is ridiculously fast, and hopefully the fourth outfielder for the Cubs in 2012.  Off to Baseball Card City and then my card collecting was complete!

I rubber cemented the cards down and started the epoxy resin stage of the project.  I had to use more than I originally planned on, but it turned out pretty nice in the end.  I put two coats of varnish on the table last night, and it gave the table a little bit of a "dimpled" look too it when you get up close.  I like the added character as it takes away from some of my other production flaws, which are all easily correctable if I choose to make another someday.

I enjoyed the challenge and I love the finished product.  I even have a little resin left over for another small project.  A baseball card blogger sent me a stack of Cubs cards and three made it onto the table.  He'll be receiving my next little "arts & crafts" project as a thank you. 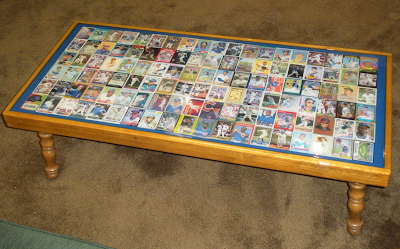 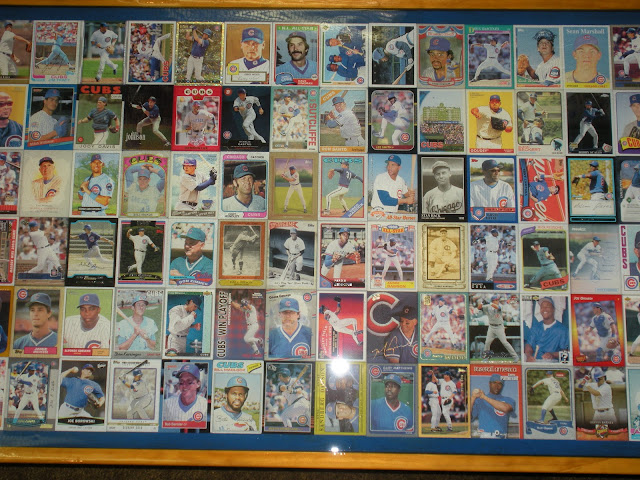