Bob Walk The Plank reached out recently and asked if I'd take on some 2021 Cubs. Well, that's kind of a silly question. The answer is, "I'll always take Cub cards!" 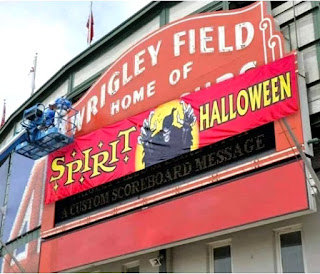 Let's start with the cards of players who qualify as current Cubs. 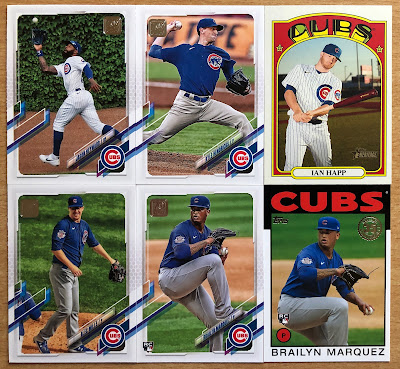 Jason Heyward, Kyle Hendricks, Ian Happ, Alec Mills and omnipresent rookie Brailyn Marquez can still be labeled as Cubs. The only big name missing from this group would Willson Contreras. 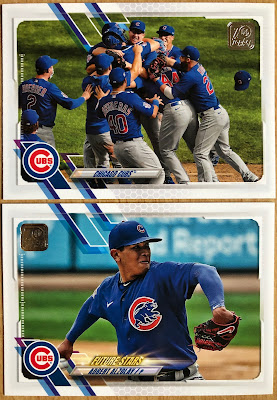 Count me as one of the collectors who enjoy team cards. I think Adbert Alzolay has some promise and I'm glad he'll get a full season's worth of innings this year to develop.

Another Marquez card and two other potential pieces of the future in Christopher Morel and Ed Howard.

Alright, time for those who have been shipped out.

Jed Hoyer, the GM & president, tipped his hand about an impending teardown by trading Yu Darvish to the Padres last December.

Like Darvish, Billy Hamilton and Jason Kipnis never suited up for the Cubs in 2021. Austine Romine is currently on the 60-day IL. 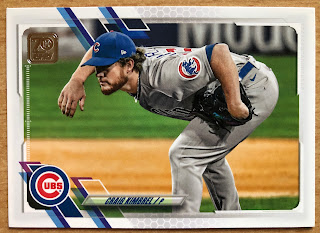 Kris Bryant will now be suiting up for the Giants.

No Anthony Rizzo in this package, which is fine. His inclusion would have probably just prompted me to reach for a box of tissues.
Thanks for the cards, BWTP!
Sigh.
I've created a Google Sheet for all those Cub fans who want to keep track of these trades. It provides a great look at exactly who has been shipped out and what the talent return was.
I'm still waiting to see some figures on what the payroll and projected roster currently looks like for 2022. I'm sure the front office will sign a few free agents over the winter, who they hope will perform well enough to flip at next July's deadline. I'm an invested fan with a curious mind after all.
Full rebuild mode. Again. Double sigh.
Thanks for reading and I hope your team took on MLB talent yesterday!
Posted by P-town Tom at 7/31/2021 10:11:00 AM