It must of been a couple of weeks ago I saw a blog post, from Trevor at Bump and Run Football Cards, where he showed a quite excellent haul from a sports card outlet otherwise previously unknown to me. BaseballCardStore.ca was and still is offering a 10 cent card sale. Woo-Hoo!
Talk about perfect timing for this collector. I have been wanting to go to a card show for quite some time now and I've have had an abundant amount of time on my hands as of late, as most of us probably have. 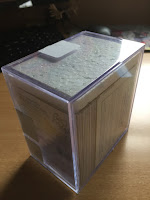 So I gave up Netflix for a night and instead dived into a virtual dimebox. Oh, and let me tell you what fun it was! 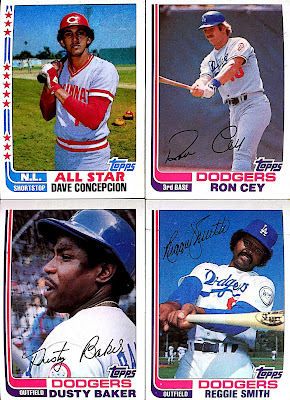 I first scanned the store's list of 1982 Topps, which outside of my Conlon project is my only current set build. Most of the stars were picked over, but I did find a quartet which I could cross off my list. I'm down to needing 113 cards to finish my Topps run of sets from 1978 through 1992.
Next up I looked into bolstering my player collections. 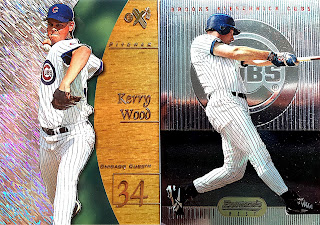 The Kerry Wood is an acetate card from the 1998 E-X2001 set and the Brooks Kieschnick is from 1994 Bowman's Best. The right half of the Wood card is the acetate portion, which shows off the wood grain of my desk. 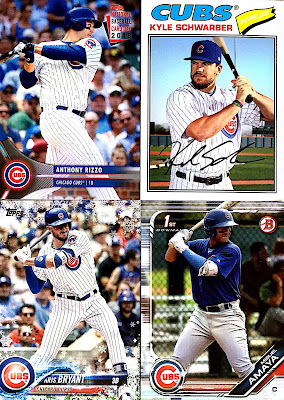 The least shocking addition of the four cards above is probably the Schwarber card from Topps Archives. The Rizzo is from Topps' National Baseball Card Day, the Bryant is the holiday parallel and Miguel Amaya certainly can't be had for a dime in my neck of the woods. 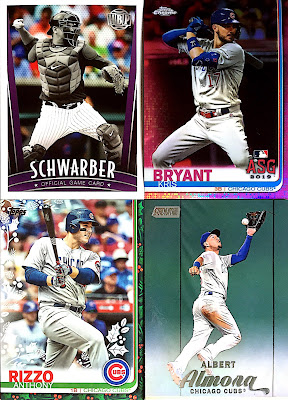 Gosh, what I hadn't considered was there's no way I would ever find Cubs cards, of this quality in a dimebox in Illinois. Schwarber is from the one-and-done Honus Bonus set, the Bryant is purple chrome parallel and the Rizzo is the holiday parallel. My favorite of the four is the Albert Almora from one of my favorite brands, Stadium Club. 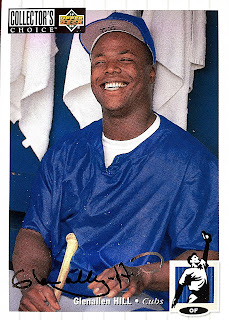 I already had a copy of this Glenallen Hill card, but it's not the foil signature variation like this one! 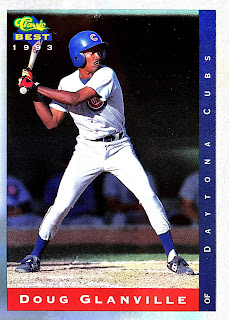 I was super excited to find this early Classic card of a young Doug Glanville with the Single-A Daytona Cubs. Glanville is one of favorite baseball analysts. 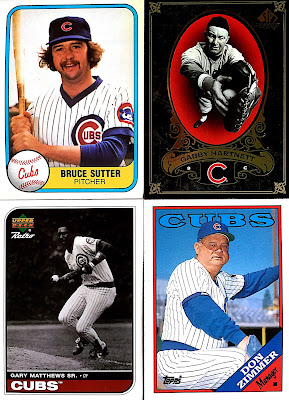 My Bruce Sutter, Gabby Hartnett, Gary Mathews and Don Zimmer card collections all got a nice boost. Sutter grabbing a bat is so awesome. Relievers aren't supposed to bat!  But, I also really like the photo of Hartnett. Oh, and before you poo-poo the Zimmer... keep in mind this one is from the Topps Traded set and it's not quite as easy to come by. 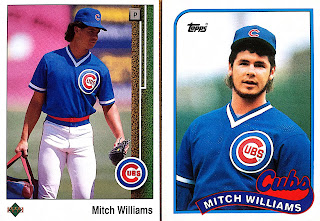 Early Mitch Williams cards! My mom would be proud!  She was a big fan of the Wild Thing.
I already had a copy of this card, but when you have a chance at a card like this for a dime you shouldn't pass it up. 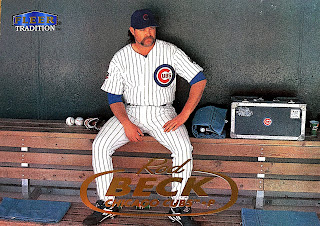 Rod Beck! His legend has done nothing but grow in my mind. I'm thinking he's all alone because it's the late innings and he's working on a no-hitter. Only a closer of Rod Beck's dominance could throw a no-hitter without ever starting a game. Yes, Beck is kind of like my Chuck Norris.
After checking my player collections I was just short of 200 cards and I really wanted to hit that mark so I could use my the title. I think most of us define a blaster at $20. No? 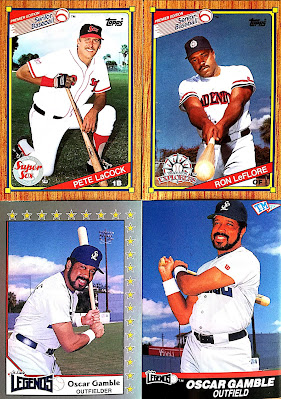 How about some Senior League cards?  Oh yeah! Many of the cards didn't have pictures uploaded for them and I was too lazy to do my homework. I gambled that Oscar Gamble would have his famous 'fro. I can handle a loss like that when it sets me back twenty cents. Plus, that card on the right is so awesome looking! 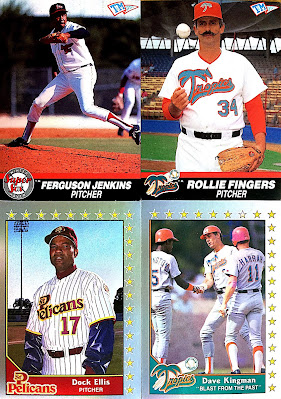 Up next, a couple of Hall of Famers, Doc Ellis and Dave Kingman. Just good stuff all the way around.
Here's the last card. I think I learned of this one on Dimebox Nick's blog. Tommy Lasorda is helping Ojeda with his pitch grip. I've done the same thing numerous times with my high school players. Naturally, I had to add this card to my stack! 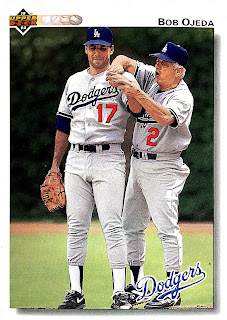 In all, I came away with 200 cards and a nice acrylic container for the price of a blaster plus shipping and handling. I don't think you can argue with that!
If you have the time, I would suggest giving BaseballCardStore.CA a try!
Posted by P-town Tom at 5/18/2020 08:54:00 PM