I was the recipient of one of Fuji's "Cleaning the Slate" packages the other day. It packed quite the punch, but it also got me thinking about my favorite players.

Ryne Sandberg quickly became my favorite when I was first introduced to baseball. He retired after the 1997 season and then a flame-throwing Kerry Wood burst on to the scene in 1998. Wood closed out his career in the spring of 2012, but guess who was already smashing baseballs in the low minors of the Cubs' system?
Yeah, the Vogelmonster!
I have to believe I'll be Vogelbach supporter until he retires. I'm plenty good with that.

Let's play a quick game of "What if?"

What if I was introduced to baseball a decade earlier? Let's say during the late 70's or early 80's... Who would I have gone crazy over?

The aforementioned players all have some common links: at least one All-Star appearance, Cubs ties, and good human beings.

Here's the card from Fuji which got me thinking: 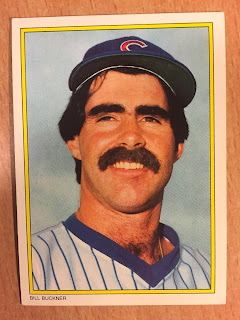 Bill Buckner and his bushy brows?  I know nothing of his personality, but I think he would be a pretty strong candidate to be my favorite player before Sandberg. Do you know anything about Buckner's persona? Would I have liked him?

Thanks for the package Fuji!  I know it was intended to wipe your slate clean, but we were clean! You just dirtied things up again. Sigh. No matter, I made a weak attempt this morning to balance out the scales again with a package I shipped out.   I hope this doesn't escalate into a Wes vs. BWTP thing. 😜
Posted by P-town Tom at 2/26/2020 05:06:00 PM