Sometime back Peter, from Baseball Every Night, mentioned how he was looking to build the 1992 Topps set. Well, the '92 set was right toward the end of my prime collecting years during my first trip through the hobby. I busted a ton of wax with my paper route money back then and hand collated two regular sets and one set of the gold "winners". When I returned to hobby I decided with so many duplicates that remained I might as well finish off a third set.

I know. I know. That's a LOT of junk wax from one year. The fourteen year old version of myself truly enjoyed ripping open packs, probably more so than I do presently. And, that's really saying something!

Anyway, back to Peter's chase of the 1992 Topps set. He's got a nice want list up on his blog. So, I sent him some junk wax without expecting anything in return.

But, well, we all know Peter. And if you don't, then you should really make the effort to introduce yourself. He's a super fun follow on Twitter and an excellent trade partner

I received an unexpected PWE last week and when I opened it up there was a nice little reminder of why Peter was sending me cardboard. Honestly, since I've turned 40 I've noticed I don't remember a darned thing unless I write it down. 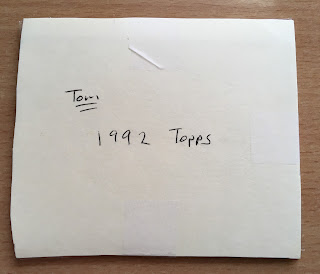 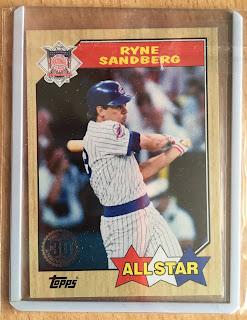 Wow, that's a trade I would gladly make again! Thanks for Ryno, Peter!