Blog Bat Around: The Origin(s) of Your Player Collection(s)

I don't think there's been a Blog Bat Around since March, and Kin made a comment yesterday which sould make for some solid blog entries from our little community:

So, I ask my audience, what is the reason for collecting the players you collect?

I have plenty of past and current players in binders, but there are a handful of guys who I've gone the extra mile and created spreadsheets to keep track of their cards in my collection.  I'm going to break those players down in chronological order.

#1 Ryne Sandberg -- I was introduced to baseball cards at a friend's 10th birthday party and one of the party favors was a rack pack of 1988 Topps. If you recall, one glossy all-star card was on the front of each of those packs back in the day and this was mine, thus effectively making it my first baseball card of a Cubs player. Now I have well over 800 different Ryne Sandberg cards! 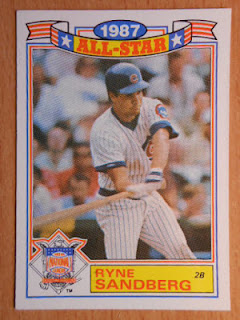 #2 Kerry Wood -- I chose Kerry Wood as my new favorite Cub when Sandberg retired, because we're about the same age, both were pitchers, and both had arm surgery at about the same time. I still remember coming back from class in college and turn on the TV and watching him mow down twenty Astros. That was a great day! I currently have 492 unique Kerry Wood cards.

#3 Kosukue Fukudome -- I like following the foreign leagues and I thought his skill set would translate really well to MLB... plus he was signed by my Cubs! I was convinced he would be a hybrid of Ichiro and Hideki Matsui, who both had excellent MLB careers after success in Japan. Yeah, I was a little off on that one. I have 164 Fukudome cards, including 40 from his time in Japan.

#4 The Vogelmonster -- Kerry Wood retired and Fukudome was on his way out of Chicago when the Cubs drafted an affable, hefty, and hard-hitting first baseman with their second round pick of the 2011 draft. I've always loved minor league guys and I figured chasing the cards of a somewhat obscure minor league player would be easy on the wallet. Plus, the Cubs hadn't yet traded for that Anothy Rizzo guy, so Dan Vogelbach became player collection #4. Over the years I got to see him play live a handful of times in the minors and met him twice for IP autographs. We even had a nice exchange at the 2016 Cubs Convention. I'm sitting at 134 Vogelbach cards, but the release of Topps Series 2 should help inflate that number. (See yesterday's post.)

#5 Brooks Kieschnick -- Two way players are very common in high school, much less so in college, and quite the rarity in the professional ranks. It sounds like a couple of #1 picks from the recent 2017 draft may get a chance to pitch and hit, which is pretty exciting. Brooks Kieschnick became one of these players and I noticed his cards piling up in my Cubs boxes. So, why not keep track? The funny thing is Kieschnick somehow flew under my radar until after he retired. (I blame college, starting a career, and getting married for that.) I have 78 Kieschnick cards, but he has many more than that out  there. 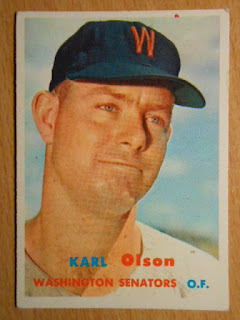 #6 Karl Olson -- Karl Olson played back in the 1950's. When I was in middle school my dad picked up his 1957 Topps card at a card show. At the time, I had never considered buying vintage cardboard. In short, I was enamored with his new find. My dad already was picking up cards of Greg Olson and Gregg Olson, players who shared our last name, but cards of Karl Olson seemed like a unicorn to me: magical and unattainable. Fast forward twenty-plus years and now I have a fairly complete Karl Olson collection, of eleven cards.

So, there you have it!  How about you?  How did your player collection(s) come about?