So, um, yeah. I was just re-introduced to second card shop in P-town. It's more of a coin shop, but it does have cards. There are a few boxes sorted by players and plenty of singles from the 70s, but not much on the current side of things. My sister says that my dad took us there when we were kids, but we didn't go there again because there were three other stores at the time which had more current product, which was what we were interested in at the time. Honestly, I had completely forgotten about the store altogether. 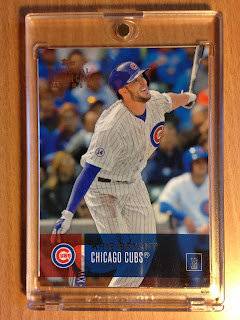 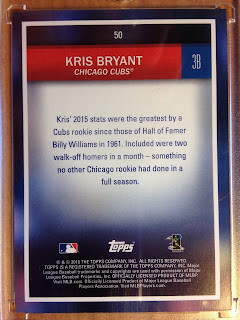 So I went back to the store and mentioned I saw the promotion and I was given a pack of cards. I purchased $10 worth of cards and was given the Kris Bryant above in a nice one-touch card protector.
For the record, I broke down and bought a jumbo pack of Topps Flagship after finding a handful of singles I wanted in player boxes. It was my first flagship purchase of the year after I told myself I wouldn't purchase any at all. 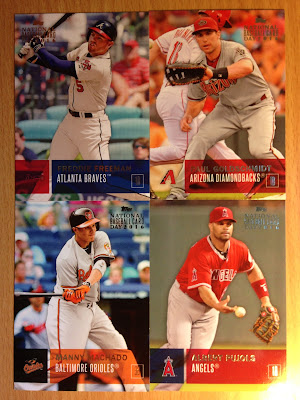 It was the only 2016 product on the shelves in the store and a complete impulse decision on my part. But, I had to spend $10 to get the Kris Bryant card! 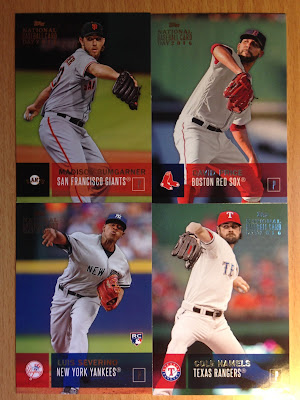 My sister went in the store later, spent less money, and some how came out with two free packs and two copies of Bryant. Huh. I'm not sure how that worked, but I'm not complaining. I was the recipient of all of her cards except one of the Bryants, a Trout, and a Rizzo. Thanks, Jane!  You're the best! 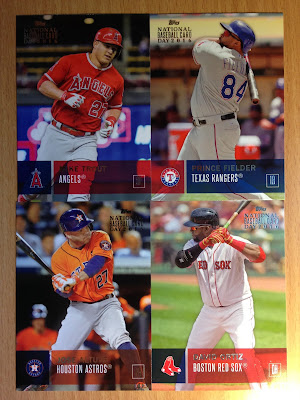 The Rizzo is my favorite. I love that throwback uniform and the gaze after the follow through on his swing. 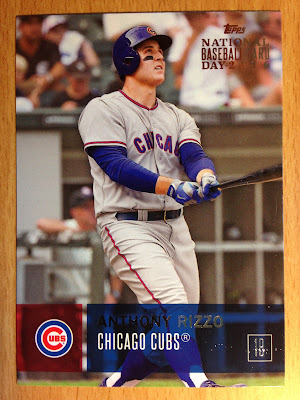 Here's the checklist if you're interested in seeing who was represented from your favorite team.  All of the non-Cubs pictured above are available for trade. Also, I have duplicates of Machado, Big Papi, and the recently retired Prince Fielder.  Let me know if you're interested and you'll have the card in a PWE before you know it!

I would love to try to add the Kyle Schwarber and Jake Arrieta cards to finish off my team set. Let me know if you have come across either one of those two guys' cards.