Expansion in the sports world has always caught my attention. When I was first introduced to baseball there were twenty-six teams in MLB. The Rockies and Marlins were added 1993 and the whole process was just so fascinating to me. I read everything I could about the player draft, mascot selection, uniforms, team colors, and anything else that I could find in print. None of the luster wore off when the Diamondbacks and Devil Rays were added five years later.

There have been rumblings about expansion the last couple of years in MLB. I for one would love to see four divisions of four teams each in the AL & NL. Add in a two wild card teams in each league and give the top two teams first round byes and I'd be elated. I Nashville and Las Vegas would make good additions. No?

I'm thinking about expanding also. Recently I was sent a pair of PWEs from Jeff, the author of Wax Pack Wonders, which got my wheels turning. 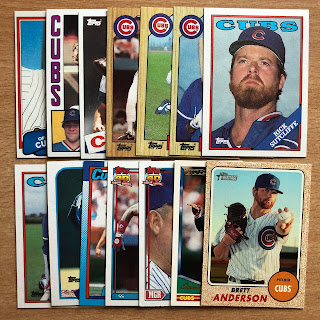 Above are a bunch of Cubs cards numbered 672 or higher. Jeff thought he would give me a head start on expanding my Cubs FrankenSet past 671.

You might be wondering why I stopped at 671. Well, there's two main reasons:

Jeff sent 14 cards from Topps and the other card manufacturers were only represented by the four cards below. 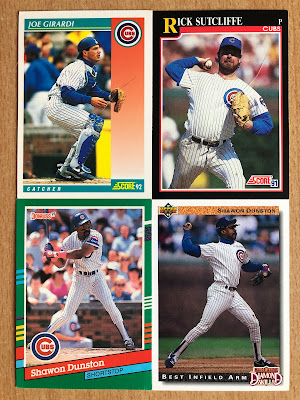 Here's a snapshot of what the backend of the FrankenSet checklist currently looks like: 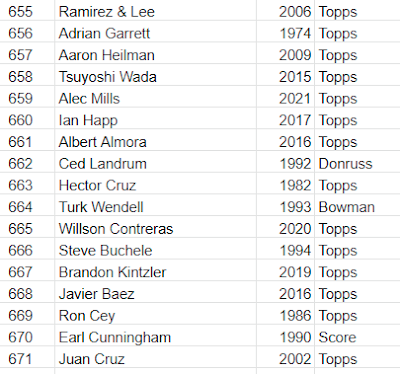 As you can see, Topps is king when it homes to the "high" numbers.
I'm not sure if I'm going to run with Jeff's expansion idea, but I'm not going to immediately sort these cards into my collection either. I'm going to think on it. It could be fun to chase down another 100+ cards until I get 792, which would be another hat-tip to Topps. We'll see!
Thanks for cards, Jeff!
What do you think? Should I expand my Cubs FrankenSet?
What about MLB expansion? Maybe MLB should focus on settling the new CBA this off season and work on "fixing" baseball before diluting the talent pool?
Posted by P-town Tom at 9/11/2021 04:22:00 PM