We're within one of my favorite stretches within my HOF Binder. Last week started it and it runs for another four pages or so. There's a bunch of recognizable names, little to no design repeats on each page and plenty of fuzzy-cornered vintage during these pages. 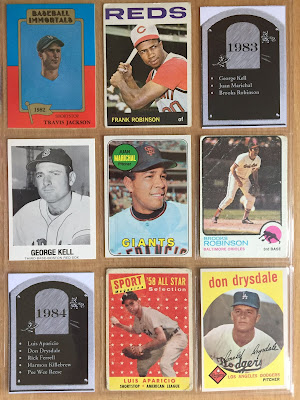 The two cards on the left-hand side of the page are on my radar to upgrade, but I absolutely love the rest! 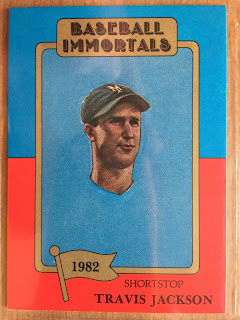 Travis Jackson was a shortstop for the New York Giants during his fifteen year career. He was voted to the second ever All-Star game toward the end of his career and probably would have made a few more had the ASG been around in the 1920's. Jackson was given entrance to Cooperstown by the Veteran's Committee, but I'm not so sure how deserving the lifetime 0.291 hitter was of enshrinement. He bashed 135 homers, which isn't bad for the era, but he also only rapped 1,768 career hits. He's probably best known for being the defensive glue on the infield that helped the Giants to seven NL pennants. 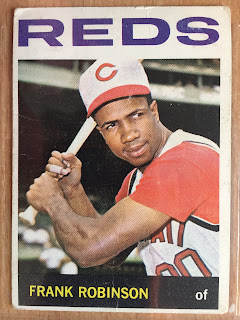 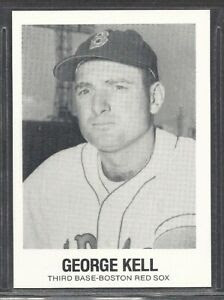 George Kell was a 10-time All-Star, earned MVP votes in eight different seasons and won a batting title. He manned the hot corner most of his fifteen year career, seven of which were for the Tigers. He was a career 0.306 hitter who launched seventy-eight homers in his career. Kell was voted into the HOF by the Veteran's Committee and BaseballReference.com lists Bill Madlock and Carney Lansford as similar batters to Kell. Good company, but not great company in my opinion. 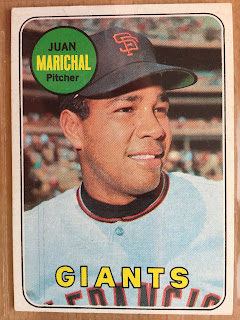 Juan Marichal was known as Laughing Boy because he was always smiling. For my money, Marichal had one of the more unmistakably recognized pitching motions the game has ever seen. He was a 10-time All-Star and he was absolutely dominant in those contests. Behind Sandy Koufax, Marichal is said to be the second best pitcher of the 1960's. He finished his career with a 2.89 ERA and a 243-142 record. 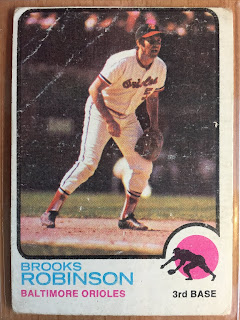 Brooks Robinson had one of the best nicknames ever: The Human Vacuum Cleaner. To this day he is the gold standard when talking about fielding ability at the hot corner. Robinson played 140+ games seventeen times during his 23 year career for the Orioles. During those seventeen seasons he was elected to fifteen All-Star games and earned sixteen Gold Gloves. Robinson wasn't just a fielder though, as he also won the MVP in 1964. Little known fact: When I played third base in little league I wanted to be like Brooks Robinson . . . but it was until high school that I stopped being afraid of the ball! FWIW, it's tough to be a vacuum cleaner when you don't stay down on ground balls. 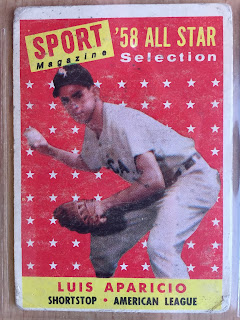 During the time Little Louie played many say he represented the of growth and development of baseball in Latin America. Luis Aparicio was known for his defense and speed. He was the Rookie of the Year in 1956 and led the league in stolen bases that season, which is something he would also do the next eight years. Aparicio was elected to All-Star games in seven different seasons and he was a Gold Glove winner nine times. Two of the top three comparable players to Aparicio, according to BaseballReference.com, are Ozzie Smith and Omar Vizquel, which I think are very sound matches. 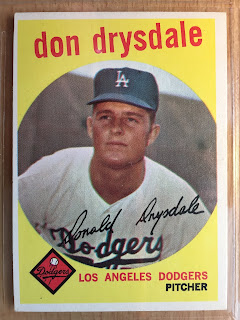 I think Don Drysdale sometimes gets overshadowed by the dominance of Sandy Koufax. He pitched fourteen years and recorded an ERA under 3.00 in nine of those seasons. He won a Cy Young in 1962, led the league in strikeouts three times, and he was elected to nine All-Star games. He retired after his age 32 seasons, due to nagging shoulder injuries, with 205 wins and an ERA of 2.95.

Again, I love the vintage on this page. But, wow. That Travis Jackson card. Jackson actually has some decent modern cards out there, any of which I would rather have represent his spot in my binder. The "floating head" is just not appealing whatsoever.

If I had to pick one card as my favorite out of the seven it would definitely be the 1964 Topps card of Frank Robinson. I remember Robinson as a much older individual when he was managing in the dugout. Seeing him pictured in his late twenties is pretty cool!