Recently I mentioned how I was a couple dozen cards away from completing my 1982 Topps set build. A comment from Fuji alerted me to an incoming PWE. Fuji's one of the best in the blogging business: great posts, terrific reader engagement, and I think he easily takes home the award for most comments left within out little corner of the blogosphere. 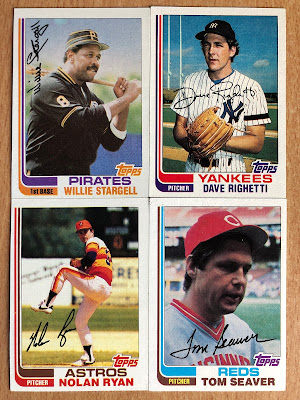 I believe the Righetti and Ryan cards are from spring training.
In Action cards. 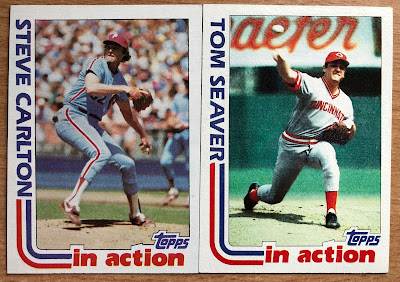 I never really understood the purpose of the "In Action" subset. I guess it was Topps way of putting more star power into the set rather than cards of backup catchers and the fifth guy out of the bullpen.
All-Stars! 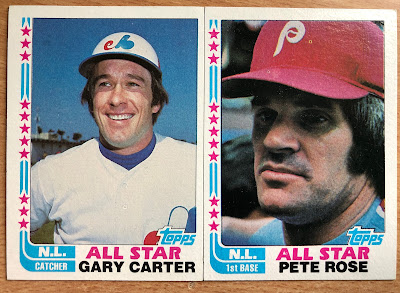 I think these are pretty glorious.  I love Carter's Les Expos catching helmet and Rose's five o'clock shadow is quote stellar in its own right.
Future Stars and Stolen Base Leaders. 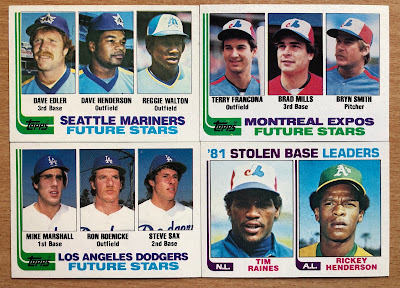 Best career on each Future Stars card: Steve Henderson, Bryn Smith and Steve Sax.  Also, I miss the stolen base. We attempted 104 steals at the sophomore level in 22 games this past season. For what it's worth, my players had the green light to steal if their twelve foot lead time to second base was quicker than the pitcher's time to home plus the catcher's pop-to-pop time. We worked on the finer points like looking for pick-off tells, tendencies and timing. We taught them to take advantage of those who haven't learned a slide step yet and also those who would only throw one look at the runner before going home. We were thrown out quite a bit early on, but my guys got better at picking their moments during the course of the season. We were successful at a 79% clip over the course of our abbreviated season. Hopefully they learned a few things that can help them out as a varsity player next spring.
Will we ever see guys like Tim Raines and Rickey Henderson again?
After my recent card show and Fuji's generosity I'm only one 4-card Sportlots PWE away from putting this set to bed. Those cards should be here early this coming week.
Fuji, thanks for taking the time to go through my want list and sending these wonderful 1982s my way. It's very much appreciated!
Posted by P-town Tom at 6/12/2021 01:49:00 PM