The SPs That Got Away

My last post looked back at the Cubs' drafts international signings since 1995. In short, the Cubs have been downright awful at developing starting pitching through their minor league system, especially if one considers Kerry Wood (joined the organization in 1995), Carlos Zambrano ('97), and Mark Prior ('01) to be the last three big impact arms to come up through the system.

My favorite Bleacher Tweeter had me pondering after a comment:

PKS, good question. I could name a few off the top of my head, but I had largely forgotten most from this list.

To qualify for the discussion, a pitcher must have had 20+ starts during one season. The last post revealed just seven players who had done this with the Cubs from the 1995 draft to present. What about the ones who got away? 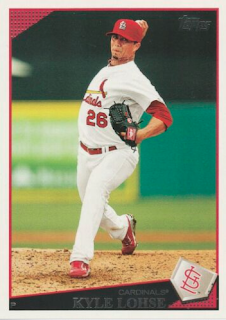 I always forget Lohse was drafted by the Cubs. He is probably the most accomplished pitcher on this list, but I'll let you be the judge. His career record was 147-143 with a 4.40 ERA and he made 418 starts during his 16 year career. Lohse was part of a 2-for-2 deal with the Twins in 1999 that brought the Cubs Rick Aguilera.
Verdict: Lohse was a 29th round draft in Single-A when this trade happened. Anytime you can get an established bullpen arm for a lottery ticket I think you have to take it. I would say the Twins won this trade, because the Cubs didn't go anywhere with Aguilera and he retired after the 2000 season. 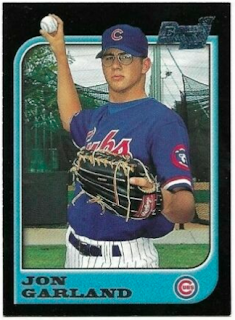 Jon Garland was traded to the White Sox during the Cubs' playoff push in 1998 for reliever Matt Karchner, who posted a 5.14 ERA after the trade. The Cubs made it to the post season for the first time since 1984 (despite Karchner), but the White Sox found themselves a fixture for their rotation. In all, Garland went 136-125 with an ERA of 4.37 and 342 starts during his thirteen year career.
Verdict: Big L for the Cubs here. Maybe one of the top five most regrettable trades in Chicago Cubs history? 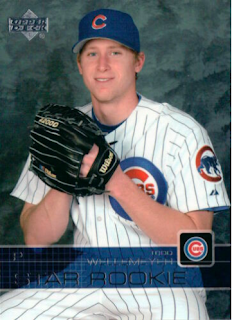 Wellemeyer didn't become a started until his fifth MLB season, and then had 53 starts for the Cardinals in two years toward the tail end of his career. Overall, he finished his career a 32-34 record, a 4.83 ERA, and 75 starts. Wellemeyer was sent to the Marlins in 2006 for two minor league pitchers who never became much.
Verdict: Wellemeyer had a 6.19 ERA in three seasons as a reliever before being traded. The Cubs gambled on their return, a former 7th rounder and 11th rounder, but neither panned out. The Cardinals found gold with Wellemeyer in 2008, but I don't think anyone would have predicted that. This one is a draw for me. 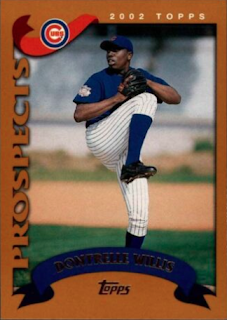 Willis, and three other players, were traded to the Marlins in 2002 for Antonio Alfonseca and Matt Clement. Willis made his MLB debut the next season and rattled off 162 started in five years. He finished his career with a 4.17 ERA and 72 wins to 69 losses.
Verdict: Willis was electric and all of baseball was watching his smile and crazy windup when he burst on the season as a 21-year-old in 2003. Clement and Alfonseca helped the Cubs to the playoffs in 2003, and Clement gave the Cubs the three best seasons of his career. I'll give a slight edge to the Marlins on this one, but only because Willis was making league minimum and Clement was in his arbitration eligible years. 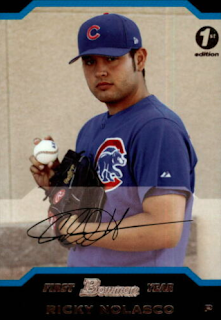 Nolasco started 312 games in his twelve year career. During that time he posted a 4.56 ERA and had a career record of 114 wins and 118 losses. Nolasco was packaged with two other young arms, in 2005, for the Marlins' Juan Pierre.
Verdict: Juan Pierre spent one season of his prime atop the Cubs batting order before signing a free agent deal with the Dodgers the next winter. The Cubs finished 6th in the old NL Central and didn't need to lose an arm like Nolasco for one year of Pierre. The Marlins won this deal. 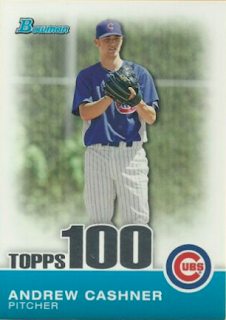 Cashner has a 57-87 win-loss record in 188 starts, with a 4.10 ERA for six teams in his career. He has spent more than his fair share of time on the injured list. He netted the Cubs Anthony Rizzo in a 2-for-2 trade in January of 2012.
Verdict: There was lots of debate around this trade when it was completed. I'm a pitching guy and I wasn't sold on the move by Theo Epstein at the time. Fast forward eight seasons and a World Series Championship later and I think it's easy to say the Cubs made the right call on this deal! 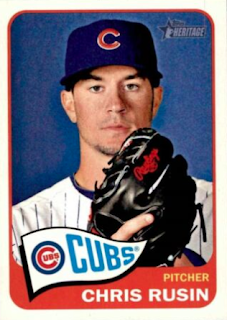 Rusin made 22 starts for the Rockies in 2015 and like most Rockies pitchers he did not fair well. Colorado claimed Rusin off waivers from the Cubs in 2014.
Verdict: Losing a young lefty arm to waivers?  Hmmm.  Rusin has pitched in part of eight seasons and has a career 4.62 ERA. Meh. I can live with this. 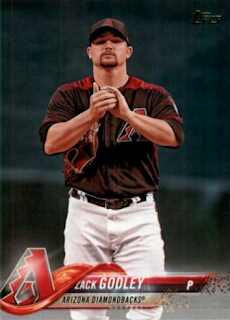 In 2017 Godley had 25 starts for the Diamondbacks and posted a 3.37 ERA. Hey, that's pretty good! The next season he made 32 starts to the tune of a 4.74 ERA. Not great. Godley was packaged with another minor leaguer to land the Cubs Miguel Montero in 2014.
Verdict: Godley had a real nice 2017 and Montero gave the Cubs an insurance run (which they needed) in the 10th inning of Game 7 of the World Series. The edge goes to the Cubs on this one. 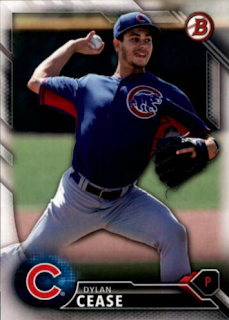 Cease, once considered a 1st round talent out of high school, slipped to the 6th round in the draft because of Tommy John Surgery. The Cubs helped him rehab, and babied his arm for a couple of years, and then sent him and Eloy Jimenez to the White Sox for Jose Quintana in 2017. Cease had his first crack at pitching in the big leagues last season and made fourteen starts. I think he'll easily top 20 this coming season.
Verdict: I did not like this trade for the Cubs in 2017 and I don't like it even more now. Eloy is going to be a stud and I still think Cease is the best arm Theo Epstein's front office has drafted during his tenure. Quintana has been a solid starter, but quite unspectacular during his stay on the north side.

In summary, the Cubs have traded away more pitching prospects (8) in the last 25 years who have become serviceable starters than they have brought to the majors (7). Dylan Cease could easily be the 9th pitcher to make the discussion a little bit more lopsided. In all, I think the Cubs did pretty average in the trades above. They lost a few (Lohse, Garland & Nolasco), but they also won a couple (Rizzo & Montero), and then there were a couple that didn't amount to much.

When it's all said and done . . . #tinstaapp. There is no such thing as a pitching prospect.