Cards from Dad, Part I

My parents live about twenty minutes away and I try to get over there when I can. My mom is very crafty and has been creating some wonderful stained glass pieces. My dad, who is also good with his hands, can usually be found down in his workshop tinkering with something mechanical. Usually, he's repairing lawnmowers, but lately he's begun overhauling a 1974 Chevy pick-up truck. Together they are quite the team, one that I have looked up to for a long, long time.

Usually before I go home I'm gifted with a newspaper clipping my mom saved for me, or maybe some leftovers, or the random piece of mail addressed to me at their address. This past time I was shocked to receive a box of cards from my dad. 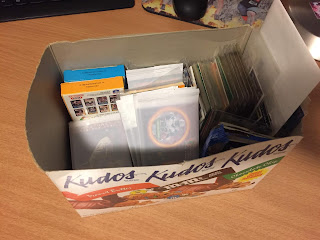 I went through the box last weekend and have divided the contents into three separate posts, including a Pack War post!

Up first are a couple of pogs from a 1995 Tombstone Pizza promotion. Pogs? I barely remember those! The checklist for this set is pretty stout, and I was gifted a couple of winners with Dan Marino and Emmitt Smith. 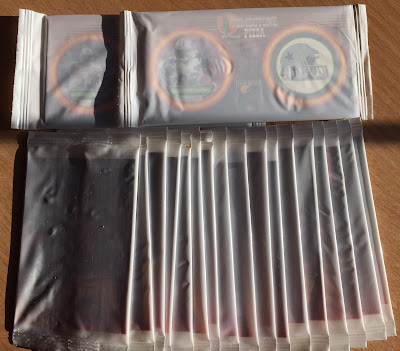 The bottom row is a bunch of cards from the 1995 Tombstone Classic Quarterbacks set of twelve cards. My dad came three cards away from completing the set, which is pretty impressive!

Here's some more random freebies. The top card is from Upper Deck's 1993 Super Bowl Showdown Series. I believe this was a Miller Lite promotion. The Emerson Fittipaldi is from the 1994 Indianapolis Motor Speedway Champions Collection. 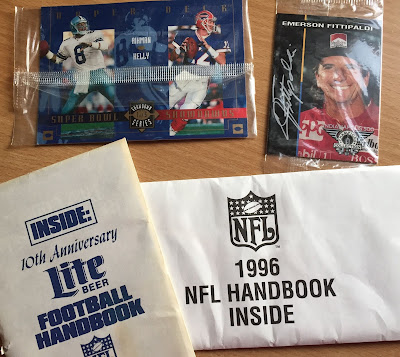 The bottom row has a couple of Miller Lite's NFL Handbooks, which could be found in cases of beer if I recall correctly.

More pizza cards!  Actually, that's the complete 1994 set on the left and an extra Robin Yount on the right. 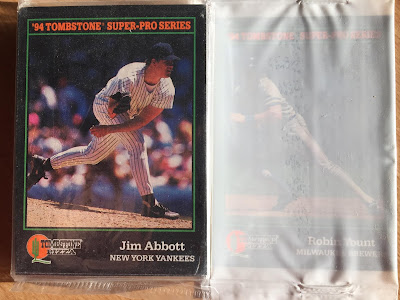 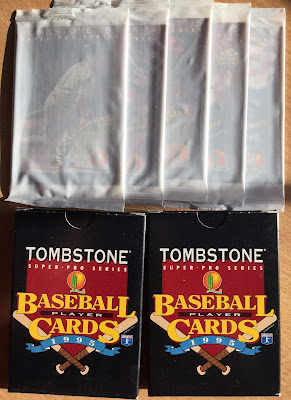 These are awesome! The 1994 AL and NL Kraft Singles Superstars sets from 1994: 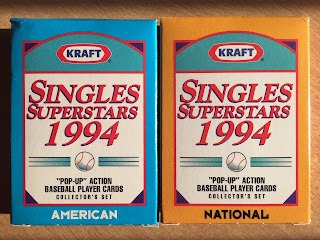 The cards look like a traditional card at first glance, but they have a "pull" tab which allows them "pop-up."

Here are some loose cards that don't really fit his collection or mine. On the left is 1988 team set from Donruss' Baseball's Best set. 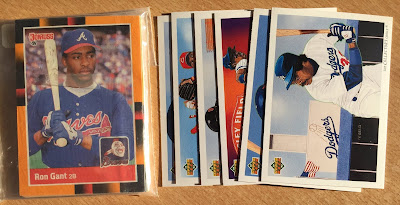 I always enjoyed Upper Deck's team checklists. I guess my dad liked them, too!

Here's a head-shaker: three 1991 Panini stickers. Dale Murphy is a decent name. All three will go into my team boxes for future PWE mailings. 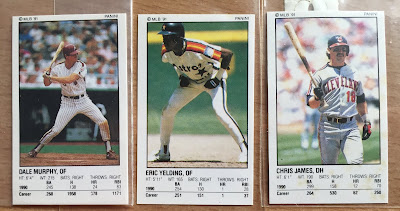 A Steve Ellsworth in-person (IP) autograph. I already had one of these in my collection and now I have two! 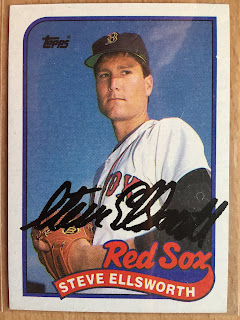 I think my mom met Mr. Ellsworth during one of her work trips and brought these back for us. 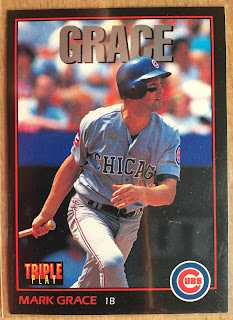 A Cub to end the post! Triple Play was a fun set geared toward kids, and I liked Donruss' effort in the 90's much better than what Panini gave us earlier this decade. This Mark Grace will fill a hole in my Cubs team boxes.