Game 163 will played today between the Rangers and Rays to determine who will advance to play in the one game Wild Card match up versus the Cleveland Indians.

This blog post will detail how the teams did in games that I attended this season, but before we look at my regular season record, how about those Indians?  In 2012 their record was a shaky 68 wins and 94 losses.  This year they pulled off quite a turnaround: 92 wins and 70 losses. 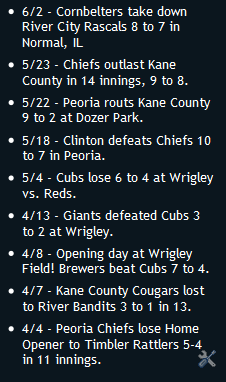 I saw 1 Cubs win at Wrigley Field out of 4 contests.  The other MLB game was this past weekend in St. Louis where I witnessed the Cardinals beat the bologna out of my Cubs.

Speaking of Cardinals and Cubs...
The Peoria Chiefs, a Cardinals' affiliate and my local team, won 6 games and lost only 3 in games that I saw at Dozer Park.
I saw the Kane County Cougars, a Cubs' affiliate, play seven games.  I love my Cougars and didn't mind traveling  to see them. They had 1 win in four attempts in Peoria, lost one game in the Quad Cities, and lost both of the games I attended in Kane County.

The Normal Cornbelters and Omaha Storm Chasers each won their respective home games that I attended.

Overall, the home team had a record of 11 wins and 8 losses in the 19 games I witnessed live.

Why am I a Cubs fan again?  Sheesh.

With a short summer this year I think nineteen games was a pretty good tally.  Hopefully I'll be able to see a couple of new MLB ballparks next year and I can inch closer to my goal of seeing all thirty beautiful parks.

As always, I'll be Waiting 'til Next Year...  perhaps I'll see this fly a few more times next year? 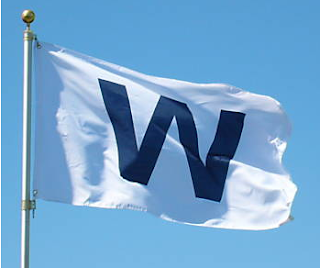