Poof! A Pair of Penguins Perching off the Porch!

Went to Home Depot the other day and what did I find?  There was one last inflatable penguin sitting on the shelves!  Paco, coincidentally, was also the last penguin of his colony.  So, I swept in and swooped this little guy up.  Why wouldn't Paco want a little friend? 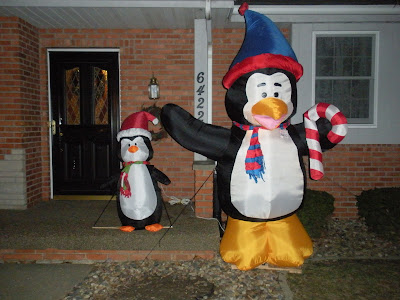 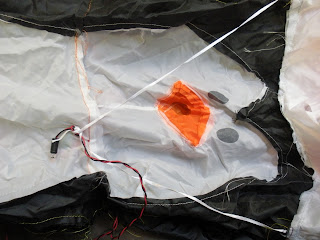 I got him home and found that he had been previously opened/owned.  I plugged him and up he went without any hesitation at all, as if to say, "Thanks for freeing me!"  I dimmed the lights, and notice my penguin was also a little dim upstairs.

Seriously, there were five LED lights dangling about on the inside of our new penguin, but none were higher than his neckline.  His torso was well illuminated, but his little face was dark as can be.  The previous owner must have found this unacceptable, and took him back.  Home Depot probably threw him back on the shelves after investigating and finding all lights to be operational.

I, my friends, am not so easily deterred!  I will save this penguin!

The picture shows the little guy momentarily turned inside-out.  I performed a little open-penguin surgery and I rigged the white rope so that the top light will reside at penguin eye-level.  He made it through surgery and rehab without any setbacks.  He's a bright little guy now!

I created a little "perch" for the little guy to sit upon, because it's tremendously difficult to pound stakes into the ground this time of year.

And presto!  Another perching penguin to join Paco!