Get out of my bird feeder AND... 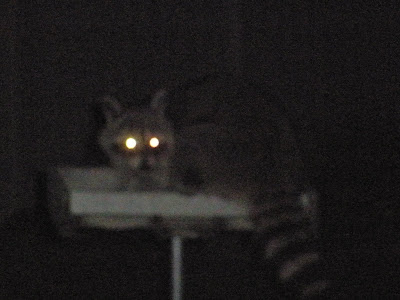 This fat guy has been eating the bird feed that I put out.  That's not the worst of it though... get this... he then grabs his favorite newspaper, a can of air freshener, and retires to our roof to take care of his business.

Look, I can deal with him stealing the bird food, but seriously, don't use my roof as a toilet!

It was time for action.  We quietly opened the sliding door and Laura took the picture.  I took a step out onto the patio and as he was climbing down our tray feeder I pegged him with a baseball.  Square in the back!  But, it wasn't a full windup.  It was more of what I like to call a "dart throw".  Accurate for sure, but not much velocity behind it; just like trying to hit the bull's eye.  He then started to make a break for the big oak trees adjacent to our garage and I let a fastball rip.  I think I hit the fence... it was loud... but definitely not the thud I was hoping for.

Oh, no worries. Two summers ago it was Tom vs. the Chipmunks.  This year, the sequel: Tom vs. the Racoon.