Zippy Zappy Pack Wars were put front and center as I put the blog on autopilot for about ten days. During that time my wife and I added over 2,300 miles and two tires to her car. Somewhere in the middle of Kentucky one of her tires became "out of round" and it felt like we were in the middle of an unbalanced spin cycle on the washing machine. We stopped in Asheville, North Carolina and a Hyundai dealership took real good care of us. Honestly, that was the worst thing during our trip, which really wasn't that bad at all.

There were tons of positives, but I'll keep it to three groupings: activities, food, and baseball cards. If you have the time let me give you a pictorial summary of our trip! 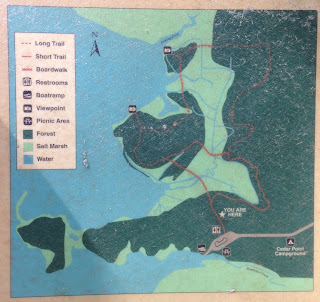 This trail was easily the best manicured, most interesting, and least buggiest of all the trails we sought out. It's located right along the inter-coastal waterway in North Carolina. We did a couple parts of the trail twice and easily put in three or four miles. It was fun to explore and watch the fiddler crabs.

The picture on the left shows the waterways when the tide was out. 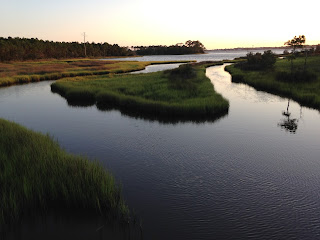 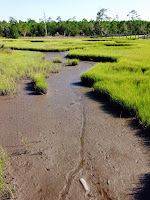 The one on the right shows an example of a similar waterway once the tide came back in. Such a vast difference.

#2: Attending the Tennessee Smokies Game
Laura, my beautiful wife, loves to make me happy. Check out the view from out hotel room: 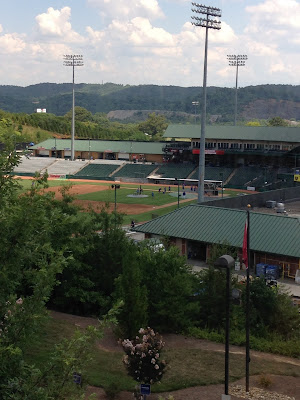 Yep, I was able to watch the AA affiliate of the Cubs take batting practice from the comfort of our air conditioned hotel room.  How sweet is that?  The Smokies lost the game 5 to 3, denying the Rally Llama and all of his good mojo. 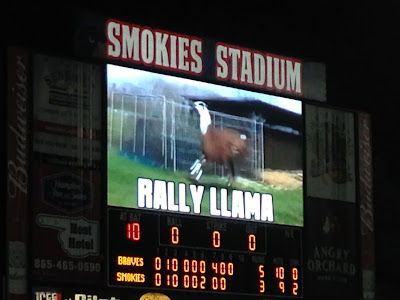 #3: The Escape Room
While in Charlotte our friends, Mike and Rhonda, took us to an Escape Room. This was completely new to us, but it seems to be a big thing on the east coast in the major cities.
In short, you're locked in a room for one hour and must find clues and solve puzzles to unlock a multitude of locks. Once we unlocked the first door there was a second room with more riddles. It was fun, a little stressful, but definitely exciting! If you live near a big city you might be able to try one. Just google "escape room" and see what pops up. 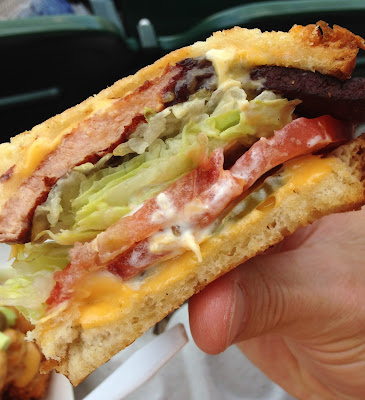 Holy cow!  What a great tasting sandwich!  This was what I decided on for dinner at the Smokies game and it was so good I may try to re-create it in my own kitchen! 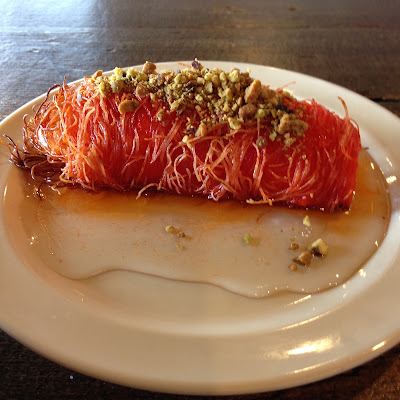 Up until this point, the only Greek dessert I've tried is baklava. And really, who needs anything else? It is soooo good. But, my wife ordered something different and I'm so glad she did. It was a little challenging to eat with a fork, but so very tasty!

I love me some pizza and for a second time Laura and I were not disappointed at the Mellow Mushroom. This eclectically decorated restaurant offers plenty to look at while you wait for your order of deliciousness to be baked and delivered. We would go back . . . again . . . and again . . .

Top Three Baseball Card Purchases
#1:Lew's Rod & Reel
I found this card shop on-line before we started our trip. It's located deep in the heart of the Croatan National Forrest and it easily had the most diverse offerings I've ever seen for a card shop... um, I mean, fishing depot . . . no, no, no... sushi restaurant. 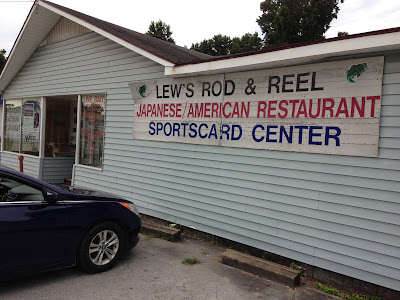 The shop was nothing like I had seen before. The first half of the store was all fishing equipment, but turn the corner and there were some metal shelves with monster boxes on them and glass cases with cards. In the far back portion of the store there were tables and chairs for the restaurant. 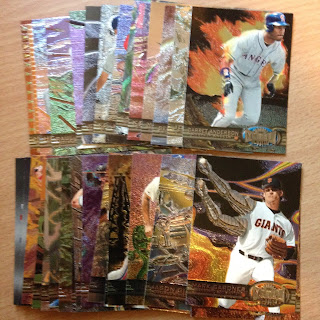 I don't fish, and I stopped in after lunchtime serving hours, but I did walk out with thirty singles for my 1997 Metal Universe set build. The owner, Lewis, was going to give them to me for free, because I guess he doesn't run into many set builders and he just wanted to help me out. I refused and gave him all the paper money in my wallet (four bucks) and he gave me half of it back. Cool. Two dollars? Sold! 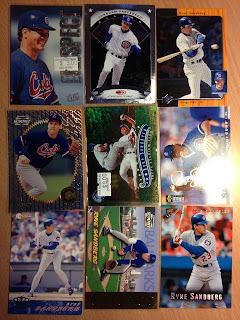 As odd as an experience Lew's was, AAA Collectibles was everything I picture in a LCS. Glass cases of high-end cards, a bin of discounted autos and relics, a nice selection of packs to purchase, well organized, and a very knowledgeable husband and wife tandem ownership. The wife was upstairs sorting cards and the husband chatted up the customers.

The length of one entire wall, up to about three feet high, was covered in 800-count boxes with labels on them. Some had singles, dating back to the 1950's and others had a simple letter of the alphabet on them. I asked for the S boxes, but only had time to sift threw three of the seven. I pulled a dozen or Ryne Sandberg cards, and I feared the worst when a couple of selections had prices of $9 and $3 on the sleeves. The owner assured me that wouldn't be the price any longer... Each of the Sandberg cards cost me about a quarter on average. Score!

#3: Tennessee Smokies Team Sets
Discounted team sets of baby Cubs?  Sign me up!  My favorite was finding a 2 for $1 special on the concourse during the game which netted me a pair of 2009 team sets. 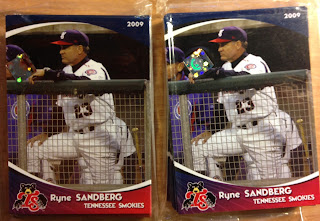 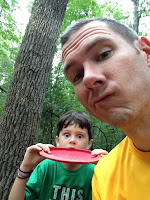 One for my Sandberg collection and one to keep in the wrapper!

It was really nice to get away. Summer baseball just ended and the fall softball season I coach starts in two days. Squeezing in a vacation between coaching duties was just what was needed. I was able to enjoy the outdoors, even though I wasn't on the baseball or softball fields, as we rented stand up paddleboards and kayaks in Swansboro, NC.  While in Charlotte we squeezed in a round of disc golf, and Mike's seven year old son tossed one in from about sixty-five feet. Pretty amazing. 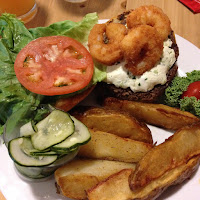 We ate out a bunch, but we only ate at one national chain the entire trip. I tried lots of new food, and probably should have made the food listing at least five deep as it was difficult leaving off the milkshake from Cookout and the surf and turf burger from the Swansboro Food and Beverage Company. That's right, shrimp and jalapeno cream cheese on a burger. Mmmmm...

When we returned home I found one of our neighbors mowed our yard AND get this... our cats actually seemed interested in us being home. That never happens.

That should just about do it as far as wrapping up our trip goes. Now I have some unwrapping to do, in the form of five trade packages. Stay tuned, my loyal readers, because I have plenty of baseball card blogging material sitting on my desk!  Thanks for reading!
Posted by P-town Tom at 7/23/2016 07:07:00 PM