Welcome back. Today we'll take a look at the cards in the top loaders within the latest Zippy Zapping.

Sometimes ZZ puts cards of this caliber in his repacks, which always use in pack wars. But let's be honest here, no card I could pull from a retail pack could ever beat any of these and their high level of mojo. You'll see what I mean in a second.

First up we have a nice Arismendy Alcantara certified autograph. 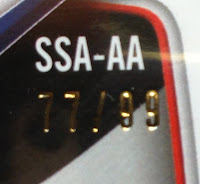 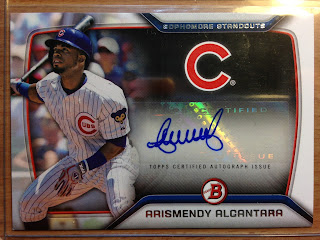 It's numbered to 99 and is a really well done card. Mendy was shipped to Oakland last month when the Cubs reattained Chris Coghlan's contract. As an Athletic he's gone 2-8 at the plate with four strikeouts as of this writing. Good look in Oakland, Mendy!

Next up is Jason Hammel! What a sharp looking card! 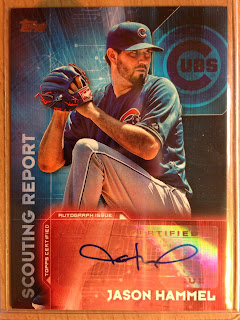 Hammel has been one of my favorite Cubs. He doesn't blow guys away with his stuff, but instead he pitches. I enjoy watching a guy work his craft.

Talk about being crafty! Pat Venditte is all kinds of resourceful by not only using different arm angles, but different arms. 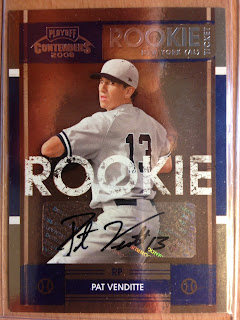 I've been following Venditte's career since he played for Creighton University. He's done really well in AAA this year, but has struggled a bit in Toronto when given the chance. It's really cool to have an autograph of his. He worked at a winter baseball camp in P-town I attended about six months ago and he is a really good guy.

I saw Carson Sands pitch in South Bend during my recent trip to Indiana. He didn't fair too well that day, but I think he's got the athleticism and arsenal to make it to the big leagues. He, Dylan Cease and Justin Steele are all guys drafted in 2014 who should make an impact on the pitching staff in Chicago some day. 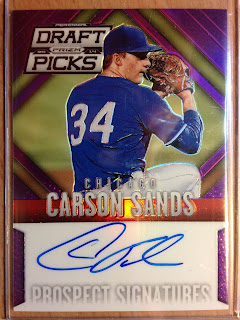 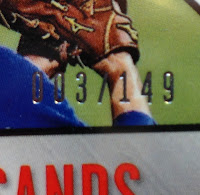 This purple parallel is numbered to 149 and will go really well with the base version already in my collection.

Nice!  I've been silently stalking this exact card on Ebay for a while now, but I never pulled the trigger. 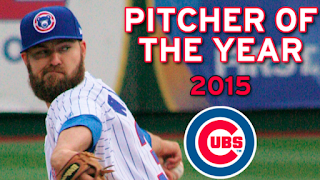 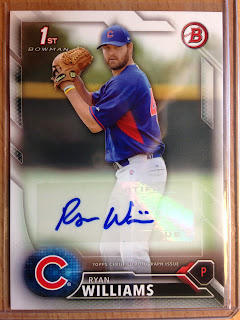 I guess patience pays off!  Williams was the Cubs minor league pitcher of the year in 2015.  AND, he now has the best beard in the Cubs organization next to Jake Arrieta.

BOOM! The VOGELMONSTER!  This one is officially called a Japan Fractor and it's number 28/35. 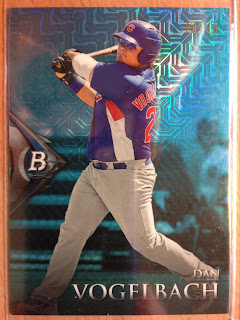 Zippy Zappy tipped me off on Twitter a while ago that this card was coming and it prompted me to go out and pick a number of other 2014 Bowman Platinum parallel cards.  I'm still chasing the red and the orange, but they aren't the cheapest and I'll probably be patient for a little while longer on those two. The Japan fractor is a beautiful color, I love the design of the pattern, and of the 57 cards in my Vogelbach PC, this one is my second favorite right behind the in-person auto he granted me this past January.

A Japan fractor . . . I'm still in awe. Isn't that pretty cool?!?  Thanks for the handful of autographed cards and that awesome VOGELMONSER, Zippy Zappy!