Card and a Clipping from Mom

Yesterday was my parents' Fireworks Extravaganza and it was a blast as usual. (See what I did there?) A nice collection of family and friends gathered to indulge in burgers and hot dogs from the grill, watermelon, deviled eggs, my sister's fantastic guacamole, pie and cookie cake! We played some frisbee golf, ladder golf, and we even had a nice bags tournament that involved nearly everyone. As dusk approached we started lighting off the fireworks and we drew quite a crowd from the neighborhood before it was all said and done. I'm happy to report that I have all my digits still attached!

Earlier in the day my mom handed me a newspaper clipping and a yellow padded envelope. Needless to say, I was pretty curious! 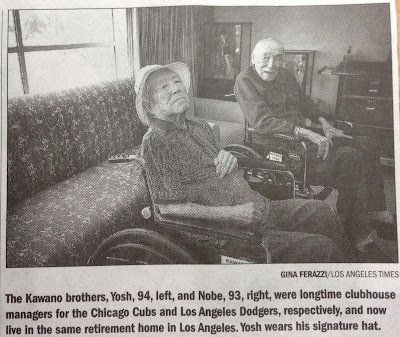 The clipping was the abridged version of an article I read on the LA Times' webpage in late June. The lead pictures were the same, but the Peoria Journal Star's article didn't print much of the original material on Kobe Kawano. Kobe worked for the Dodgers and I suppose the PJS didn't think it's readership would take much an interest in him.

The Kawano brothers, Yosh and Kobe, were both clubhouse managers in MLB for several decades. In fact, Yosh didn't retire until 2008, at the age of 88, after working fifty-five years in the position.

I remember seeing Yosh and his omnipresent floppy hat getting screen time during Cubs games on WGN when I was growing up. If I remember correctly, Harry Caray and Steve Stone would manage to work him into a telecast a couple of times a month. The LA Times confirmed what I had already surmised: Yosh was pretty popular with everyone in the Cubs family.

The article is a fun and quick read and I would suggest checking it out if you have the time this weekend. In the meantime, allow me to borrow an anecdote to tease you into clicking for more:

One time, Yosh followed a young sportswriter outside as the Cubs took batting practice. A grounder bounced their way and the reporter scooped it up, tossing it to a boy in the stands.
“Yosh starts chewing him out,” says Ned Colletti, a Dodgers senior advisor who formerly worked in Chicago’s front office. “He was telling the guy, ‘That’s not your baseball. That’s my baseball.’”
The reporter handed over $5. Yosh crumpled the bill and flipped it into the stands, saying: “Now we’re even.”

Ahhh, good stuff! Little stories like these are part of the reason I love the game so much. 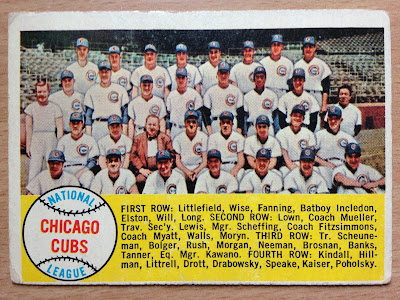 Let's see, there are familiar names there: Ernie Banks, Dale Long, Chuck Tanner and Moe Drabowsky. The 1957 Cubs team wasn't much to right home about, but did you see the last guy on the right in the third row?

Yep, it's Yosh Kawano! I have a card with Yosh!  Score!  This team card will go in my Cubs binder right next to Harry Caray, Steve Stone and Don Zimmer cards.  Thanks, Mom!