Generally, I think those who know me would say I'm a pretty calm individual who could also be described as bit of a people pleaser. A couple of days ago my wife said, "I hope you become more cantankerous as you age." Huh.

While I was on my way back from North Carolina last week the Cubs' front office traded away THE VOGELMONSTER. I was pretty upset at the time, but I mellowed the more I thought about it to the point where I could call it a fair deal. 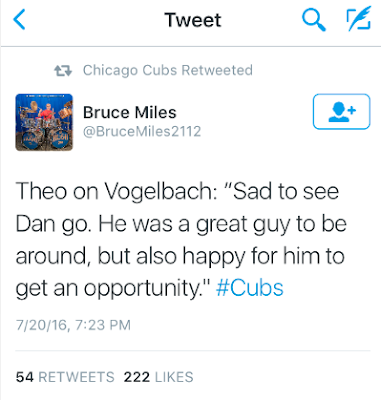 Yes, the unabashed Dan Vogelbach fanboy, P-town Tom, believes the Cubs got fair value for THE VOGELMONSTER in Mike Montgomery, a lefty relief arm. Montgomery, who has been no slouch this season, also has a history of starting and comes with four more years of control after this season. Vogelbach offers a good stick with a patient approach, but he's below average on the bases and in the field. He is stuck defensively at first base and I was not disillusioned to point where I thought he would unseat Anthony Rizzo. Neither was Vogelbach... 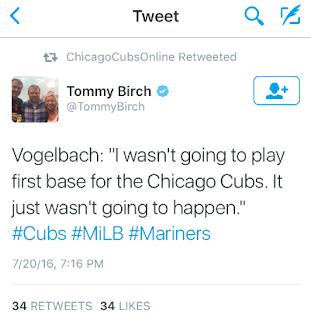 The VOGELMONSTER is in the American League where he belongs. I'm still going to follow his career path and collect his Cubs cards from the last five years, but the jury is still out on whether I'll track down his Mariner cards. I wish him all the luck and I'm glad he's not in the NL where he can potentially terrorize the Cubs on a regular basis. 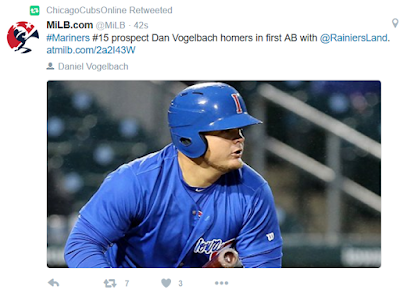 That didn't come off as very cantankerous did it? Like I said before, I've rationalized the loss of Vogelbach and I'm turning the page. Just like how the VOGELMONSTER homered in his first at-bat with his new team. Go get 'em, Dan.

The reason for my cantankerousness? Oh, buckle in fans... it's rant time.

I've been a huge supporter of Theo Epstein and Jed Hoyer since they joined the Cubs in the fall of 2011. In their time here they've made some great moves like trading Scott Feldman for Pedro Strop and Jake Arrieta. They selected Hector Rondon in the Rule V draft in 2012. The two separate trades with the Rangers that brought in Kyle Hendricks, Carl Edwards and Justin Grimm were also pretty nice. Oh, and let's not forget about the one where the Cubs acquired Addison Russell and two other prospects for two months of Jeff Samardzija and Jason Hammel.

They've also made some clunkers. Future All-Star DJ LeMahieu for Ian Stewart? I was on board with the trade at the time, but that one hurts. Signing Edwin Jackson to a $52-million contract for four years? I thought it was a little early in the rebuilding process at the time to add a starter of Jackson's pedigree, but Edwin had potential and it was another move I was okay with back then. Now? The Cubs are still paying him to pitch with his third different team. Ouch.

I wasn't a fan of Jason Heyward deal, but I thought if he does well, brings a championship to Chicago, AND opts out of his contract, then I would be okay with the signing. As it looks right now, he's not performing well, he won't opt out, and the contract is going to be an albatross down the road. It's still early and he can still turn things around. Here's to hoping he does.

Things have been different since the Cubs signed Ben Zobrist, John Lackey and Heyward. I didn't expect the Cubs, who were once in cost controlled talent acquisition mode, to go the in-house route forever.  But, I also didn't expect this front office to be on the other side of the table in an Addison Russell type deal.

How'd that work out for the Athletics again? Hmmm... Russell is the Cubs starting shortstop, the Athletics were ousted from the wild-card game, Samardzija played all of sixteen games for the A's, and Jason Hammel is eating potato chips in the Cubs dugout. Yeah, it was a gutsy move by Billy Beane to go all in for a championship, but in the end it looks like he got fleeced. 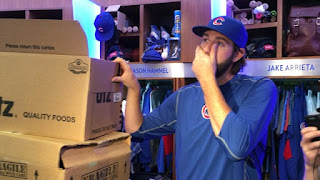 Things that bother me about the Chapman trade:
1) The clubhouse chemistry of the Cubs was really, really good. How can bringing Chapman on board not ruffle some feathers? As Tony Burbs pointed out, in his fine post, Chapman has a history with Anthony Rizzo.

Really? What did you expect Rizzo to say with a microphone in his face?

2) The whole domestic violence issue. The charges were dropped, because the stories of what really happened kept changing, but it was clear something happened between Chapman and the mother of his child. There was a gun being fired, she "fell" down, and as a result Chapman was the first one to test out the new Domestic Violence Policy set forth by MLB. Chapman comes with serious question marks. I don't like question marks when discussing the character of the players on the team I cheer for.
Second chances?  Sure, I suppose everyone should get a second chance.

Only time will tell if Theo and company get an "A" for this homework assignment.

3) A rental?  Really? If the Cubs are lucky they get three months of Chapman AND they still have to pay him somewhere in the neighborhood of four million dollars for his services. He can then walk.

The Cubs can't even give the "qualifying offer" to Chapman and get a draft pick out of the deal, because he didn't play the entire season in Chicago.
Maybe Theo has had talks with his agent about a contract extenstion?

4) The price. Ouch.
Adam Warren is an MLB ready arm and is not eligible for free agency until after the 2018 season. I thought Warren could potentially replace Jason Hammel in the rotation next season, but he did not impress during his stay in Chicago. He's not a huge loss to this year's Cub team, but there's certainly still potential in that arm and a couple cost controlled years to boot. If he regains his command he could make this a bad trade for the Cubs all by himself.
Billy McKinney came over with Addison Russell from the Athletics. Some think he is still struggling with a knee injury and others believe he is already reaching his ceiling. I think he's not fast enough to play center and doesn't have a strong enough arm to play right. He's a left fielder in the Jim Eisenreich mold at his best. The Cubs are flush with outfield talent and McKinney isn't a prospect I'm going to lose sleep over.
Rashad Crawford is an uber-athletic center fielder in High-A ball. He bats from the left, can go get get it in center field, can steal a base, but much like Billy Hamilton, he has trouble getting on base. He may still figure it out, but he's a few years away if that's the case. No tears lost here.
Gleyber Torres. I don't know what the MLB Pipeline had him in the Cubs organization, because I don't pay too much attention to that. I read plenty of articles written by prospect pundits and I form my own Top 10 for the Cubs. Torres was my #1.That's really all you need to know.  But . . .
Compare his current season, at age 19 in High-A, to the season Derek Jeter had at the same age in Low-A. Yep.  I went there. I compared him to a 19 year-old Jeter. Will he be the next coming of "The Captain"?  Who knows. But, I have a feeling I'm not going to enjoy watching his career unfold in New York rather than Chicago.

Some may say the path of Torres was blocked by Russell, Bryant, Baez and Zobrist much the same way Rizzo was blocking Vogelbach. Sure, I get the comparison. But how nice would it have been for the Cubs to have a 22 year-old Torres waiting in the wings when Zobrist's contract expires and Russell, Bryant, and Baez are approaching free agency and their first BIG paydays?

Add the four points above together and now you can see why I'm cantankerous. As I said before, I've trusted in Theo, Jed and the process of the rebuild, but now I'm afraid of the direction they have taken. Big contracts with lengthy commitments? Trading talented prospects and years of cost control for a rental with a history of domestic violence? Neither of those are good baseball business in my mind.  But...

I sure hope Theo is right.

The nice thing is the current Cubs seem on board:

Even Hector Rondon, who just lost his closing job, is saying the right things.

I guess time will tell. Three months from now the Cubs could be participating in their first World Series since 1945 and I may be screaming at the TV trying to get Joe Maddon to put Chapman in game. But for right now, this trade just makes me want to scream.

At least I have you guys out there offering support. Thanks, ZZ and TLC.