I Need Advice Before Sending Out My 2nd TTM!

I'm a prospector at heart and my ticker has been put to the task by guys like Lance Dickson, Earl Cunningham, Kevin Orie, Mark Pawelek, Bobby Hill, Luiz Montanez, and Felix Pie.  As many of you know, the Cubs most recently wave of prospects have really begun to take off.  This has been a pleasant change.

I don't have anything against the guys on the big league team, but I guess I'm hung up on the future because the past for the Cubs has been nothing to write home about.  So give me the ROCK SHOULDERS and Vogelmonsters of the MiLB world!

When I do latch on to a big league player it's for good reason I suppose.  Ryne Sandberg and Kerry Wood represent my too biggest player collections, and although they may be modest in size when compared to some others, I am pretty proud of them.

I haven't had a favorite player since Wood retired in 2012.

The 2015 edition of the Cubs have been fun to watch. The team has a charismatic manager, four rookies in the starting lineup, and a nice one-two punch in the starting rotation.  Yet, of all players, David Ross has become my new favorite player. 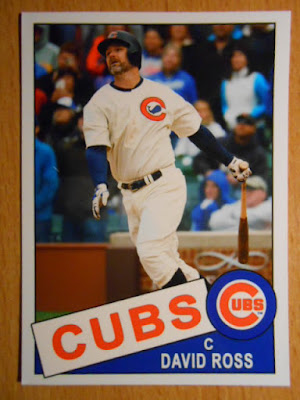 Yes, David Ross.  The same guy who has bounced around the Big Leagues with Dodgers, Pirates, Padres, Reds, Braves, and Red Sox.

Maybe I feel a kinship with him because he's my age and playing the game I love.  Perhaps it is because he's part ballplayer and all fun-loving persona?

I don't know. It doesn't matter.

Many of my other Cubs fans friends didn't like the signing of Ross and they still don't. I'm not proud to say I was in their camp originally, but ole Grey Beard has won me over.  He does all the little things AND is a great leader and clubhouse guy.  Every team needs a David Ross type and I'm glad he's on the Cubs.

Yes, I admit. I have a man crush on David Ross.  In fact, all of the people associated with the Chicago Cubs organization he's on a short list of my favorites:
1. Theo Epstein
2. The Vogelmonster
3. David Ross

Ross may be disappointed to be #3.  But I don't think anyone has any idea how much I respect and admire Theo Epstein nor how much fun I have writing about and following Dan Vogelbach.  Position number three is really a good place to be.

I have in person autographs of both Epstein and the Vogelmonster.  Since I practically swooned when I shook Theo's hand I figured a TTM might be the way to go this time around?

But there was a problem.  Ross is a back up catcher and some may even say he has been the third catcher on the Cubs this year.
Guys like this don't catch the attention of card companies.  Let alone Topps, which seems only interested in producing cards of Kris Bryant and Javier Baez.

I've been following Mark for sometime now, but we never have traded cards until now.  He's a card making wiz and he was generous enough with his time and efforts to make the two David Ross cards in this post for me!  (He will be kindly repaid for said time and efforts with vintage yellow and black cardboard. It has been foretold.)

Now, I want to send a autograph request through the mail (TTM) to one Mr. David Ross.

Epstein is my only other TTM request I've ever attempted.  It was successful, but I'm very much a rookie at this TTM thing.

Help!  I know how to package such a request: one envelope inside another, plenty of postage, card saver, and a nice Please&ThankYou note.

What else can I do?  The end of the season is fast approaching though.  Where do I send it?  Is Wrigley Field my best option?  Is there anything else I can do to help increase the odds of success for my second TTM request?

Oh, sage and wise TTM veterans, please guide me with your words of wisdom in my time of need!