Four more packs and another hit.  Here we go! 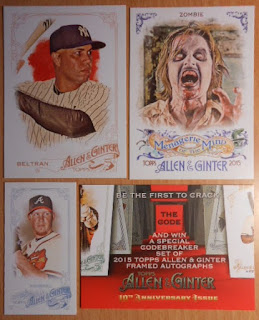 Comments: The Zombie card is now the ugliest piece of cardboard in my collection.  Going back to yesterday, that’s three packs in a row which have lowered my per pack average.  I’m due, baby!  I’m due! 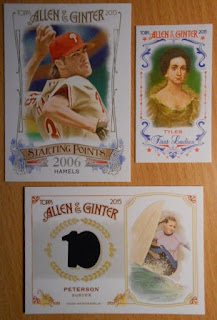 Comments: That was by far the most prolific scoring pack to date. The Lakey Peterson relic has that swimsuit feel to it.  That’s kind of cool. 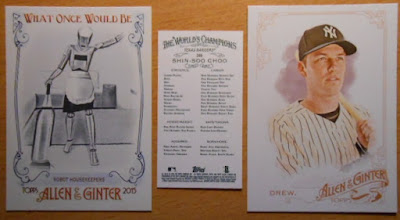 Comments: This is my second SP mini of Choo.  Granted the last one had the A&G back, but I’m not a fan of this.  And no, you won’t get a picture of the Choomongous like I showed last time. Boooo! 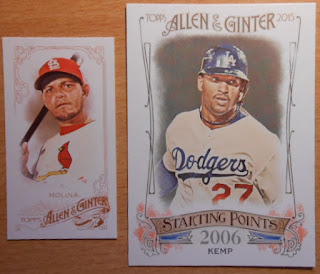 Comments:  So, a Cardinal netted me three points. As a Cub fan, I would like the GAC Rules Committee to consider applying the Yankee Rule to the Cardinals for 2016.  Just sayin’.

I'm halfway through the box, and although I've uncovered two of the three hits there has to me much more good mojo left in this box. Right?  I still haven't seen a 10th Anniversary card or a black bordered mini, plus a plethora of other A&G shenanigans which could pop up.  Good things are still to come!
Posted by P-town Tom at 8/11/2015 04:07:00 PM