I used the "Card Shop Finder" app on my smartphone and it sent me to my first card shop in Mesa: Showtime Sports Cards. I was surprised to see that it's main demographic was the "Magic" crowd and there a couple of tables full of younger individuals moving non-sports cards around and talking about things that seemed unrecognizable.  The stored had plenty of monster boxes of cards to sift through, but they weren't sorted by year, or by set, or by team.  What a nightmare.  I left without making a purchase. 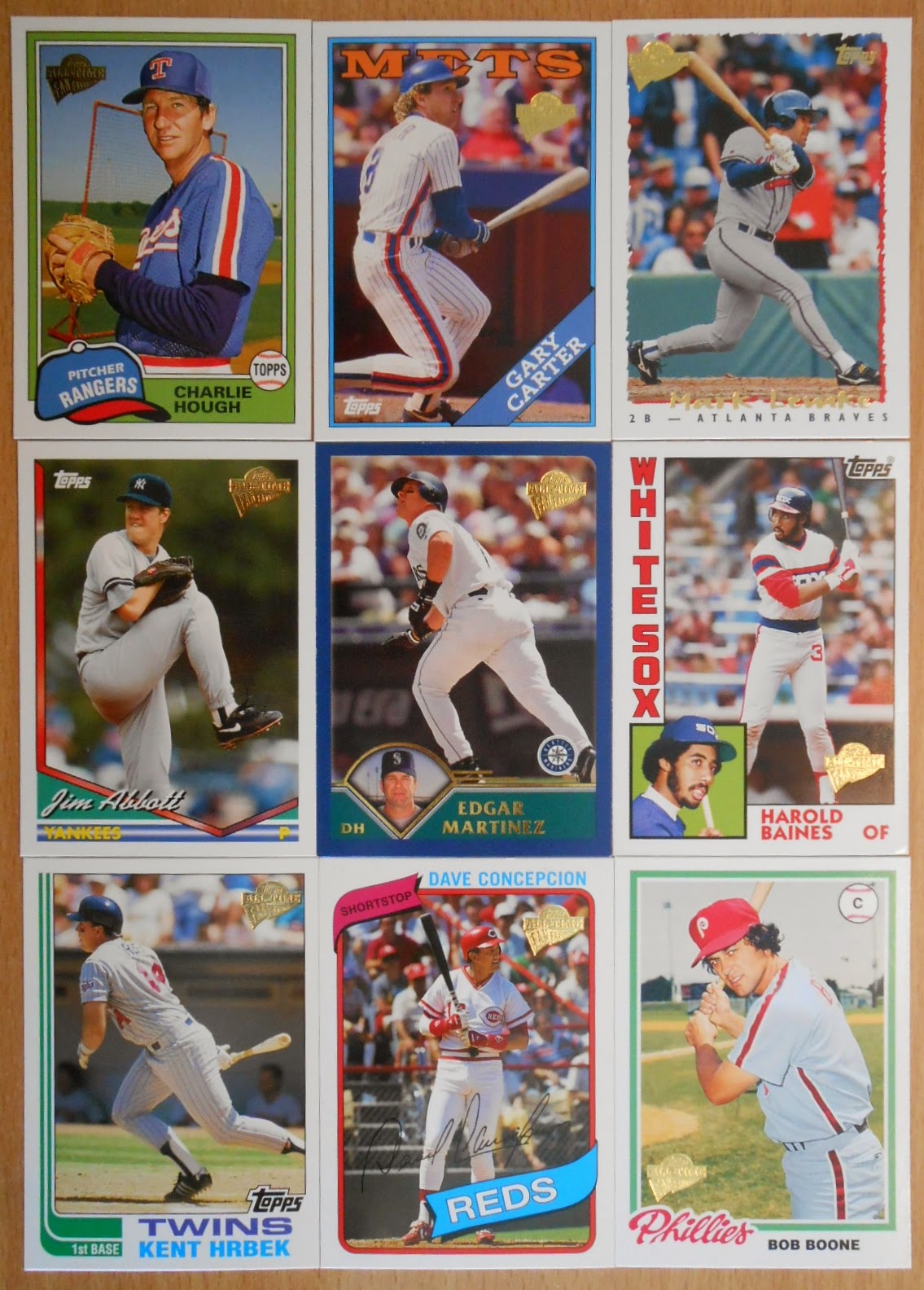 I was not deterred, I contacted Daniel.  We all know Daniel as the guy who's always showing off his terrific D'backs bling.  I figured if anybody within the blogosphere would know where to go he would.  I e-mailed him late that evening and by the next morning I had an e-mail waiting for me.  Clutch.  So clutch.

Since Daniel's favorites were a bit out of the way from where we were staying we headed off for the nearest shop: Hot Corner Sports Card & Memorabilia.  After a twenty-five minute drive while following GPS directions we finally arrived.

I peered into the window and my friend and sister suggested we try another spot.  Man, the next closest spot was NOT close.

"Would it be okay if I lock you in the shop while I go next door?  You can just bang on the wall when you're ready to check out."

Mind?  Holy cow.  This guy doesn't know anything more about us than we're Cubs fans because of our attire.  Baseball card people are pretty awesome.  His shop had a homemade shelving system with about twenty monster boxes settled inside and each read "10 cents each" on the outside.  And, wait for it...  the cards were sorted by year and set.  They weren't collated by number, but it was a HUGE step up from the other place.

I pulled up my wantlist from Google Drive on my smartphone and my sister dug into the monster boxes.  She was very patient and pulled a number of singles I needed for my sets.  What a huge help! Thanks, Jane! 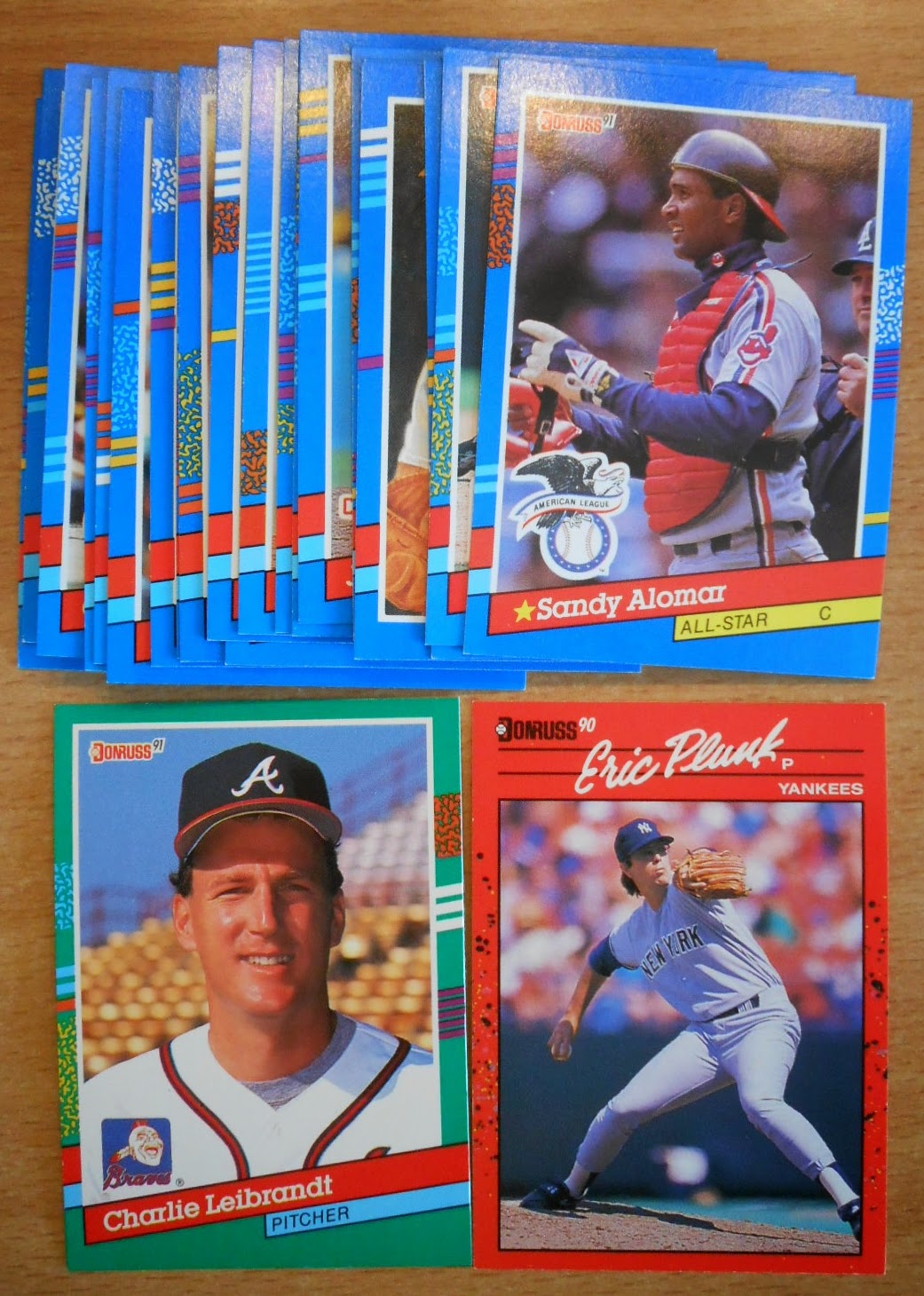 My friend helped with the sets for a little and the perused the rest of the store and eventually bought some vintage cards from the shop owner once he returned.

Meanwhile I looked through each monster box looking for some cool sets.  I'm attracted to sets that feature retired players and I was not disappointed. 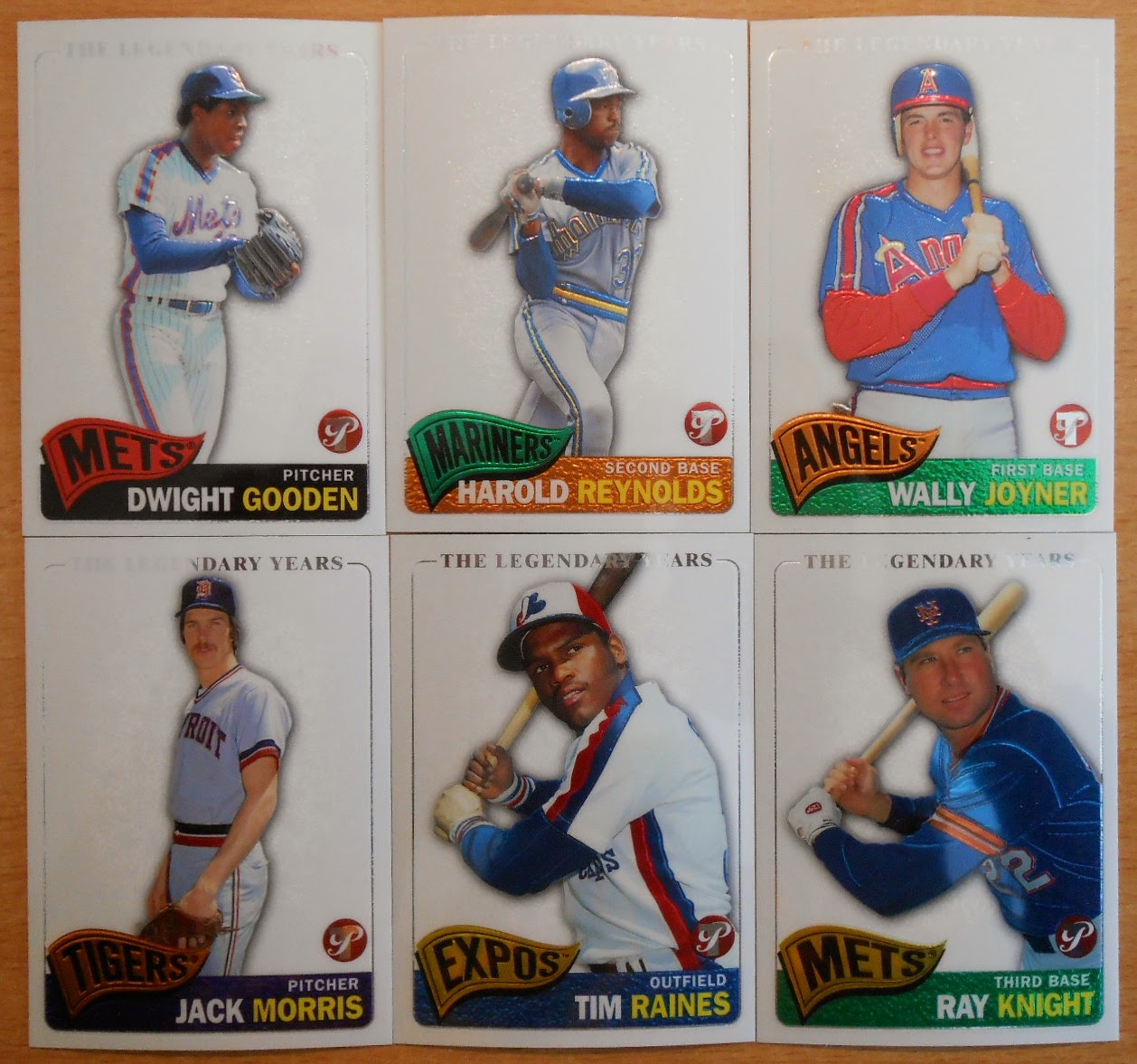 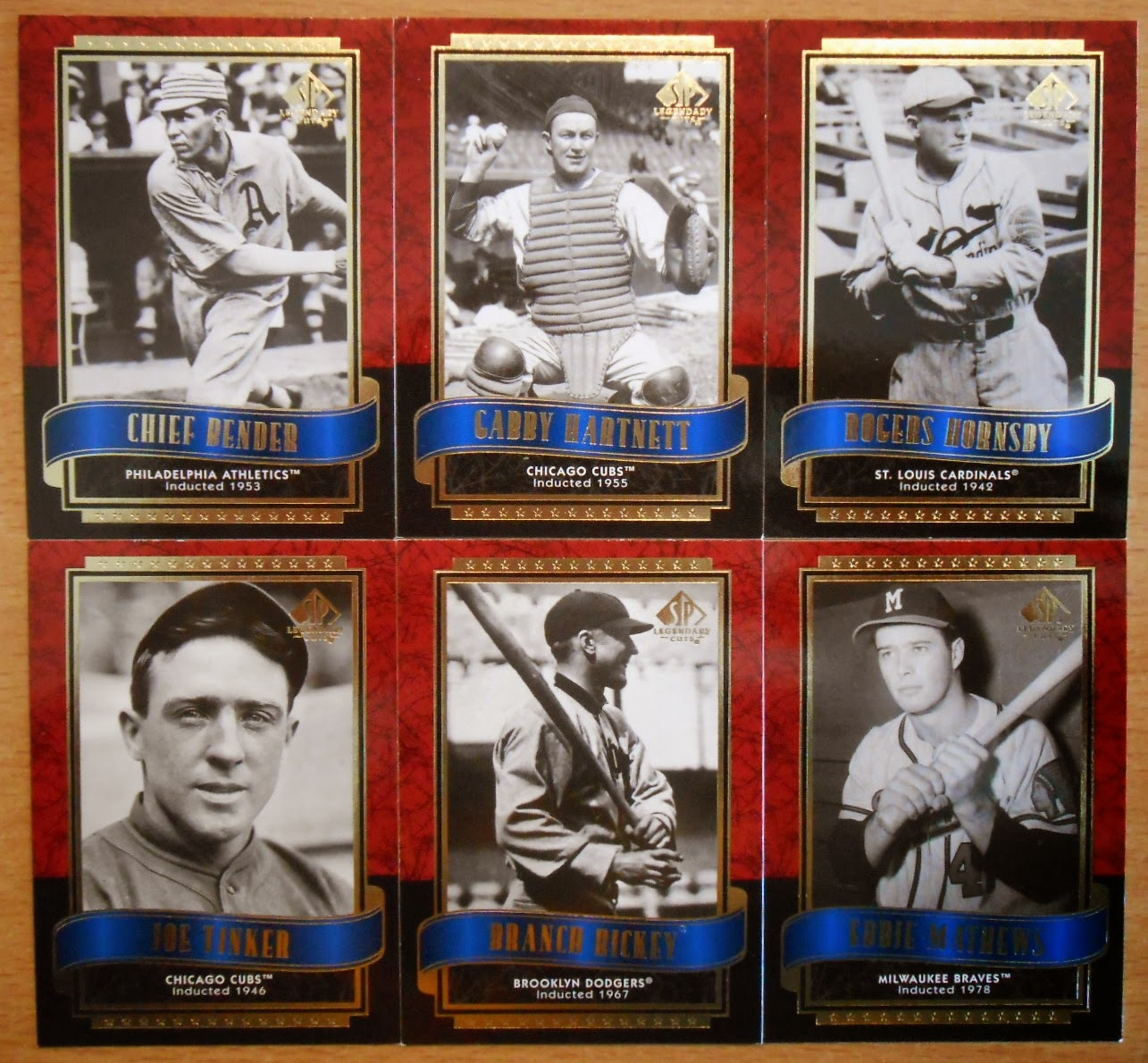 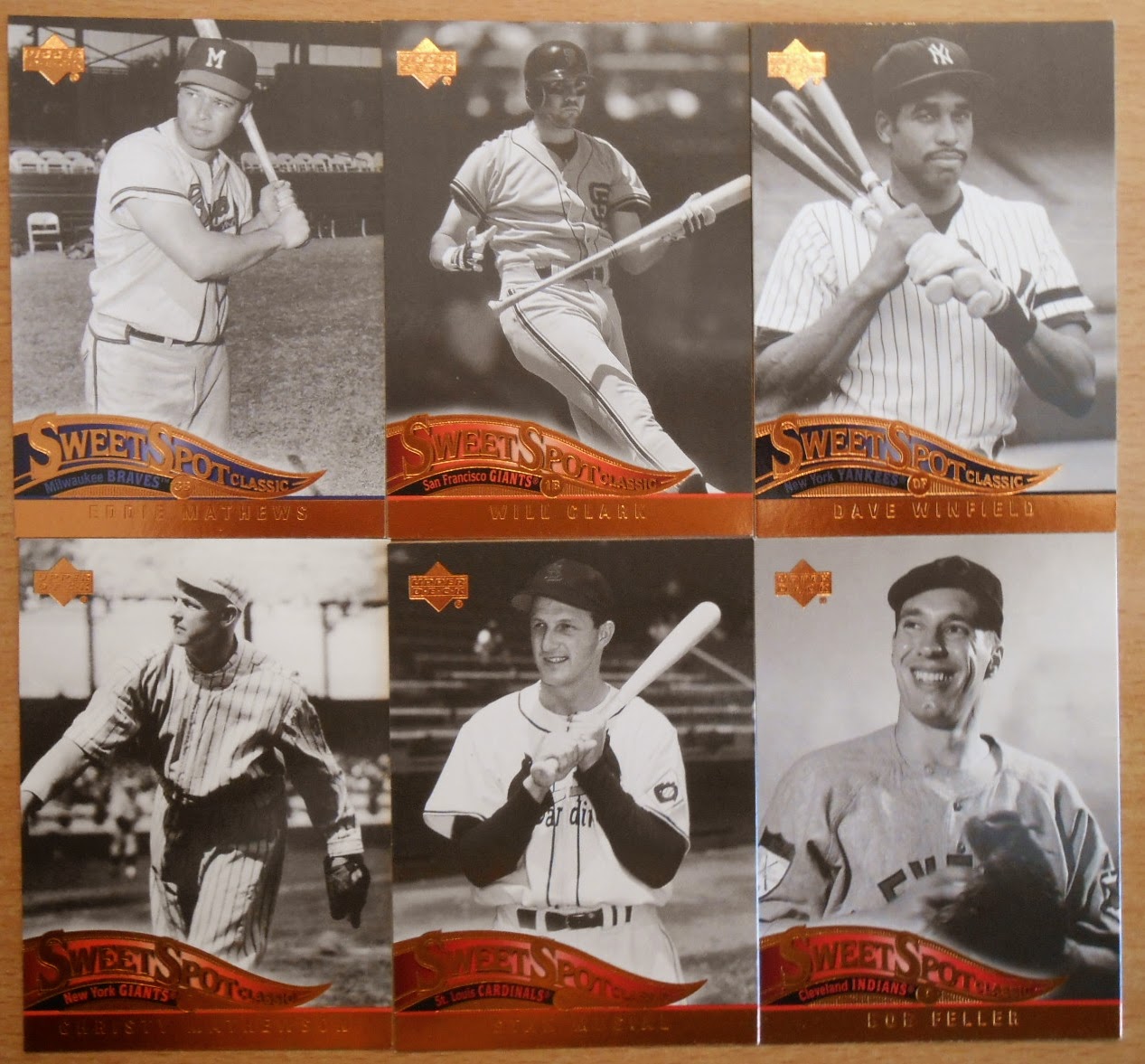 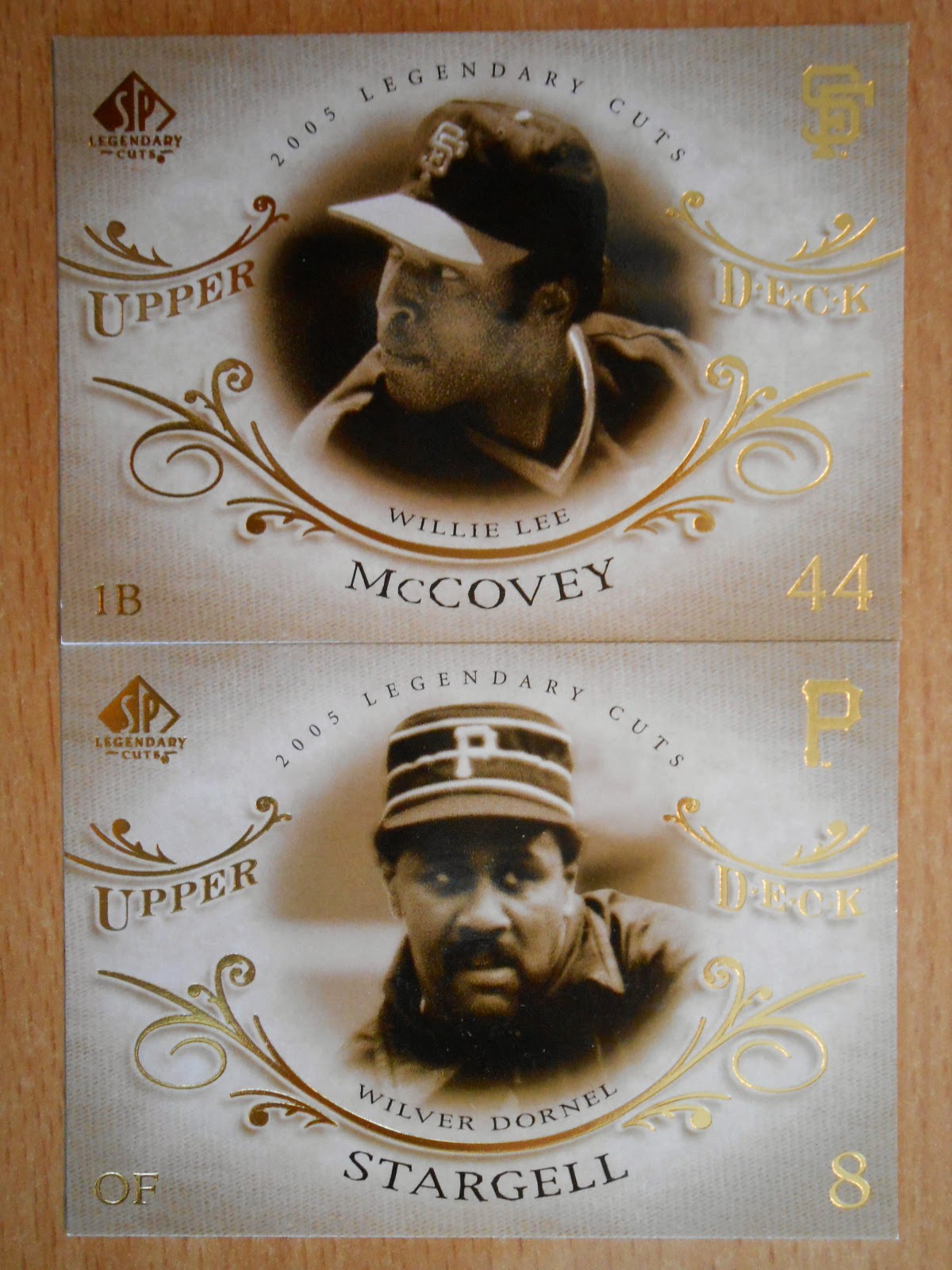 And then I found another set in the dime boxes that made really excited.  I'm in the process of putting together a "vintage" binder of reprints.  I'll never be able to own cards of stars from the 50's, 60's, or 70's, but I can offer cards like "The Cards Your Mother Threw Out" and the like a good home in my binders.  Reprints aren't worth much coin, but they sure are fun to look at!  I'm all about the fun.

I bought every 2004 Topps "Fan Favorites" card I could scrounge up. 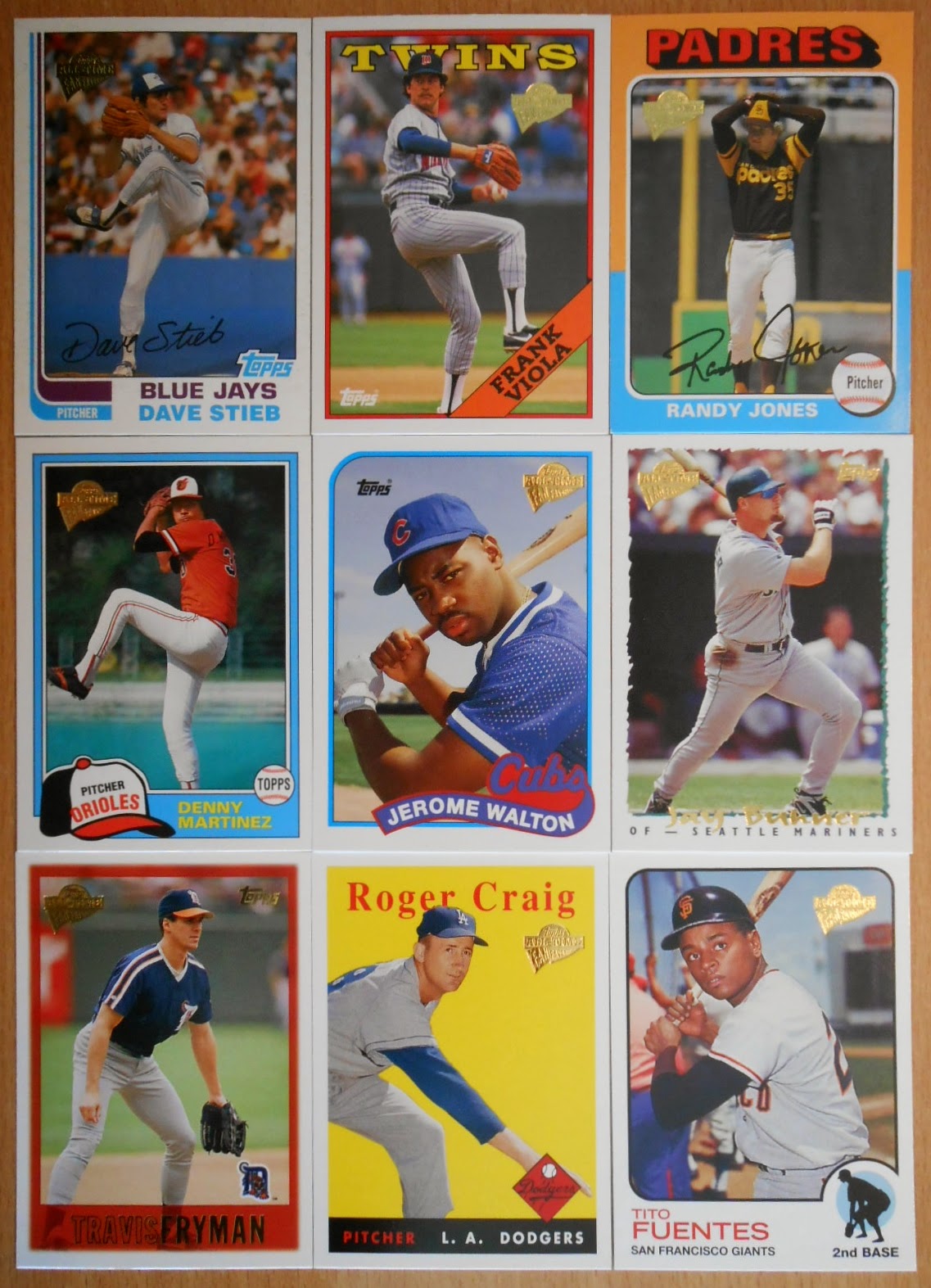 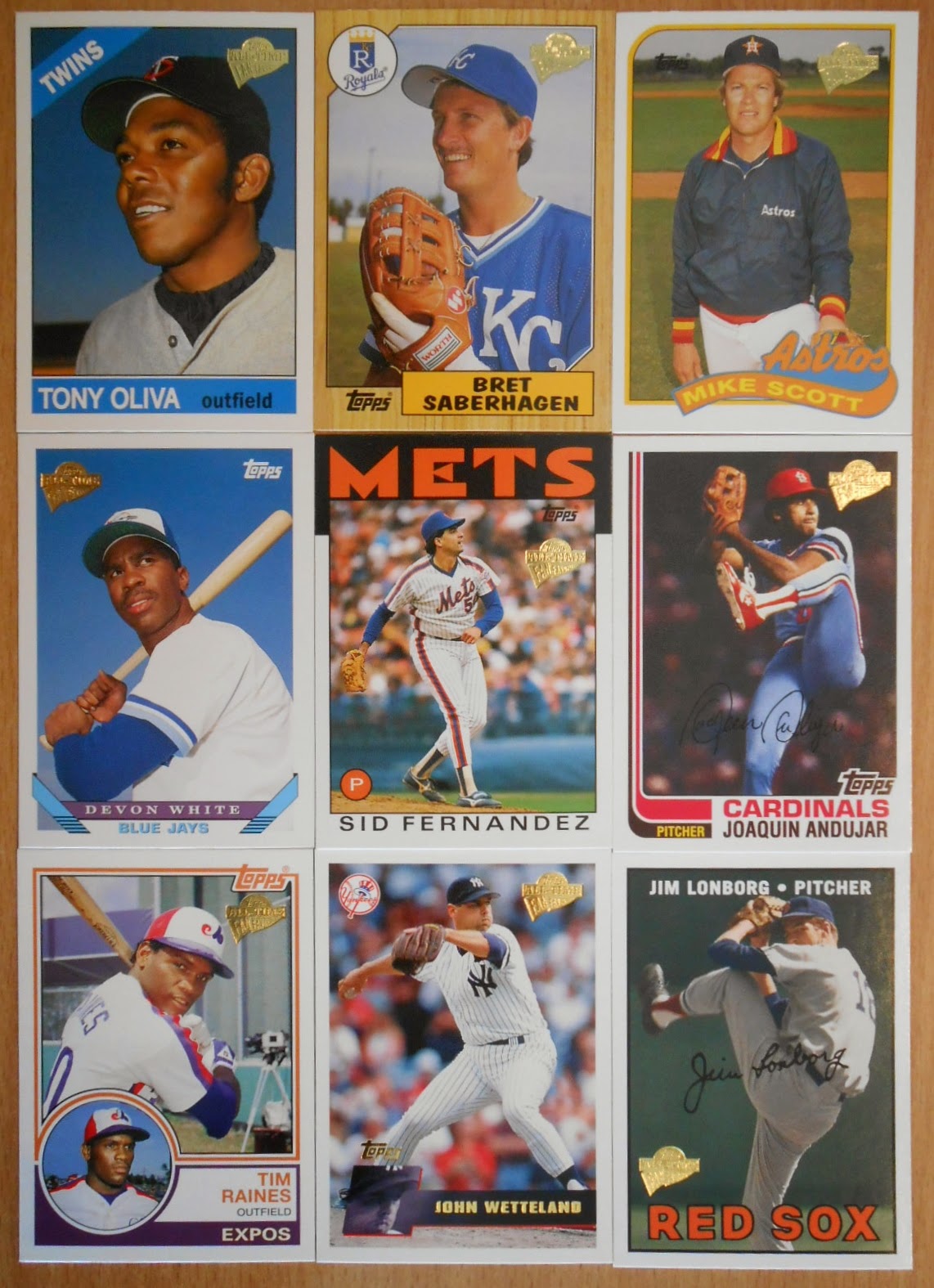 C'mon, isn't that Roger Craig card awesome?  In all, I wound up with thirty-two unique cards from the Fan Favorites set, twenty-eight of which are shown on this blog post.

Three picture of nine cards each.  Where's the twenty-eighth card?  I found two Andre Dawson cards that I bought for my sister, one of which is a Fan Favorite!  The least I could do for her troubles sifting through the Donruss junk wax. 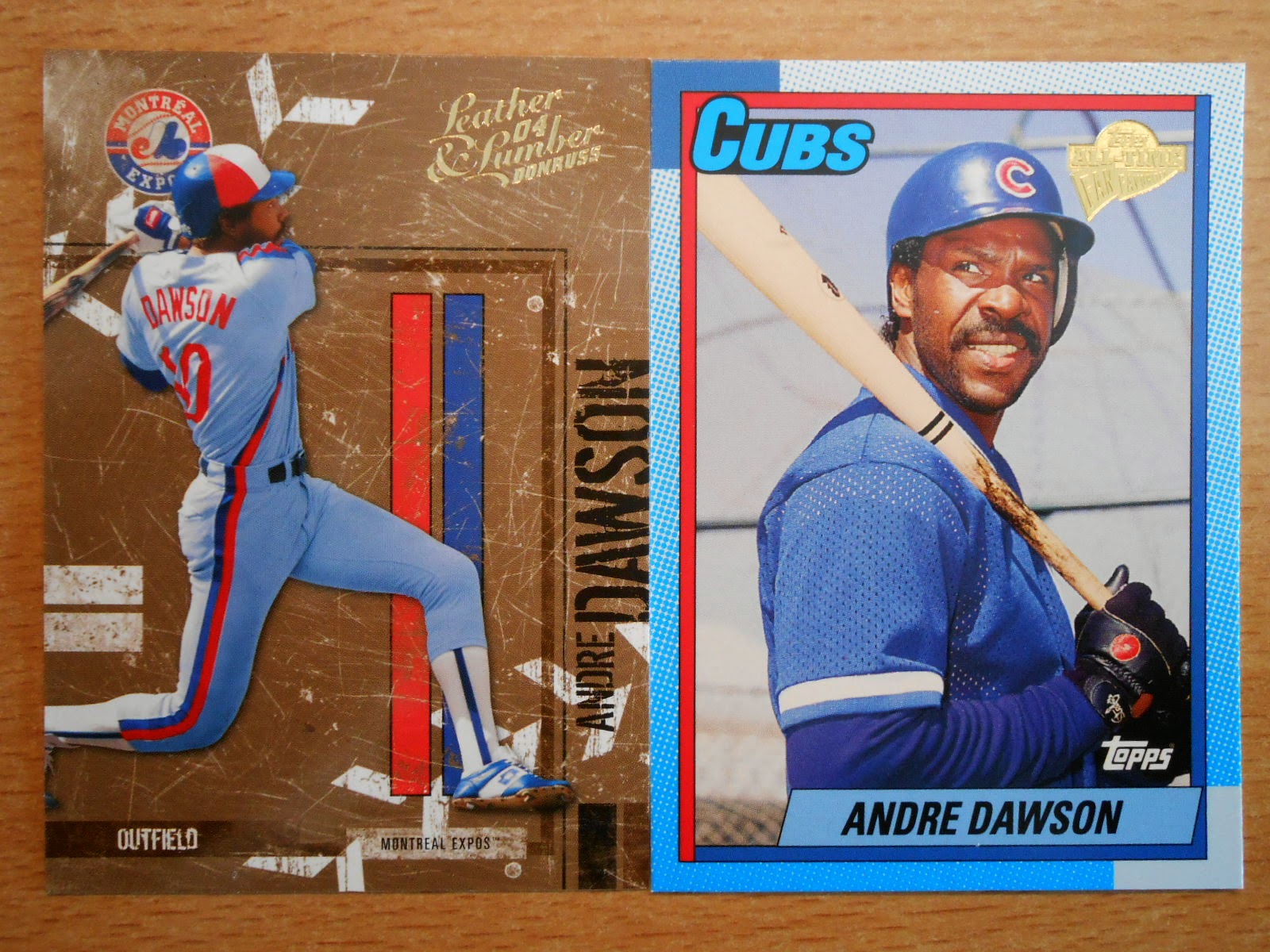 I also found four Kerry Wood cards that were new  to me.  The Topps Finest in the lower left if my favorite by far.  It's beautiful in hand.  I'm up to 309 different cards of Kerry Wood! 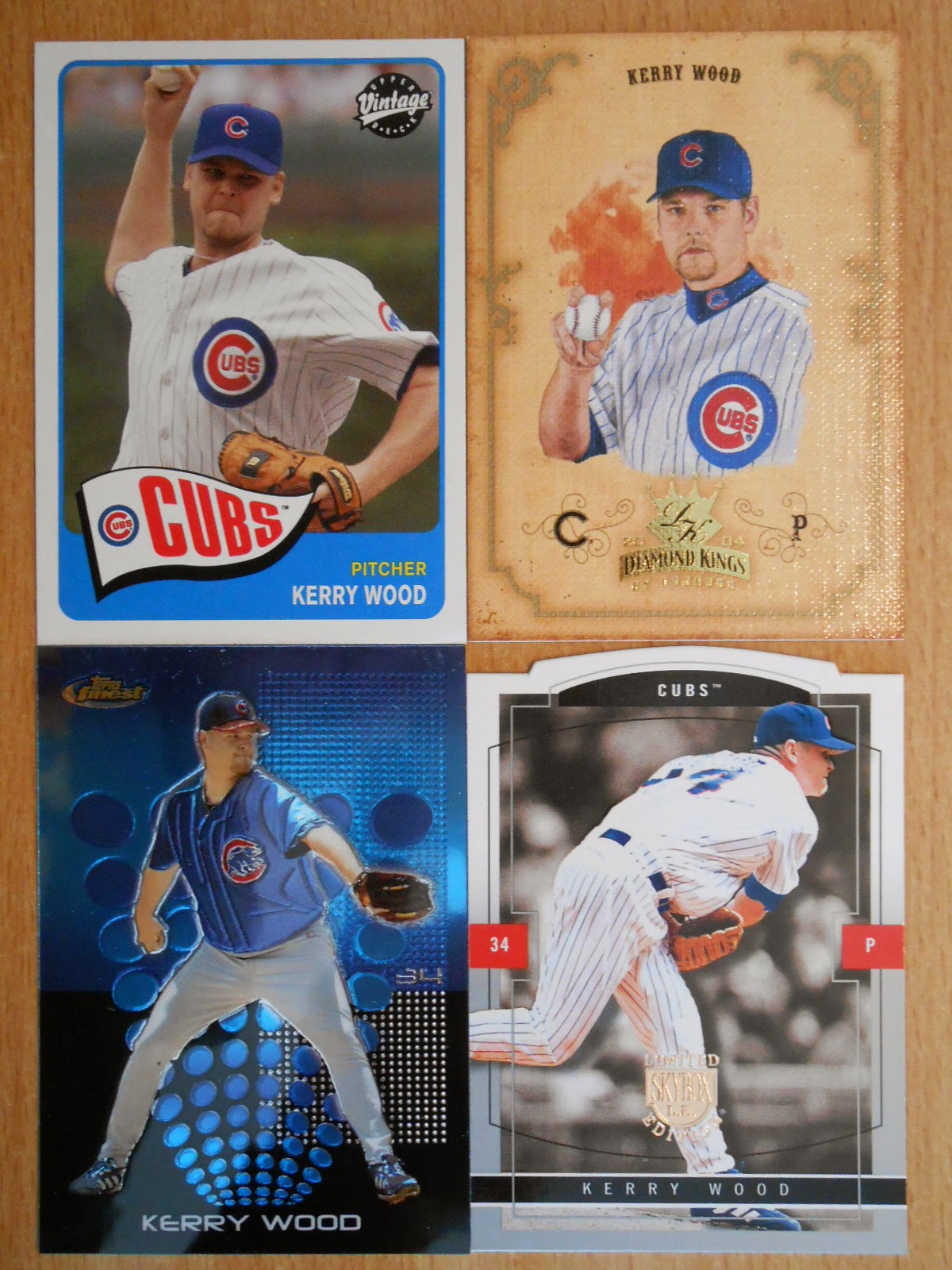 The price for the above cards?  Five bucks.  I was pretty happy the total, especially considering I walked out of there with more than sixty cards.

Unfortunately, I didn't stop there.  No, I didn't by the 2014 Heritage hobby packs he was peddling for five dollars each or the 2014 boxes of Turkey Red for forty-five dollars. My LCS in P-town offers much better deals.

Nope, I caved and bought 130 retail packs of 2012 Panini Triple Play.  At thirty cents a pack I couldn't pass them up.  I was twelve cards short of finishing the set and I was bound to complete the 300 card set after opening 910 more cards.  Right?

I'm still trying to polish off that master set and I'm now down to five cards. I didn't even have a fighting chance, because I came to find out later that the game-used cards aren't inserted into retail packs, so I'm still missing the "Real Feel Pants" card.  Bummer.

No worries.  My friend, my sister and myself spent our last evening ripping into the packs.  It was lots of fun.  I can only imagine the maid's face when she emptied the trash from our suite the next day.  Pack wrappers galore!