I don't have cable.  I don't have Dish.  I don't have a subscription to MLB.tv.  To watch my Cubs I usually head off to the nearest bar, which just so happens to be a national chain by the name of Old Chicago. 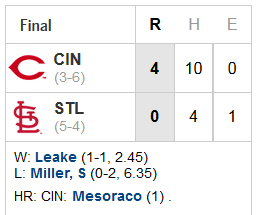 There was one seat at the bar and it was next to a Cardinal fan who was wearing a Yadier Molina jersey.  No biggie.  I can make nice.  The television directly in front of me was showing the Blackhawks.  I should really be more excited about the Hawks, but I'm just not a hockey guy. The TV to the right was doing its normal trivia thing and the TV to the left was just starting to show a replay of the Cardinal game from earlier in the day.

The Cubs were going to be on in a half-hour, which if I played my cards right would mean that I would be able to butter up the Cardinal fan and coerce him to switch the replay of the Cadinals 4-0 loss to the Reds to the live Cubs game.

We talked about the new "Ballpark Village" across from Busch Stadium and how my uncle works for the Cardinals.  We talked a little about Yadier Molina and Matt Carpenter, as a video showed Carpenter making throws from home to Molina covering second.

We both talked about how really don't necessarily despise the others' favorite team, as we are both fans of baseball.  Yep, I actually cheered for the Cardinals in the playoffs last fall.

I soon noticed he was settling up his tab and I realized that I wouldn't have to even ask if it would be okay if we changed the channel.  I just had to wait him out.

Before I knew it, we said our good-byes and then I was tapped on the shoulder.

"The guy in the Cardinal jersey asked me to deliver this," explained the host from the doorway. 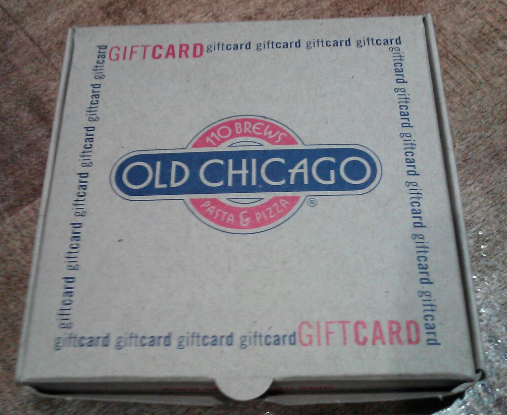 I opened it up and was absolutely floored.  So much so that the bartender asked me if I was okay. 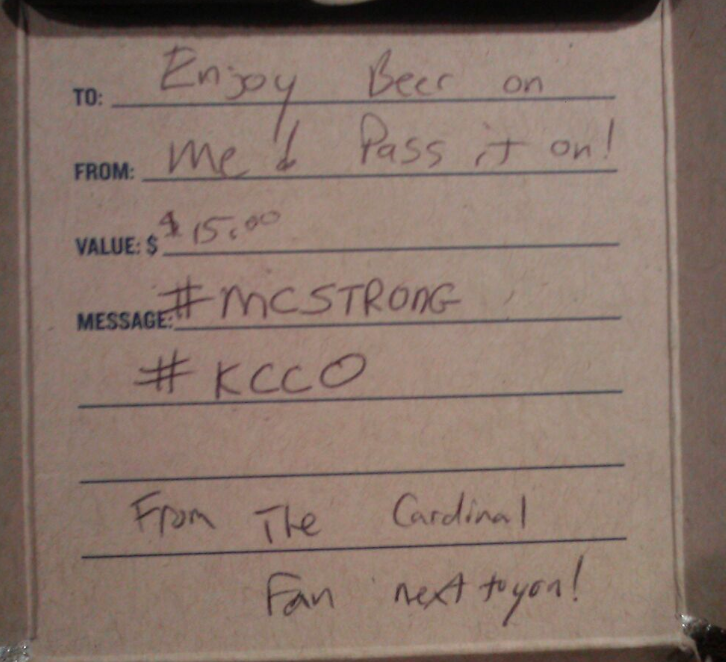 Wow.     I'm all about the saying "Pay it forward."  And I most certainly will, but for the time I was content to #KCCO.

What a nice gesture.  To think...  maybe Cardinal and Cub fans can co-exist?