Where Are The Now? A look back at the 2007 MWL Prospect Set.

The last time I was at a Peoria Chiefs game I picked up three Midwest League prospect sets at their end of the year sale.  The 2008 and 2011 sets were new to my collection, but the 2007 set was a repeat.  Bummer.

So, why not crack it open and see what's become of these one-time prospects of the Low-A Midwest League?  Sounds like a fun idea to me.

The Low-A league in 2007 featured fourteen teams that were strewn throughout Iowa, Wisconsin, Illinois, Indiana, Michigan, and Ohio.  Let's not confuse this with an All-Star set, as each of the fourteen teams received two players in the set and from what I can tell there was no consideration as to position given.

First, let's breakdown how this class 2007 prospects were acquired by their big league clubs:

Preston Mattingly, SS, Great Lakes Loons, 1st Round pick of the Dodgers in 2006.  Mattingly, at the age of 23, was still struggling with Midwest league pitching in 2011.  He was converted to an outfielder in 2008, but a position switch and Big League Bloodlines couldn't help raise his career OPS any higher than .611.  Preston's name hasn't surfaced in the baseball databases in the last two years.

Clayton Kershaw, LHP, Great Lakes Loons, 1st Round pick of the Dodgers in 2006. 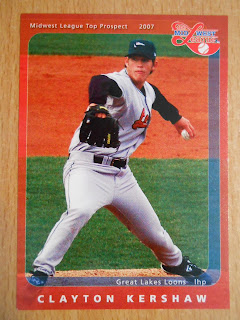 Yep, here's the big hit in the pack and just a couple of cards in!  Kershaw dominated the Midwest League at age 19 in 2007 and he was in promoted to AA later that summer.  He's pretty much shut down major league hitters since his debut in late May of 2008.  In my mind's eye he's your NL Cy Young winner in 2013. 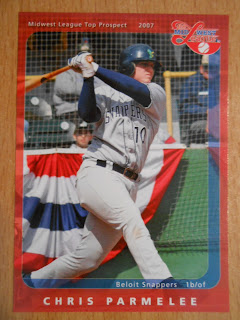 Parmelee has spent parts of each of the last three seasons shuffling between the minors and Minnesota.  Although he has collected an OPS of greater than .800 down on the farm, but he hasn't sniffed .700 during the last two seasons in the big leagues. 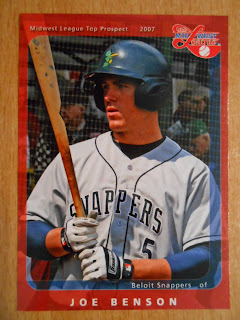 Benson, now 25, had a cup of coffee in Minnesota in 2011 after a solid year at AA, but he hasn't been back in "The Show" since then.  He was claimed off waivers by Texas earlier this year and he was just designated for assignment last month.

Matt Campbell, LHP, Burlington Bees, 1st Round pick of the Royals in 2004.  The Royal's farm hands didn't have much luck in this set.  A-ball wound up being Campbell's ceiling as well and he last pitched in 2007.

SIDE NOTE: Burlington is the first team to have both selected players come up short on making the major leagues.  Jarrod Dyson was probably the best future prospect on this team.

John Whittleman, INF, Clinton Lumberkings, 2nd Round pick of the Rangers in 2005.  Whittleman hit 0.239 during an eight year minor league career.  He played 93 games in the Royals farm system last season, but appears to have retired.

Omar Poveda, RHP, Clinton Lumberkings, signed as NDFA by the Rangers in 2004.  Poveda may see a major league roster yet.  He's with his third franchise and he made twenty-five starts for Atlanta's AAA affiliate this past season while posting an ERA of 3.62.

SIDE NOTE: Craig Gentry is the only player of note on the 2007 Lumberkings.

David Herndon, RHP, Cedar Rapids Kernels, 5th Round pick of the Angels in 2006. 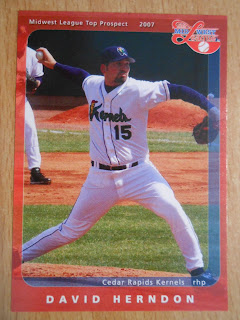 Herndon, now 27, is an interesting case: four different franchises, three separate seasons out of the bullpen with the Phillies (2010-2012), and also four different levels in the Yankees' farm system this year.

Hank Conger, C, Cedar Rapids Kernels, 1st Round pick of the Angels in 2006. 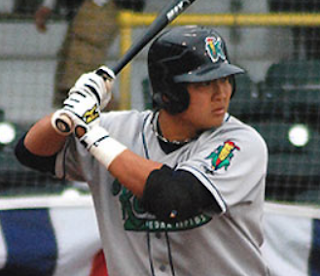 Conger has split time behind the dish for the Angels this year while posting a .740 OPS.  He rode the shuttle from Anaheim to the minors during the 2010-2012 seasons.  Looks like he's in the "Bigs" to stay.  For whatever reason I was missing Conger's card in the set.  Perhaps the quality control department feel asleep?

Chris Valaika, SS, Dayton Dragons, 3rd Round pick of the Reds in 2006. 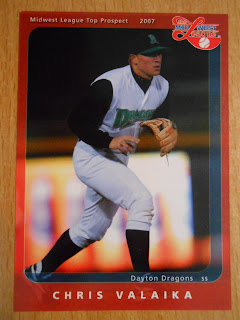 Valaika is a utility player that has spent parts of three seasons in the major leagues.  He's played all four infield positions with the Marlins this year in very limited time. 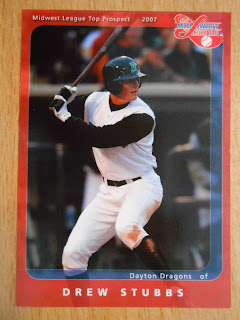 Stubbs is definitely one of the bigger names in this set.  Now 28, Stubbs is finishing up his fourth year as a starting outfielder.  He started with the Reds, but is now roaming Progressive Field grasses for the Indians.

Aaron Breit, RHP, Fort Wayne Wizards, 12th Round pick of the Padres in 2005.  Breit last pitched in AA in 2011 after compiling a career ERA of 5.13 in six minor league seasons.

Cedric Hunter, OF, Fort Wayne Wizards, 3rd Round pick of the Padres in 2006. 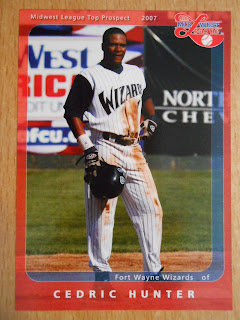 Hunter had a cup of coffee with the Padres in 2011 and he spent this year in AA and AAA in the Indians' system.  He's put up some decent numbers in the minors, but will probably be lucky to stick with a MLB team as anything more than a reserve outfielder.

Jermaine Mitchell, OF, Kane County Cougars, 5th Round pick of the Athletics in 2006. Mitchell is currently with his third organization, the Twins, and has posted a career OPS of .800 over the course of eight seasons.  He's been playing in AAA since 2010.  Perhaps he'll get "the call" soon?

SIDE NOTE:  Two future MLB All-Stars played for the Cougars in 2007:  Andrew Bailey and Trevor Cahill.  Too bad they weren't featured in this set instead of Mitchell and Sulentic.

Kyle Ginley, RHP, Lansing Lugnuts, 17th Round pick of the Blue Jays in 2006.  Ginley last pitched for the Dunedin Blue Jays of the High-A Florida State League in 2009 at the age of 22.

Travis Snider, OF, Lansing Lugnuts, 1st Round pick of the Blue Jays in 2006. 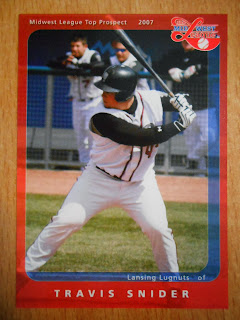 Travis Snider was a Top 100 Baseball America prospect three times for the Blue Jays and now is a reserve outfielder for the Pittsburgh Pirates.  He's played in the majors during parts of six seasons, but 2013 was the first year that he eclipsed 100 games played.

Welington Castillo, C, Peoria Chiefs, signed as a NDFA by the Cubs in 2004. 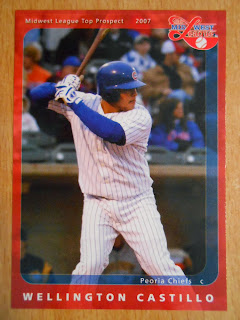 I was pretty excited to find "Beef" Welington Castillo in this set.  He has entrenched himself in the Cubs' future plans and has turned himself into a very serviceable catcher.  If you need more proof that Castillo is "the man", then go no further than this site.  It says that he's a stud and everyone knows that websites with numbers and statistics don't lie.

Rafael Dolis, RHP, Peoria Chiefs, signed as a NDFA by the Cubs in 2004. 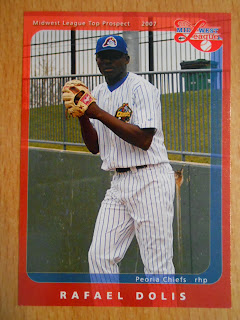 Dolis made his Major League Debut in 2011 and has made brief appearances in Chicago each of the following two seasons.  He has the physical tools, but he has yet to master the relief role.  This year his development was set back a little by an injury that robbed him of all but twenty-one pitching appearances.  Only 25 years old, Dolis still has time to earn a role in Chicago's bullpen.

Luke Gorsett, OF, Swing of the Quad Cities, 7th Round pick of the Cardinals in 2006.  Luke Gorsett registered a 0.653 OPS in 100 games in 2008 across A and AA, his last season in the minors. Corner outfielders usually need to hit a little better than that to make it to "The Show."

Daryl Jones, OF, Swing of the Quad Cities, 3rd Round pick of the Cardinals in 2005. Played minor league baseball for eight seasons, two of which were in AAA.  In 2011 he hit 0.250 for the Memphis Redbirds and in 2012 he couldn't manage to keep his batting average above the Mendoza line for the AAA Louisville Bats of the Cincinnati Reds' organization.  Daryl Jones did not play professional baseball in 2013.

SIDE NOTE:  Ugh.  What a rough roster.  The biggest name is Yadier Molina's current backup: Tony Cruz.  Not much to see here... let's move on. 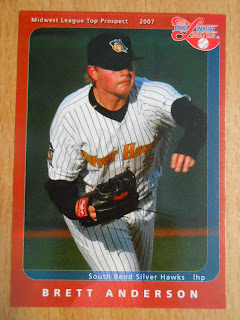 Formerly of the D'backs, Anderson was traded to Oakland in December of 2007 with Carlos Gonzalez and four other players for Dan Haren.Anderson.  Anderson was sixth in the Rookie of the Year voting in 2009 when he went 11-11 with a 4.06 ERA in 30 starts.  Since then he has had a difficult time staying healthy and hasn't started more than 19 games in any of the last four seasons.

Gerardo Parra, OF, South Bend Silver Hawks, 7th Round pick of the Diamondbacks in 2005. 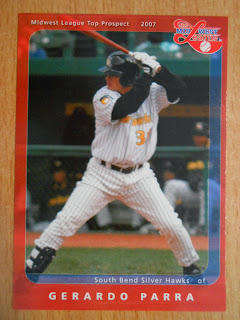 Parra finished eighth in the Rookie of the Year balloting in 2009 and he won a Gold Glove in 2011 for his work in left field.  While hitting 0.277 as a five year starter for the Dbacks, Parra has been a steady, cost controlled contributor.  In my opinion, Parra is a nice addition to this set.

Scott Sizemore, 2B, West Michigan Whitecaps, 5th Round pick of the Tigers in 2006. 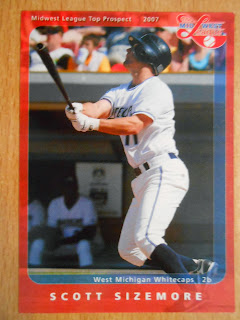 Sizemore hit 17 homers and batted 0.308 in 2009, while manning second base for Detroit's AA and AAA farm clubs.  I remember taking a flier on him in my fantasy baseball league in 2010, but he did nothing but disappoint at the big league level.  Since then, he's been trying to earn his keep in the majors, but he's had to wrestle with the injury bug.  Sizemore missed all of 2012 with a torn ACL and then re-injured the same knee in game number two of the 2013 campaign.  Ouch.

Gorkys Hernandez, OF, West Michigan Whitecaps, signed as a NDFA by the Tigers in 2005. 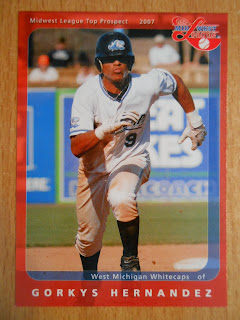 Hernandez played 70 games in the 2012 with the Pirates and Marlins as a utility outfielder.  At this point, he looks to be nothing more than a 5th outfielder type.  He probably will be better remember for being traded four different times in his career, most notably in deals for Edgar Renteria, Nate McClouth, and Gaby Sanchez.

Carlos Triunfel, INF, Wisconsin Timber Rattlers, signed as a NDFA by the Mariners in 2006. 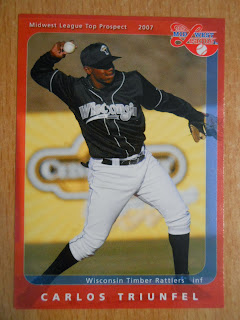 Triunfel has slowly been working is way up the minor league ladder and experienced his first taste of the big leagues in 2012 as a utility infielder.  Only 23, he played in 17 more games with the Mariners in 2013 and I presume he will fight for a bigger role on the club in 2014.

Tony Butler, LHP, Wisconsin Timber Rattlers, 3rd Round pick of the Mariners in 2006.  Butler bounced around in the minors with the Mariners, then Baltimore and Milwaukee, and then resigned with the Mariners before not being tenured a contract in 2012 and pitching for four different teams in the Independent Leagues that season.  He did not play professional baseball in 2013.

In all, I would say of the 28 featured in the set there are 4 who could be described as an impact player for their organization in 2013.  Obviously, Kershaw is the highlight of the set, but Drew Stubbs, Gerardo Parra, and Welington Castillo are all nice pieces.  With more playing time Hank Conger could potentially be player to add to the list.  Also, Brett Anderson and Scott Sizemore are two more who definitely have the talent to be difference makers if they can chase away the injury bug.

This prospect set was probably the best purchase I have made for $2.50 in quite some time.  Not only do I now own a Clayton Kershaw minor league card, but the compilation of this post kept me busy for quite a few evenings.  Fun stuff!