... then I met a beautiful woman who took the time to introduce me to some of the tastier options.  Mmmm...  tempura.  Everything is better fried!

What about Nomo's Sushi Platter? Hmmm, I don't know.  I've never tasted a blog before.  The blog in question is run by Spiegel83 and he is one of the blogosphere's fine contributors.

I sent him some boys in Dodger blue and fired back with some players in Cubbie blue.  Life is good. 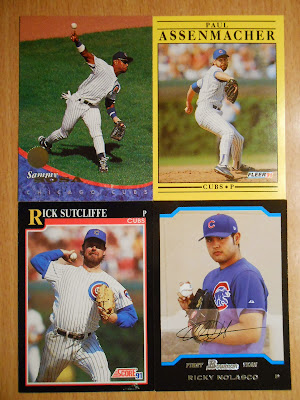 Spiegel sent a nice assortment of past Cubs.  Quick comments on each of the cards above:
A. Late 1990's cards all too often featured Sammy swinging the lumber.  It's nice to have this '94 Leaf fielding shot to add to my collection.
B. I do love those '91 yellow Fleer cards.
C. Sutcliffe was always a player first, and I'll always remember him that way. He's a decent commentator, but I feel he tries to turn heads to frequently with his comments.
D. I forgot Ricky Nolasco was a Cub!  Nice rookie card!

How about a some sweet swinging first basemen? 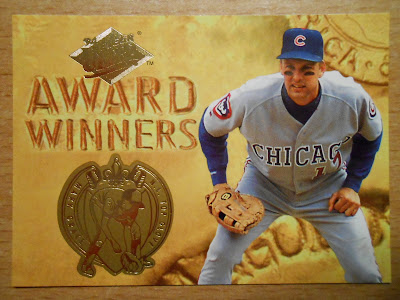 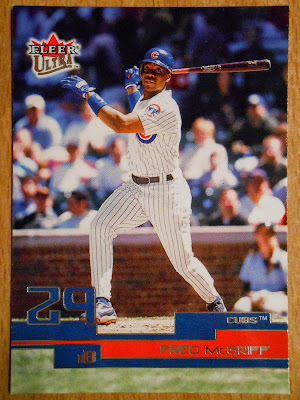 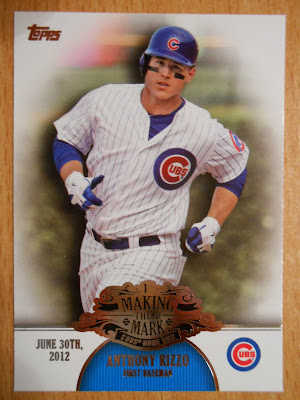 I don't have many Moises Alou cards in a Cubs' uniform, because I was out of collecting when he played on the north side of Chicago.  Here's a nice 2004 Topps Cracker Jack jersey card though: 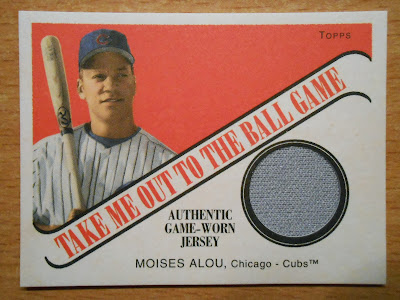 I liked Alou when he played for the Cubs, but here are my first two recollections of Alou:
1. He used to pee on his hands to get a better grip on the bat.
2. Roughly ten years ago, Steve Bartman would not have received the backlash for going after a baseball if Moises hadn't made such a scene about the fan interference.

I still hold Moises in high regard, but yikes!

Last, but not least, I have my first base card.  Another Sosa card, but this one comes to you via 2003 Donruss Studio. 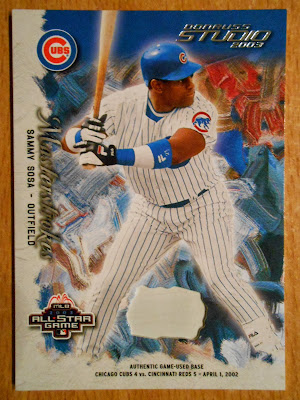 I wish card companies would make more of an effort to incorporate a photo that jives with the relic.  There are plenty of images out there of Sammy sliding into a base or simply rounding the bases after a homer.  Why the batting stance shot?  Regardless, now I have an authentic game used base from April 1st, 2002 to add to add to my collection!  I've already taken it out of the protective sleeve to touch the base... twice!

This was a pretty righteous trade, overall.  Who would have thought sushi would lead to baseball cards?  Thanks, Spiegel!