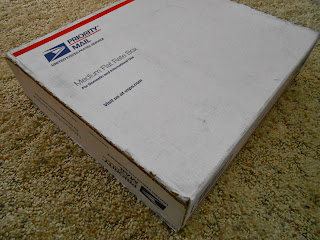 This past summer I ponied up a small entry fee and entered Matt's 2013 Fantasy Baseball Blaster Legaue.  I've never really played for money before, let alone baseball cards, but I gave it the "old college try" and came away pretty happy.

In all, I finished the regular season in 3rd place, 5.5 games back out of first with a 0.630 winning percentage.  The solid regular season effort was fueled by my love for pitching as I won the ERA, WHIP, and saves categories.  Each categorical win netted me a repack box. Nice!

I somehow finagled my through the playoffs and won the whole thing.  It was a tight race and I was definitely sweating it out the last weekend, but I made it through. As the playoff champion I was awarded three blasters.  Awesome.

Here's a picture of the box that was resting on my doorstep last Friday.

What was inside?  The aforementioned repacks and a blaster of Bowman, Archives, and Topps Series 2. 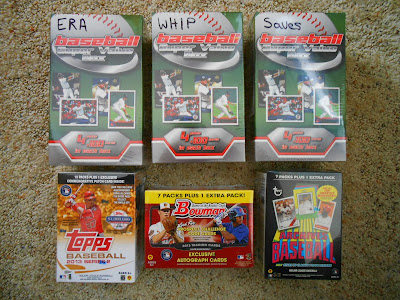 I cracked into the Bowman blaster with hopes of updating some cards in my Frankenset.  I came away a little disappointed, because I was only able to upgrade from a Joe Maurer gold parallel to this silver ice parallel. 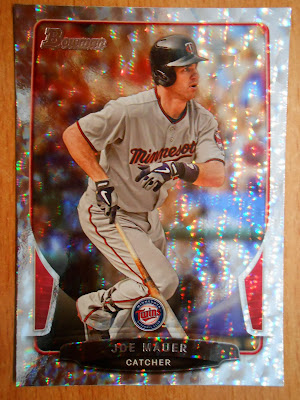 I did pull a couple of nice rookies: a Top 100 Byron Buxton and a mini chrome of Sonny Gay.  Nice. 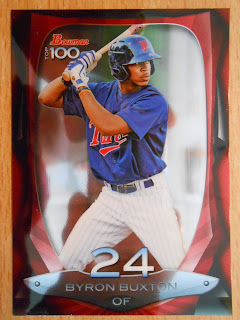 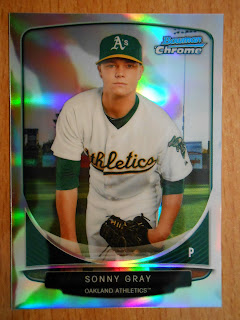 I open numerous jumbos and two hobby boxes of packs this summer of 2013 Bowman, but it took a blaster for me to uncover a numbered parallel.  Behold... 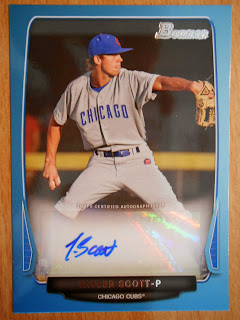 I found a Taylor Scott blue autograph numbered 5/500.  I couldn't be happier that I ripped an autograph of a Cub!

So far my prize package is starting off strong with the Cub auto hit.  Stay tuned to see how the rest of the blasters and repacks shake out.

Oh, and I'd be remiss if I didn't thank Matt, from Once a Cub, for putting together and overseeing a solid fantasy league this summer.   Thanks again, Matt!