He's Bleedin' Brown and Gold in Iowa and I Benefit!

Being only three hours from Wrigley Field I can see my Cubs play, in person, on a semi-regular basis.  I enjoy my day trips up to Chicago during the summer and it's easy to follow the Cubs within the local newspaper.  I guess I sometimes take that for granted.  It must be difficult rooting for a baseball team that is 1,700 miles away from your doorstep AND doesn't receive much coverage from the major media outlets.  Duff, of Bleedin' Brown and Gold, is in such a predicament and I feel for him as he lives in Iowa and is a Padres fan.

Duff reached out to me a little while back and offered to send some Iowa Cubs programs my way and some cardboard featuring Cubs.  How could I refuse? 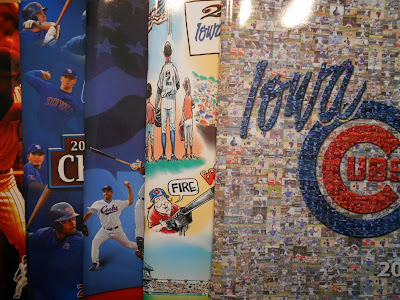 Above are the five programs he sent my way and most of them have a scorecard inside from the day's game.  The furthest one on the right is the 2013 edition and my favorite.  I guess Duff tries to get his baseball fix by taking in some AAA baseball.  I've been to Des Moines a couple of times and they have a pretty nice stadium near the river.

I did my best to package up some brown and gold, but I feel I came up short in my quest.  Thankfully, the one big local card show in my area is less than two months away.  Hooray!  I'll be on the look out for some Friars in the future!

In the meantime, please allow me to show off what Duff generously sent my way.

Hee Seop Choi and Julio Zuleta were two of the Cubs first base prospects that never really "stuck" in the major leagues.  Both had huge power potential, but they weren't consistent enough with the bat and flamed out. 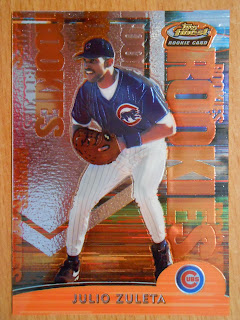 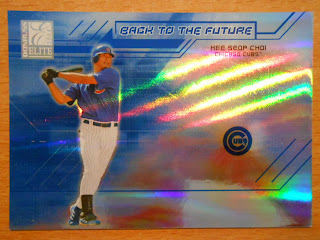 Both cards are super shiny and everyone knows I have a thing for shiny and sparkly cards.  The Choi card would be perfect for an autograph.  I wonder what the success rate is for TTM autograph requests to Korea?

Shoot, let's just stay on a little bit of a "players who were once prospects" kick, shall we? 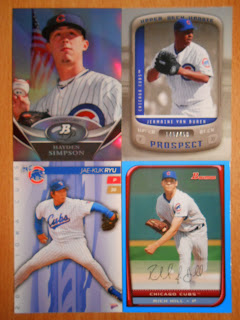 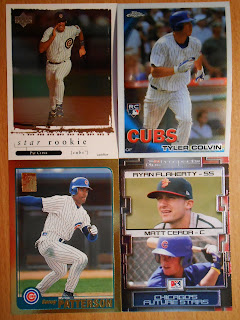 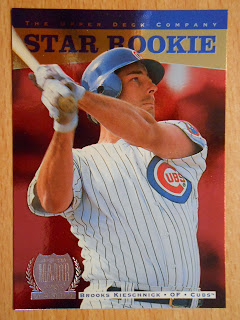 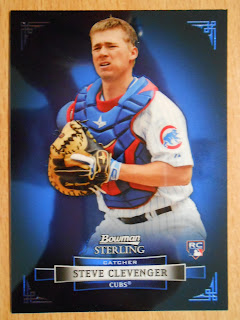 Holy Cow!  That's a bunch of players the Cubs have put attached their hopes and dreams to.  At least three of the ten are serial numbered, which is nice, but my two favorites are of Brooks Kieschnick and Steve Clevenger.  I kind of have a mini collection of Kieschnick because I've been infatuated with him ever since he converted from hitter to pitcher to jack-of-all-trades.  Why Clevenger?  It's my first Clevenger card and it is slick looking.  Blue shiny backgrounds on Cubs cards are really a nice way to go.


A new Ryno to add to my collection!  This one is a 1997 Topps Stars card and number 686 in my Sandberg collection! 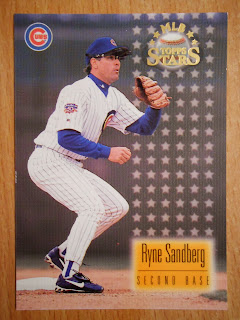 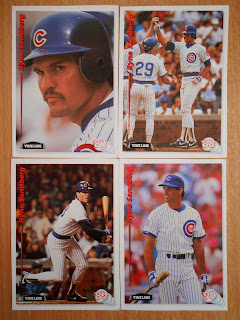 The four cards on the right are from the Vineline, which is the magazine of the Chicago Cubs.  I've been a subscriber on and off for years, and I have these cards framed and hanging on my wall as an uncut sheet.  Pretty neat to have them cut so I can add them to my binder!

These two guys were fun to watch and were part of the Cubs' "Cajun Connection" up the middle not so long ago. 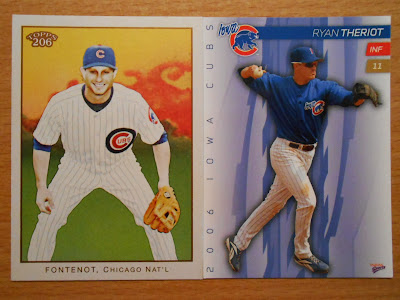 The Topps 206 card is nicely done and I love minor league cards.  Great additions to my collection.

Not only do blue shiny backgrounds work well with Cubs cards, but anything with red, white, and blue is a cinch to catch my eye. 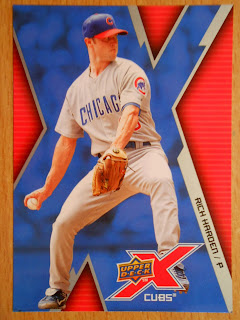 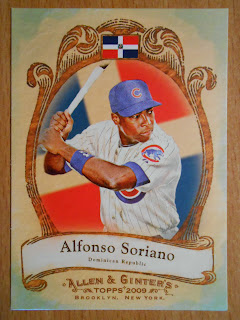 I was ecstatic when the Cubs traded for Harden as he was one of my favorites when he came up with the Athletics.  Too bad Rich couldn't stay healthy, because he just some filthy stuff.  Soriano left Chicago as a "good guy" and the Chicago media doesn't allow that to happen too often.  Congrats to Alfonso on reaching 50+ RBIs with both the Cubs and the Yankees this year.  I'm sure the list of players who have knocked in 50+ for two different teams in the same season is a short one.

Last but not least we have a 2013 Panini Prizm card of Mr. Cub and a silver ice parallel of the 2013 Bowman Gioskar Amaya card. 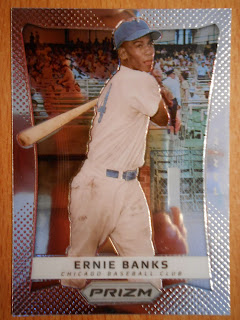 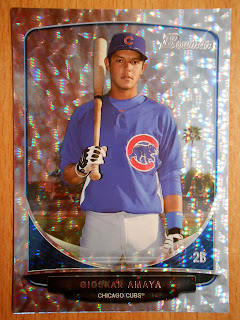 Ernie will certainly find a place in my Cubs binder and the Amaya silver ice card will slide into my 2013 Bowman FrankenSet.  Nice!

Thanks for a great trade, Duff!  It was a little lopsided in my favor so look out for some Padres before the end of the year!