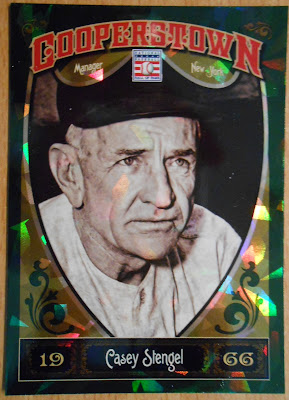 When I think of Casey Stengel the following words do not come to mind: sparkly, shiny, or eye-catching in the light.  Nope, when I think of Stengel I recall what I read of him in books:
1. he was one of the first to use platoons
2. his nickname was "The Old Professor"
3. he was hard on his players but great with the media

Well, Panini Cooperstown is back for another edition and they have sparkly parallels that feature Hall-of-Famers, like Casey Stengel.

Behold, a green parallel of The Old Professor.

Granted, my camera doesn't truly capture the sparkliness of this card, but it is very cool.  Probably my favorite card in the two packs of 2013 Panini Cooperstown I purchased last weekend.

Here's a trio of Cleveland players that I found in the two packs.  I would have said "Indians," but I think some of them may have been "Spiders" at one point in time.  I could be wrong.  One thing is for sure: I'm too tired to look it up.
I always thought of Tris Speaker as a member of the Red Sox, but come to find out he actually played more seasons in Cleveland.   Huh, learn something new everyday. 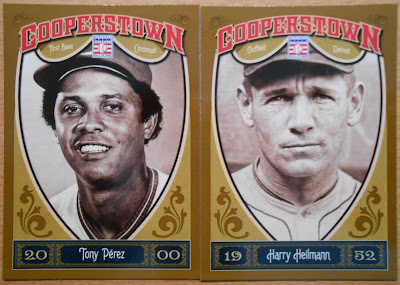 These two cards win the prize for being the two most likely to get shipped off in a PWE at some point.

How about some cards more relevant to this collector? 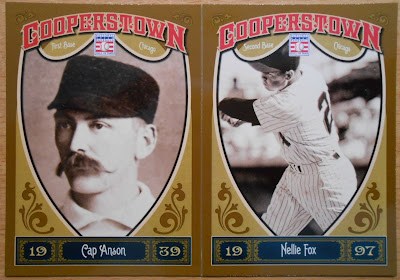 Ahh, that's better.  Cap Anson of the Cubs and Nellie Fox of the Pale Hose.  By the time this posts, Nellie will probably already be in the hands of JediJeff.

Well, that's it for the base cards.  How about some Stars of the Diamond Chips? 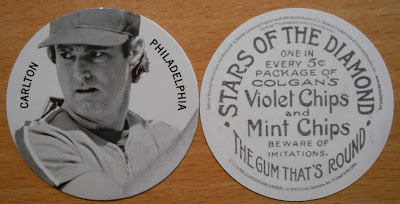 Steve Carlton is on the left and Edd Roush (Reds) is on the right.  These chips are different and I kind of like them.  They have an A&G feel to the back of them which catches my attention.  I'm a fan of the black and white as well.  I'm happy that I pulled "Lefty", but Edd Roush isn't one of my top 100 Hall-of-Famers.  Thus, he was a good option to show you the what the backs look like. 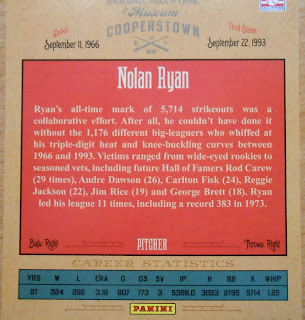 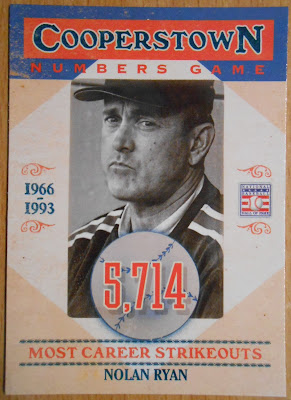 The best strikeout pitcher of all-time. Notice how Panini cropped the photo so that Nolan's cap logo isn't an issue with the photo.  For not having a MLB license, they have done a really nice job of working around it in this set.

The next card is even better, in my eyes. 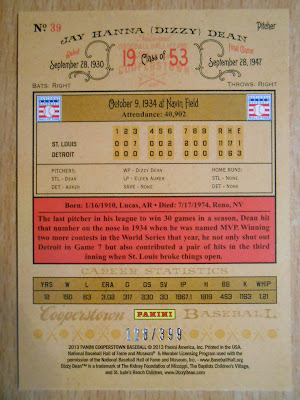 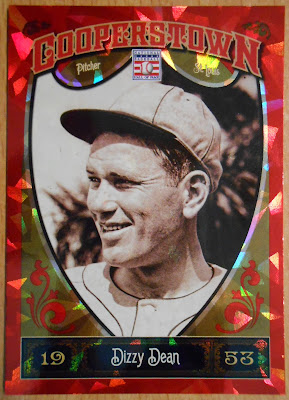 A red sparkly parallel of a Redbird.  Oh, and it's numbered to 399.  Very nice.  Wouldn't it be cool if parallels were done to team colors?  This, above, would be the perfect example.  Oakland could have green, the Rockies would be purple... and Blue for the Cubs (and a few other teams).   Man, I really do go for sparkly blue cards of Cubs.

If you're looking for any Panini Cooperstown let me know.  All of these can be had if the right Cubs cards come along!

Have a great weekend, folks.