No, no.  Everything is just fine.  I actually found a new-to-me blogger through Nachos Grande and contacted Jeff about some 2009 Tri-Star Obak I had to help complete his set.  Jeff's blog is name "Cardboard Catastrophes", but his return trade package was anything but.

We'll show of the cards in a second, but first I want to thank Jeff for his overwhelming dedication to this trade.  He wasn't satisfied with what he could offer me in return for the set help, so he asked if I wouldn't mind waiting a little until he could collect a few cards for me.  I was okay with waiting, but I expressed how I would have been happy to just send the cards to him anyway.  He insisted.  Man, the blogosphere community is pretty terrific.

Here's what showed up in my mailbox last week: 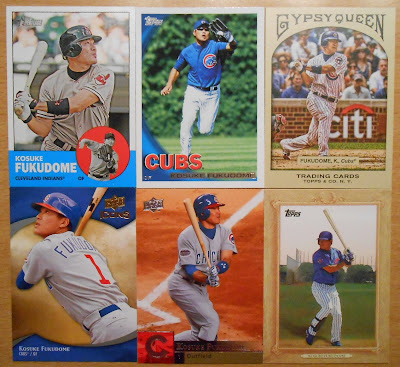 A half-dozen Kosuke Fukudome cards from Topps and Upper Deck that date back to 2009.

But wait, there's one more and it's pretty sweet! 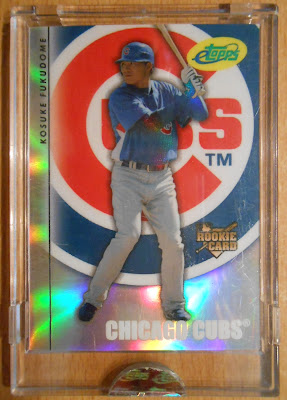 Yep, a 2008 eTopps card!  This one is numbered 841/1199 and is really slick looking.  I so want to crack it out of the case, and I totally would if I didn't already know where to store it.  Yet, it just so happens that I have a Mark Prior eTopps card, which is still in its case, that this Fukudome can keep company.  Oh, and for those of you counting at home, I'm up to seventy-eight different Fukudome cards.  Nice!

Next up, a couple of additions to my Sandberg personal collection.  First, we have a 2006 Fleer Greats of the Game card.  It's a nice horizontal card and it's only my second card of Ryno from 2006. 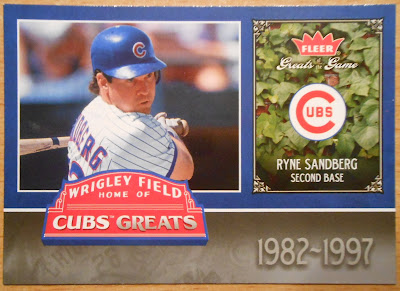 Last, but certainly not least, Jeff sent me a 2013 Leaf Ryne Sandberg promo card that was only available at this year's National Collectors Convertion.  Yes, I live within 125 miles of this past summer's show.  No, I did not go.   Why?  I'm still not sure why I didn't make more of an effort. 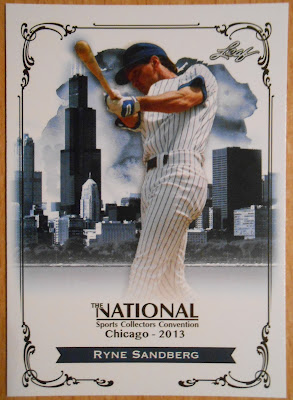 No matter, this is one sweet looking card.  Leaf did a nice job of avoiding its lack of a MLB license and even a better job of capturing the Chicago skyline that is seen here in the background of the card itself.  It's just gorgeous and an absolute catch for my Sandberg collection, which is now at 686 cards.

Thanks for a great trade, Jeff!  Good luck on completing the rest of the Oback set from '09!